Time could be running out for investors wanting to make nice profits from Rite Aid (NYSE:RAD) stock. The New York Post recently reported that the Federal Trade Commission (FTC) is only weeks away from making a decision that will likely approve the acquisition of Rite Aid by Walgreens Boots Alliance (NASDAQ:WBA).

If this report is correct, Rite Aid shares are poised to jump. Should investors buy the stock now? 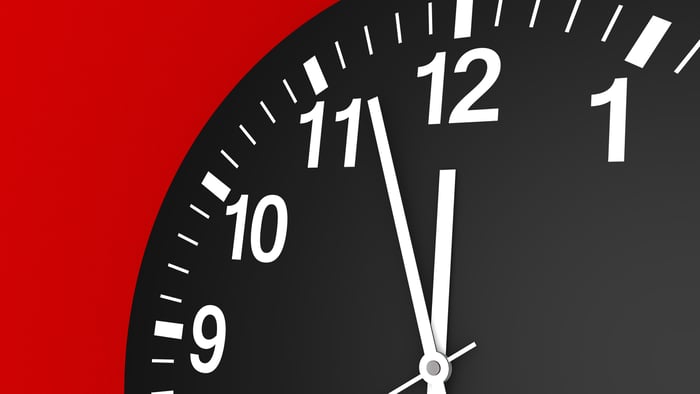 The New York Post article cited three unnamed sources. One of those sources seemed to be someone working with Walgreens in some capacity. The article stated that "a source with direct knowledge of the situation" said Walgreens was optimistic that FTC approval was forthcoming.

Two other anonymous sources indicated that a likely FTC approval of the Walgreens acquisition of Rite Aid would be announced within two to four weeks. The article provided no hints as to whether these sources were part of Walgreens, the FTC, or another party familiar with the potential deal.

Are these sources right? There are some factors that lend credibility to the reports. The biggest reason to suspect an FTC approval could be on the way is that Walgreens changed the merger proposal to sell off more Rite Aid stores in an effort to obtain a positive decision.

The time frame of a possible FTC decision also makes sense. One of the sources for the New York Post article said that Debbie Feinstein, current director of the FTC's Bureau of Competition, wanted to get the Walgreens-Rite Aid deal approved before she leaves the agency. The day after the article was published, the FTC announced that Tad Lipsky would become acting director of the Bureau of Competition effective March 6.

How big of a jump?

Should the deal win FTC approval, Rite Aid stock is poised to jump as much as 17% above the current share price. However, the increase could be smaller -- as little as 9%.

The actual increase depends on the details of the FTC decision. Walgreens originally expected that it would only have to sell around 500 Rite Aid stores to gain approval. The company later updated its estimate to less than 1,000 stores. In January, Walgreens increased the maximum number of Rite Aid stores that it was willing to sell off to 1,200.

If fewer than 1,000 Rite Aid stores must be sold, Walgreens will pay $7 per share to buy Rite Aid. If 1,200 stores have to be divested to win FTC approval, the buyout price will be reduced to $6.50 per share. The sale price will be prorated between these levels if the actual number of stores to be sold is more than 1,000 but less than 1,200. While the potential price range is well below the original Walgreens offer of $9 per share, it still represents a nice bump from the current Rite Aid share price.

Rite Aid shares tanked immediately after Walgreens announced new terms for the merger agreement. Investors who bought Rite Aid stock then would be in position to make at least a 24% profit if the FTC approves the deal.

The biggest winners, though, are those who bought Rite Aid much earlier. At the end of 2012, Rite Aid stock traded around $1 per share.

Even though it's too late to rack up gains as large as some shareholders could make, buying Rite Aid now could still turn a tidy profit -- assuming the FTC approves the Walgreens buyout. Keep in mind, though, that there's still a risk that FTC approval won't come through. "Unnamed sources" aren't the ones at risk of losing money if it doesn't.

If you're willing to take that risk, buying Rite Aid shares right now could be a smart move. But the clock is ticking.