It's always interesting to compare stocks like Caterpillar Inc. (NYSE:CAT) and United Technologies Corporation (NYSE:RTX). They both have exposure to the global economic cycle, and in particular construction markets, but their other specific end markets differ so much as to make them significantly different investment propositions. Moreover, Caterpillar's upside prospects come from cyclical strength in areas like mining, energy, and transportation, while United Technologies' largely come from management's successful execution of its plans to transition the company toward long-term growth.

It might seem unusual to start with valuation, but it helps to distinguish the investment case for each stock. The following chart shows analyst consensus for forward enterprise value (market cap plus net debt) divided by earnings before interest, tax, depreciation, and amortization (EBITDA). It's a useful valuation because it includes a debt consideration and an appreciation for future earnings -- an important point for a highly cyclical company like Caterpillar. 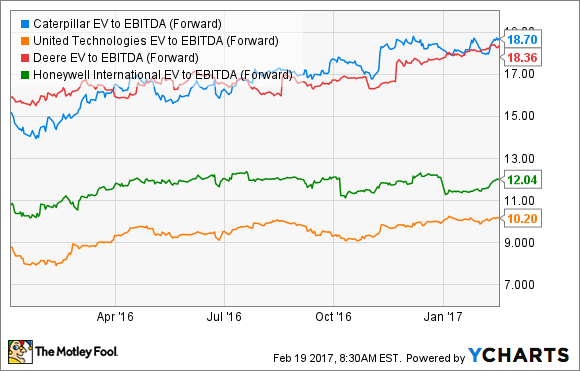 There are two points to note. First, Caterpillar is significantly more expensive than United Technologies -- but don't jump to any conclusions just yet. Caterpillar's valuation reflects its greater growth prospects in the next few years. For example, going by current analyst estimates -- see table below -- Caterpillar is set to grow strongly in 2018 as end markets, hopefully, turn more positive in 2017 and customers buy up existing machine inventory.

On the other hand, United Technologies' low valuation reflects its weak earnings prospects in the next few years, largely due to actions taken to ensure long-term profitability -- more on that later.

Which stock has better earnings momentum in 2017? The answer is unfortunately far from clear.

At the Credit Suisse conference in December, Caterpillar's management described analyst consensus for $3.25 in EPS in 2017 to be "too optimistic." The commentary helped walk down analyst consensus toward the $3.06 mark, and in the fourth-quarter earnings presentation in late January, management guided toward $2.90 for 2017. But here's the thing: A broad spectrum of companies made positive remarks on Caterpillar's main end markets (construction, energy, resources, transportation) in the last few months, including General Electric on energy and United Technologies itself on construction. 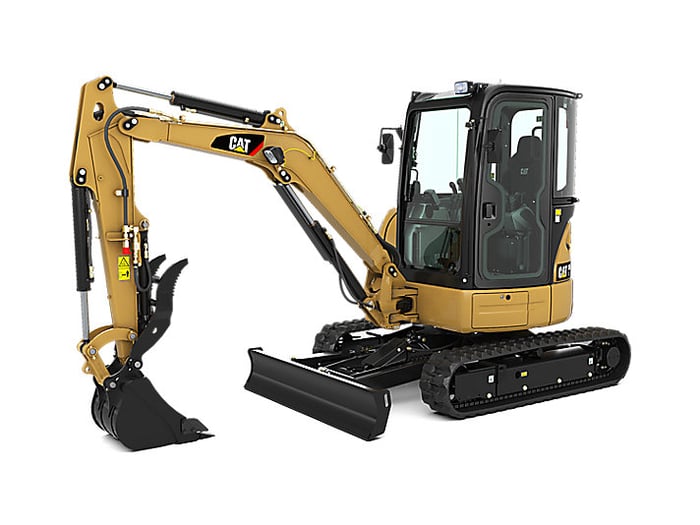 United Technologies' key focus in 2017 is successfully executing on its plans to transform three of its four segments. Otis elevators needs to regain market share with equipment sales so it can generate long-term service revenue, and Pratt & Whitney needs to ramp up production of its new geared turbofan engine. Meanwhile, aerospace systems needs to go through a period of margin compression while it replaces sales of higher-margin legacy products with newer, initially lower-margin products on new aircraft programs. For these reasons, United Technologies' profit growth will be limited in 2017 and in the next few years. 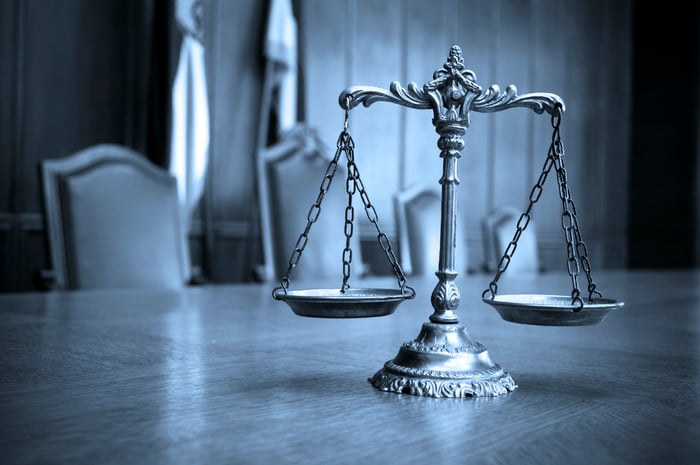 In short, United Technologies. While it's true that Caterpillar has more near-term earnings potential from a cyclical pickup in growth, it looks like the market has baked much of this in already, and there's always the risk that oil and resources markets could turn down again.

United Technologies also carries economic risk, and there is no guarantee that Pratt & Whitney will fully resolve issues with geared turbofan engine production, or that it will not have more problems. That said, I believe that when companies are in transition, and suffering near-term earnings headwinds, they should actually trade at a premium to the market. This is because the market should be pricing in an assumption of stronger earnings in a few years' time.

However, as you can see above, United Technologies trades at a discount. Markets aren't always right, and the current valuation discount should be enough to attract investors with a long-term perspective who believe its stock is on the right track.