This records storage and services company could be a great value for long-term investors.

High, sustainable dividends are great, but when combined with the potential for long-term growth, they can make investors rich. One stock that could fit this description is Iron Mountain (IRM -0.76%), a real estate investment trust (REIT) that specializes in the storage of records and data for more than 220,000 customers. Here's an overview of the company, and why it could make its long-term investors very happy.

As I mentioned, Iron Mountain's primary business is records storage, which it does in more than 1,400 facilities worldwide. In addition, the company has a document-shredding service that makes up a smaller portion of its revenue, as well as a growing data-storage business. 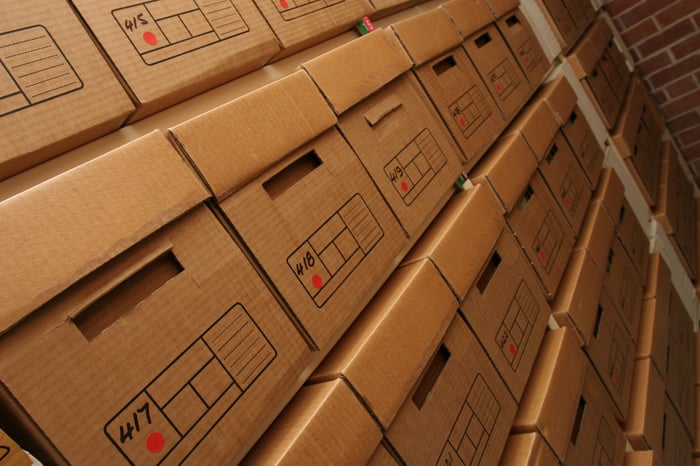 More than 220,000 customers in 45 countries around the world use Iron Mountain's services, and the company's client list includes 94% of the Fortune 1000.

From a long-term perspective, there are several reasons Iron Mountain could be a great investment.

For one thing, the company's records storage facilities are an extremely low-maintenance type of real estate. I've written before about the low overhead associated with the self-storage business -- as one point, leading self-storage REIT Public Storage has said that it could break even with just 30% of its units occupied, thanks to low maintenance and turnover expenses.

Well, Iron Mountain benefits from a similarly favorable cost structure. In addition, the company doesn't have to worry about one of the worst risk factors to the self-storage business – turnover. While self-storage units are typically rented on a month-to-month basis, Iron Mountain's average lease has a three-year term, and the average item housed in an Iron Mountain facility has been there for 15 years. In fact, Iron Mountain's storage facilities currently operate at a gross profit margin of about 75%.

In addition, Iron Mountain's properties generate more revenue and produce better margin than self-storage and other types of industrial properties.

Iron Mountain has a plan in place to significantly accelerate its growth and increase its efficiency by 2020. As part of this plan, the company wants to increase its exposure to higher-growth emerging markets from 19% currently to 25% by 2020 by investing approximately $100 million annually on acquisitions in these markets. This situation could help Iron Mountain boost its internal growth rate and increase its return on invested capital from about 12% now to 14%.

In addition, Iron Mountain is focusing on adding adjacent businesses to complement and diversify its revenue stream. For example, in 2015, the company invested $78 million to expand its art storage business (a growing and fragmented $1 billion industry), a move it expects to produce annual returns of 13%. The company has also been investing significant capital in the highly growing data-center business.

As a final point, one of the best competitive advantages a business can have is being the top brand in its field. As far as safe records storage, data-management services, and document-shredding are concerned, Iron Mountain is the most trusted brand in the business.

Where Iron Mountain sees itself in 2020

As part of its "2020 vision," Iron Mountain laid out some projections for investors, if it achieves all its growth and efficiency objectives. Here's what Iron Mountain expects to achieve in just three years:

No stock capable of double-digit returns is without risk, and Iron Mountain is certainly no exception.

For one thing, the company derives almost 40% of its revenue from services (the document-shredding business as well as service-related aspects of its other operations), not from its real estate. This revenue stream could become vulnerable in tough economic times.

There are also risk factors in good economic times. Earlier, I mentioned how an advantage of Iron Mountain over other storage REITs is its longer-term leases. The other side of this situation is that it also creates a risk factor that could cause the company to underperform in prosperous times, since its income will be predetermined for several years in advance.

Iron Mountain does have a slightly higher leverage ratio (that is, debt) than I would like, although the company has a plan to significantly reduce its leverage by 2020.

Iron Mountain doesn't really have any direct competitors, at least not anywhere near its size. As I mentioned, the closest type of real estate to what Iron Mountain specializes in is self-storage buildings.

The best metric for REIT valuation is funds from operations, or FFO, which is a way of calculating earnings that's much more accurate for real estate than the traditional metric of net income. So here's how Iron Mountain stacks up against a couple of self-storage REITs. (Note: Leading self-storage REIT Public Storage hasn't provided guidance as of this writing, which is why it's not included here.)

Data source: Company financials as of 2/20/17. IRM and EXR had not yet released 2016 year-end results as of that date. Adjusted, or normalized, FFO figures were used, when available.

Based on the figures in the cart, I wouldn't call Iron Mountain particularly cheap or expensive right now. However, it's worth mentioning that the company is expecting 20% FFO growth in 2017, which would produce a significantly lower P/FFO valuation if the projections prove accurate.

Iron Mountain is in a class by itself in the records-storage business, and it has a plan in place to grow its revenue and expand into high-growth markets, while lowering debt and improving its efficiency over the next several years. If the company can achieve its goals, the current price could be a fantastic long-term entry point for this high-yielding REIT.