Paycom Software (NYSE:PAYC), a provider of payroll and workforce management software focused on the small and midsize business market, reported earnings results last week that continued the company's impressive growth streak. In addition to notching solid gains on both the top and bottom lines, the company's earnings call revealed a few additional items worth a closer look.

Lapping the first quarter of ACA revenue with ease

On the surface, fourth quarter revenue growth of 34.8% and full-year 2016 revenue growth of 46.5% both look like fantastic results. However, what made the quarterly growth number more noteworthy is that the company was up against an especially tough comparison due to a sudden surge of revenue related to the Affordable Care Act (ACA) that began flowing in the previous year.

In the fourth quarter of 2016 we lapped our first full quarter of ACA revenue from current clients. As a reminder, in Q4 of 2015 we also experienced a pull forward of clients that started early on our system to gain ACA compliance. As such, we were very pleased with our ability to post a 35% growth rate over this very hefty comp.

For context, in 2015, fourth quarter revenue grew 48%. Though the short-term boost from the ACA is now in the rearview mirror, Paycom's impressive quarter indicates there's plenty of opportunity ahead. The company guided for first-quarter 2017 revenue of $114.5 to $116.5 million, the midpoint of which represents 28% growth. That would be another outstanding result, given that the first quarter of last year saw revenue increase by a whopping 63% (also fueled by the ACA tailwind).

Paycom operates in a highly competitive industry, with several competitors offering similar products. However, whereas much of the competition's sales efforts are focused on larger companies, Paycom primarily targets businesses with between 50 and 2,000 employees, and appears to have carved out a successful niche among these smaller customers.

For 2016, Paycom's retention rate (the percentage of revenue retained from existing clients) was 91%, a figure that has now held steady for four full consecutive years. That tells me that Paycom's customers find real value in the platform, and more importantly, they aren't being poached by competitors offering lower prices. Indeed, Paycom claims it leads the industry in both customer satisfaction and retention.

CEO Richison weighed in with these thoughts on the company's competitive position:

As I survey the marketplace, I believe our strategic advantage is more significant than ever.

We believe that the trend of companies replacing multi single-function payroll and HR software solutions with the easy to use yet extremely powerful Paycom system is set to continue for several years.

Paycom's initial guidance for 2017 does point to growth slowing down from the unsustainable rates the company enjoyed for the last couple of years, but there should still be healthy increases in revenue and earnings. 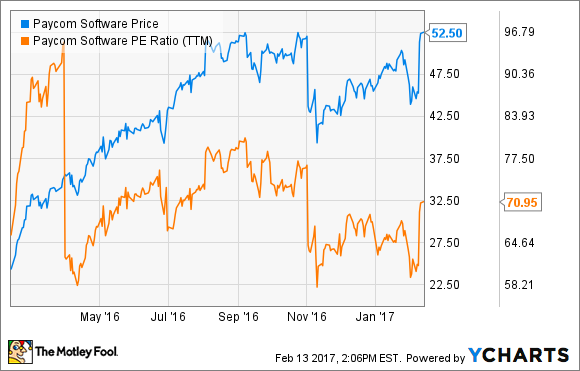 Mr. Market loved these fourth-quarter results, helping send the stock back near its 52-week high. Though Paycom's shares (currently trading at a P/E of around 70) will continue to bear the weight of sky-high expectations, I believe the company remains one of the most compelling long-term growth stories available to investors.