The restaurant industry has gotten extremely competitive in recent years. Well-established player Yum! Brands (NYSE:YUM), which is the driving force behind KFC, Taco Bell, and Pizza Hut, has seen competition from up-and-coming burger specialist Shake Shack (NYSE:SHAK), which went public only a couple of years ago. As consumers take sides on which approach to convenient meals is better, investors want to know which of these two stocks would make a smarter pick for their portfolios.

Let's look more closely at Shake Shack and Yum! Brands, using a set of key metrics to decide which one compares more favorably. 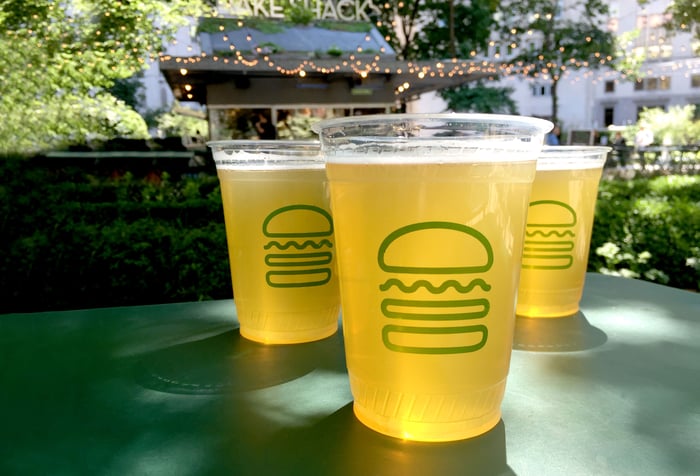 Yum! Brands and Shake Shack have seen their stocks move in opposite directions over the past year. Yum! Brands has been a big winner, posting a total return of 34% since February 2016. By contrast, Shake Shack investors have suffered a 6% loss over the same time period.

Yet even with Yum! having outpaced Shake Shack lately, the Taco Bell operator retains a clear valuation advantage using simple earnings-based metrics. When you look at trailing earnings over the past 12 months, Yum! Brands stock trades currently at a multiple of around 16. That compares to a high price tag of 82 times trailing earnings for Shake Shack.

Admittedly, Yum! Brands has enjoyed unusually strong bottom-line results due to some one-time factors. But even when you look at valuations based on future earnings prospects, the gap remains. Yum! has a valuation of about 21 times forward earnings compared to a forward multiple of more than 60 for Shake Shack. Based on valuation, Yum! Brands looks like the more cheaply priced stock.

For dividend investors, there's only one choice between these two restaurant giants. Shake Shack doesn't pay a dividend, but Yum! Brands rewards shareholders with a yield of 1.8%.

Even though it wins by default, Yum! Brands has put together an impressive track record of dividend growth. For 13 straight years, the fast-food giant boosted its payout, with a late 2016 increase of almost 11% being typical for the company. With the spinoff of its Yum China unit, Yum! Brands' quarterly payout shrank, but it still represents a similar yield to its pre-spinoff level.

If you like portfolio income, Yum! is the obvious choice. Shake Shack likely has a long road ahead of it before it chooses to divert capital away from internal growth toward returning shareholder capital.

The restaurant business has been tough lately, and both of these companies have had their ups and downs. For Yum! Brands, 2016 was a solid year for the company, but there were definite signs of challenges. Same-restaurant sales for the entire network were up 1%, led by the strength of the KFC and Taco Bell concepts. However, the Pizza Hut unit saw comps fall 2%, and competition throughout the space threatened to hold back some of Yum!'s overall growth prospects.

The spinoff of Yum China will make Yum! Brands a more asset-light company, in large part because many company-owned restaurants have been in the Chinese market. Indeed, Yum!'s management expects to have all but about 2% of stores under franchise models by next year, and that will allow the company to cut its capital spending and boost capital return to shareholders.

Shake Shack, meanwhile, is still in the early stages of its high-growth phase. The company's launch of its first chicken sandwich about a year ago has gone well, giving customers an alternative to the old burger-heavy menu. Store opening activity levels have been on the uptick, and Shake Shack understands that it needs to expand and reach critical mass quickly in order to avoid losing any more time while its restaurant concept is popular.

Key initiatives, like rolling out its mobile ordering app and considering catering and delivery as options, could bolster growth going forward. But some investors are nervous about the staying power of the burger chain, and that explains, in part, why the stock has languished.

Yum! Brands looks like the smarter pick for investors in the restaurant industry right now, because Yum! sports lower valuations, a dividend, and clearer growth opportunities. That's not to say that Shake Shack doesn't have any chance of doing well, but based on current conditions, Yum! claims the top spot.