For the second quarter in a row, U.S. Silica Holdings (NYSE:SLCA) reported a large uptick in frack sand sales. Also, for the second quarter in a row, those increased sales didn't translate into a positive earnings per share result. For investors that have watched oil and gas activity pick back up again and see demand for frack sand rise even faster, it might seem a little concerning that U.S. Silica can't make a profit.

Looking at the numbers for the quarter, though, it seems as though this could be just a bump in the road toward generating both profits and significant returns. Here's a quick run down of U.S. Silica's results and why fretting about this quarter's lack of net income may be an overreaction. 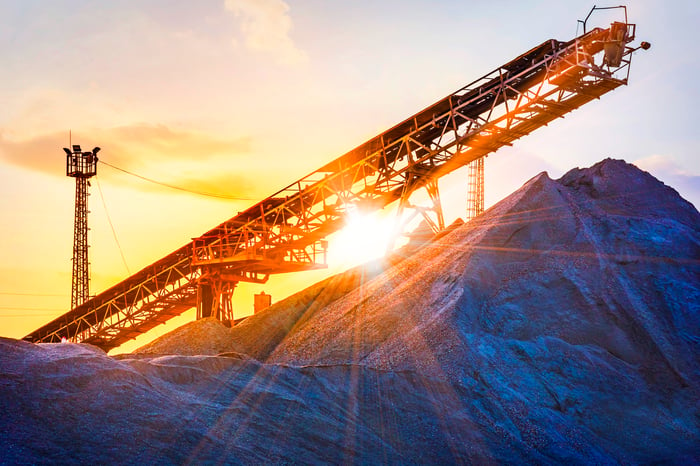 So there is good news and bad news in this most recent report. The good news is that sales of frack sand are back on the rise, and fast. Total volumes shipped in the oil & gas segment for the fourth quarter were up 34% compared to this time last year to 2.1 million tons. This led to a 55% increase in revenue for the oil & gas segment to $137 million.

The reason that it didn't quite translate to much higher profits was because costs of goods sold increased rather significantly as well. This is to be expected, though. For several quarters the company was looking to idle equipment and facilities to cut costs. Now that demand is back on the upswing, it needs to spend some extra money to get those facilities back up and running. As the upswing continues, these fixed costs for start-ups should dwindle and should lead to higher margins.

On the industrial & specialty product side of the business, things remained rather steady. Volumes and revenue were down a bit compared to this time last year, but it was able to cut costs in this segment that led to improved margins. 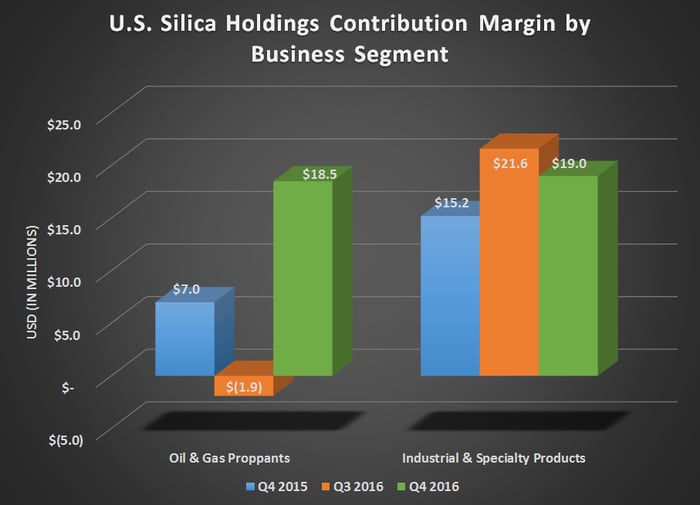 Overall, this was actually a pretty quiet quarter for the company aside from the uptick in revenue. Part of this lull may be because it had made two acquistiions lately and it's now integrating those assets, but it also looks like the company is loading back up on dry powder to make some more moves. U.S. Silica issued about 10.3 million in new shares -- including the 1.3 million shares that the underwriters took as an option -- that added $467 million in cash to the balance sheet. According to the press release announcing the equity offering, the company said that it intends to use the cash for potential acquisitions.

This sentiment was echoed in the company's investor day presentation where management said there was "Potential to aggressively expand capacity for Oil & Gas segment."

One place that we can expect some of that spending and acquisition to go is U.S. Silica's transportation and logistics network. The company is making a big push into producing and delivering sand from source to last mile. Much of the success in this will depend on the company's most recent Sandbox acquisition. This sand hopper module is designed to lower delivery times by as much as 76%, and should help to increase market share as it makes for a more attractive offering for producers as they no longer need to worry about sourcing and logistics.

We saw a little bit of this strategy take hold as 75% of all volumes were sold in-basin compared to 54% this time last year. This means that more companies are relying on U.S. Silica's logistics network rather than trying to do it themselves.

U.S. Silica CEO Bryan Shinn sounded pretty optimistic in his press release statement. The company may be losing money today, but he sees the company turning around in a big way in 2017.

Despite the many challenges, we made substantial progress in 2016 to make our Company leaner, stronger, more flexible and ultimately easier for customers to do business with, all of which we believe will enable us to further extend our industry-leading positions in both our Oil and Gas and Industrial and Specialty Products segments.

Looking ahead at 2017, we see strong demand for both sand proppant and last mile logistics in our Oil and Gas business and believe we have the right strategy and are well positioned to capitalize on these favorable market trends. For our Industrial segment, demand in most of our end use markets is anticipated to stay strong and we expect to continue to roll out new, higher margin products to drive bottom line growth.

There are two ways you can look at this most recent earnings report. You can be disappointed that a big jump in sales couldn't translate to gains in net income, or you can be excited for the future as this bump in costs means things are ramping back up again at U.S. Silica. Personally, I tend to think the latter, but we will only be able to tell in the coming quarters as these idle facilities get back up to speed.

The big question for U.S. Silica is whether or not the company's big bet on transportation and logistics of frack sand will pay off. Management obviously sees an opportunity here, but we will have to wait and see if it can generate the kinds of returns that investors will expect as frack sand demand rises in the coming quarters.