The third quarter of 2016 seems to have been the turning point for oil and gas activity in the U.S. The first shred of evidence supporting that claim is the recent results at frack sand producers. U.S. Silica Holdings (NYSE:SLCA), the nation's largest sand supplier, recently reported a rapid rise in sand volume sales, and it wasn't entirely a result of the company's most recent acquisitions.

Here's a quick peek at U.S. Silica's most recent earnings report and what the combination of its recent moves and this industry uptick will mean for the company.

The one discrepancy worth noting in these results is that the company had some one-time charges related to the two acquisitions that were completed in the third quarter. Without those charges in place, earnings per share would have been closer to a $0.13 per-share loss.

Like the other major frack sand suppliers this past quarter, U.S. Silica benefited rather nicely from an uptick in oil and gas activity that drove higher sales volumes. Total volume of sand sold in its oil & gas proppants business increased 21% from the sequential quarter and was flat year over year. One thing that stands out in U.S. Silica's results compared to those of its peers is that the sequential sales increase was actually higher than the volume increase. A large reason for this was the company's ability to keep its in-basin sales -- a higher ticket price product -- at 65% of total sand sales for the quarter. All of these things helped push the contribution margin for its oil & gas proppant segment to almost breakeven range. 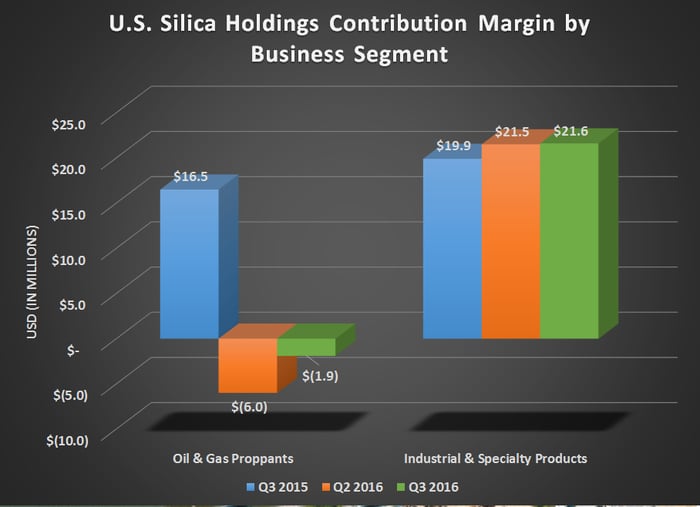 Another thing to note is that U.S. Silica's industrial & specialty products continued to deliver solid results that helped to ease the pain of the oil & gas segment. The operating profit this part of the business produced in recent quarters has been a major factor in keeping U.S. Silica's balance sheet in much better shape than its frack sand peers.

Total debt and shares outstanding increased in the quarter, but that was mostly related to paying for NBR Sand and Sandbox Enterprises. Once we get a full quarter of results with both of these assets in the fold, it will give us a better idea of how they affect the bottom line.

Overall, this quarter was about two things for U.S. Silica: integrating its most recent acquisitions and improving operating efficiency through better logistics. One of the big differentiating factors for sand companies is their ability to directly sell their product in the basin where it will be used. Those with railcars and other logistics assets can lower transportation costs while also charging a slight premium to customers directly at the basin.

That's why U.S. Silica's wanted to point out that it had teamed up with oil services provider Halliburton to deliver a record unit train of sand. It sounds like a pretty innocuous thing, but more cars per train -- and hence more tonnage per train -- will cut down on costs and deliver more sand directly to a basin faster. It also just so happens that this was delivered to the Permian Basin, the most active shale basin in U.S. right now. If U.S. Silica can make it a habit of delivering large unit trains in-basin, it will help give revenue an added boost that its peers haven't shown they can replicate.

Our team showed tremendous discipline and determination during the quarter to successfully integrate two major acquisitions while continuing to move our base businesses forward. With the additions of Sandbox and NBR Sands, we can further maximize value for our Oil & Gas customers by having the widest raw sand product offering of anyone in our industry and the only commercially viable last-mile containerized delivery solution. On the industrial side, we continue to benefit from the inherent value of ISP to generate consistent cash flows to cover fixed costs in a downturn while providing a platform for growth going forward.

U.S. Silica has been probably the only frack sand provider in the industry that's been working from a position of strength in recent quarters. It was really the only one of its peers that was able to maintain some level of financial discipline and not be in danger of defaulting on its debts. This is what allowed the company to make those acquisitions over the past two quarters in an attempt to grab market share while the rest of the industry was suffering.

This quarter wasn't anything special earnings-wise, but it did show that U.S. Silica is relatively well positioned as the demand for frack sand picks back up again. It's not too much of a stretch of the imagination to see the company doing very well in 2017.