CONSOL Energy Inc.'s (NYSE:CNX) earnings have fallen for three consecutive years, with the last two dipping well into the red. Its bottom-line performance suggests that it's struggling to keep its head above water. However, a deeper analysis of the situation hints at a brighter outlook. Indeed, this one-time coal miner has been working aggressively to change gears and become a natural gas driller. It could be closer to completing that industry shift than you may think.

You can trace CONSOL Energy's business transition back to around 2010, when it bought the exploration and production assets of Dominion Resources (NYSE:D), materially increasing its stake in the Marcellus Shale region. This decision, however, pushed long-term debt from $364 million at the start of the year to a heavy $3.1 billion by the end. Long-term debt as a percentage of the capital structure went from a reasonable 17% to over 50%. 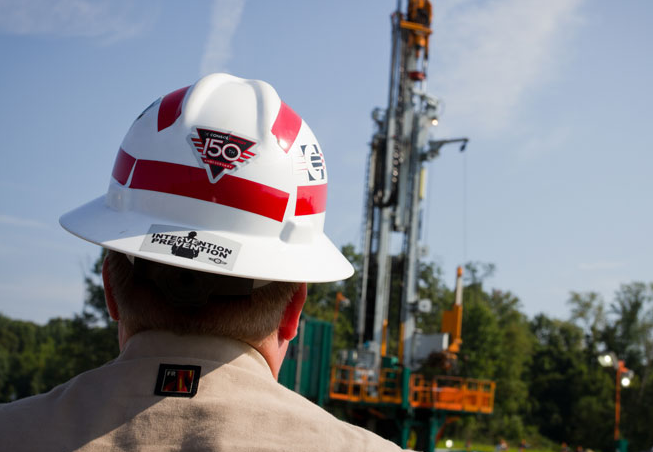 That's why CONSOL started to sell assets. In 2013, CONSOL sold five coal mines to privately held coal miner Murray Energy and, perhaps more important, material associated liabilities. In 2014 and 2015, CONSOL created CNX Coal Resources LP (NYSE:CCR) and paired up with Noble Energy (NASDAQ:NBL) to create CONE Midstream Partners LP (NYSE:CNXM). These last two moves gave the company the ability to slowly sell non-core assets over time, continue to retain some level of control over them, and benefit financially from the growth of those businesses because of its general-partner interests.

Since that point, CONSOL has continued to sell non-core assets while expanding its drilling operations. However, with an upturn in the coal market, it now believes it has an opportunity to either sell its remaining coal assets or spin them off to shareholders. In other words, the transition to a gas driller could be nearly complete.

Meanwhile, and perhaps because of historically low natural gas prices, the company's drilling business has been getting better at what it does. For example, CONSOL has been able to improve its well performance by over 120% since mid-2015. From a big-picture view, things are going in the right direction structurally and operationally, even if the bottom line remains mired in red ink. 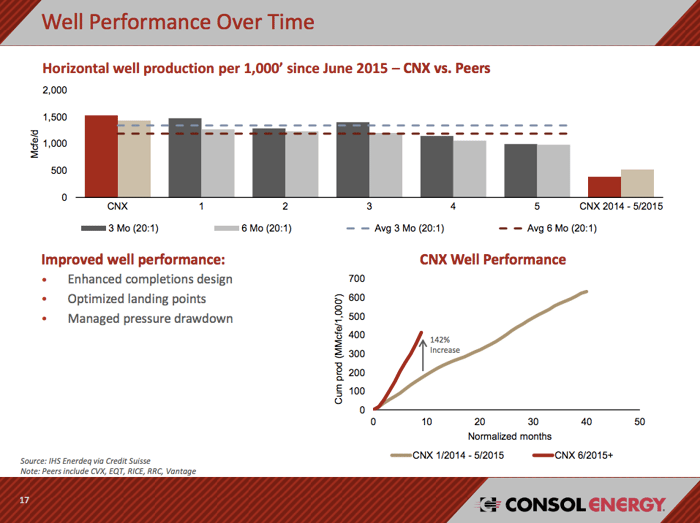 CONSOL's gas business is getting better at what it does.  Image source: CONSOL Energy.

And, of course, CONSOL's heavy debt load remains a big concern. It has fallen from $3.1 billion in 2010 to $2.7 billion (or so) at the end of 2016. That's roughly 40% of the capital structure. It's an important improvement, and directionally it's going the right way, but it certainly isn't a huge improvement over a five-year period. CONSOL is looking to sell another $400 million to $600 million worth of non-core assets in 2017, which should keep the debt level trend headed in the right direction.

Part of the problem, however, is that it costs a lot of money to grow gas production. For example, although CONSOL is getting better at making every dollar count, it plans to spend around $500 million on drilling in each of the next two years -- more than twice what it spent in 2016. That's a lot of money, and it means it will be that much harder to pay down debt. 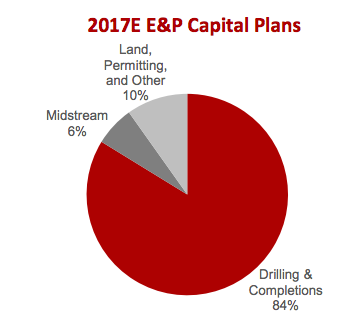 CONSOL is spending a lot on drilling in 2017.  Image source: CONSOL Energy.

But that spending is important for the gas business, where production advanced around 20% in 2016. And while 2017 should see only a modest 5% uptick, production growth in 2018 is projected to be in the high teens. Although debt reduction was a priority in 2016, a significant portion of the company's cash flow is likely to be earmarked to support its drilling efforts this year and next, with nearly $1.7 billion available on a $2 billion bank facility if it needs some extra leeway. So it has plenty of liquidity to keep drilling while it continues its long shift away from coal, even though long-term debt is still a notable issue.

Going from coal to gas hasn't been a smooth transition for CONSOL Energy. However, this one-time coal miner saw the writing on the wall early and appears headed in the right direction. Debt remains an important issue to watch, but the moves it's made, such as creating a pair of limited partnerships and selling non-core assets, along with making material efficiency improvements in its drilling business, suggest it's making progress that's not yet showing up on the bottom line.

The transition isn't over yet, and CONSOL still has to navigate the liability side of its balance sheet, but it looks to have enough liquidity to keep moving forward while it balances growth against its legacy debt issues. And if it can finally sell the last of its coal business, the company's outlook will brighten materially. In the end, it looks increasingly as if CONSOL Energy will swim.