Soaring stocks get everyone's attention, and a stock that can quadruple in the space of just 12 months clearly has something going for it. Yet such strong performance doesn't happen very often, and when it does, investors usually wonder whether they're too late to see any further gains. The answer varies from stock to stock.

In the case of Petroleo Brasileiro (NYSE:PBR.A), California Resources (OTC:CRC), and Natural Resource Partners (NYSE:NRP), some positive trends have lifted their shares, and it's possible that continued strength in their respective industries could produce even bigger gains going forward. 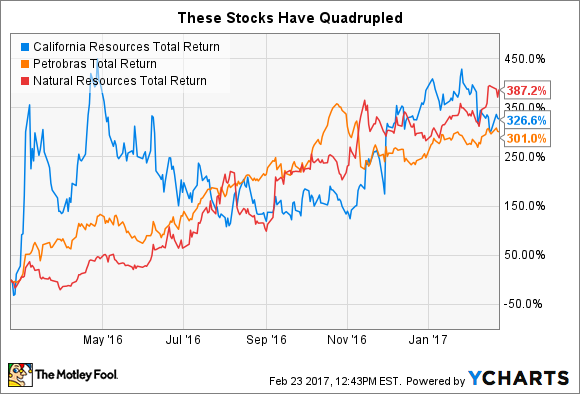 The energy market's crash in 2015 hit oil and gas companies hard, but it was only one of many problems that Petroleo Brasileiro faced. The state-run enterprise had to deal with falling oil prices at the same time that the Brazilian economy was cooling off dramatically from its heady times during most of the 2000s. Allegations of corruption involving government officials linked to Petrobras also weighed on sentiment.

However, Petrobras made substantial headway during the year to solve its problems. Restructuring efforts to divest assets were met with strong support from investors, and favorable production data from some of its holdings showed that the company had plenty of good future prospects. Plans to reduce debt encouraged shareholders, and the easing of restrictions on the state-owned entity made it easier for Petrobras to prioritize its opportunities. The company's preferred shares actually outperformed its common shares, although both performed very well. More broadly, the rebound in the Brazilian economy has investors getting more excited about the country in general and Petrobras in particular. As long as it continues to make headway in reforming itself at the same time that an energy recovery continues, Petrobras should help lead the Brazilian stock market higher.

Closer to home, California Resources has seen the same positive moves in the energy market affect its business favorably. As its name suggests, the oil and gas producer focuses entirely on prospects within the state of California, and the crude oil price declines in 2015 created massive losses for the small exploration and production company. But rising prices in 2016 helped make California Resources profitable again. Buying back its debt at a discount helped California Resources improve its balance sheet, and the company maintained production levels while cutting costs by becoming more efficient.

Moreover, falling production levels abroad could point to higher prices yet to come. OPEC's decision late last year to curb production benefited California Resources even more than some of its peers. The stock also gained the attention of investing legend George Soros, who took a small position as part of a broader bullish play on energy. If conditions remain favorable in the oil and gas market, then California Resources will be in a good position to capitalize.

Finally, Natural Resource Partners gained the most of these three stocks, and its emphasis on an out-of-favor segment of the natural resources industry is the primary reason. Natural Resource Partners focuses on coal production, and for much of the year, prospects for coal looked dire. Other products, such as construction aggregates and soda ash, weren't able to make up for coal's weakness and in some cases faced challenges of their own.

Yet the presidential election pointed to the potential for a rebirth in the coal industry. Promises to bring back coal as a viable part of the U.S. energy policy have sent coal stocks soaring, and if government policy succeeds in driving more domestic manufacturing and production, then coal producers like Natural Resource Partners could see demand keep climbing. Even with the gains, the coal producer's shares are still down more than 80% since 2013, but that shows how much more upside Natural Resource Partners might have if coal returns to favor.

Stocks that quadruple are few and far between. Yet each of these stocks has climbed in response to improving conditions in their industries, and although the pace of their growth will necessarily slow, that doesn't mean it will stop entirely.