The nation's largest trash hauler and landfill company had a big year. But industry challenges aren't going away.

Fourth-quarter earnings should have been the icing on the cake for Waste Management, Inc. ( WM -0.44% ). But the candles were decidedly dimmer as the company missed analysts' earnings expectations for the first time all year. That was in stark contrast to rival Republic Services, Inc. ( RSG -0.24% ), which reported on the same day and met expectations.

That said, there was a lot for investors to cheer in Waste Management's quarterly and full-year 2016 earnings report. Here are three of the most important things you should know. 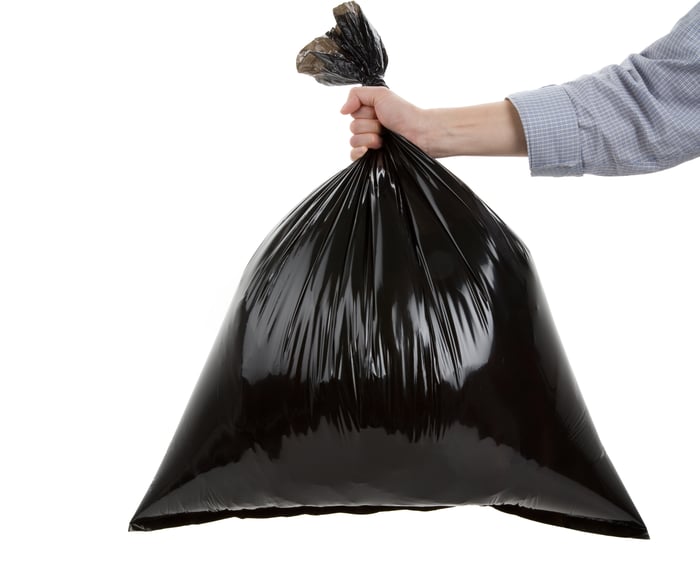 The bread and butter of a waste management company is volume. The more trash it hauls, the more junk it puts into its landfills, and the more recyclable goods it processes, the more money it generally makes. And the good news for investors is that the trash just keeps on flowing.

The company's solid waste volumes (or more specifically, internal revenue growth as a result of increased solid waste volumes) were up 1.6% for the full year, representing a 210-basis-point improvement over 2015. Overall volume (including recycling volume) was up 1.4% for the year, a year-over-year improvement of 300 basis points. Fourth-quarter results were even better, with volumes up 2% year over year. While this is good -- because it means the company's business is growing -- it's not particularly surprising. The population and the economy both grew in 2016, and more people and more businesses naturally make more trash.

CEO Jim Fish spun the numbers this way: "2016 demonstrated that we can maintain pricing discipline and grow high-margin volumes, while delivering exceptional customer service." This seems to be accurate. Customer churn at Waste Management is quite low. In fact, full-year churn dropped in the fourth quarter to 9.1%, the lowest since 2002. That's critical for the company, because it doesn't matter how much trash people are throwing away if it's not landing in Waste Management's trucks or landfills. But for now, at least, Waste Management is doing a good job of keeping its customers (and their trash) away from competitors like Republic Services.

Recycling prices are still up

One of the big boons to Waste Management's third quarter 2016 earnings was a spike in prices for recycled material. After the international market for recycled material started slumping in 2011 -- largely due to reduced demand from China -- Waste Management's recycling division became a drag on the company. It was no longer able to sell the recycled goods it collected at a profit, so it began selling off or closing its recycling facilities. But in Q3, that changed. The big question at the time, though, was whether this was a momentary blip or a sustainable trend.

Well, it wasn't a blip, since prices remained higher in the fourth quarter and again had a positive impact on the company's bottom line. For the year, average commodity recycling prices at Waste Management's recycling facilities improved 8.6%, and volumes grew 0.8%. Fish revealed on the earnings call that average commodity prices have continued to rise in 2017 and are now up $40/ton from the lows the company experienced in January 2016. But it's probably still too early to call it a trend, and to its credit, management isn't counting its chickens. Waste Management is still cutting costs in its recycling division, lowering operating expenses 2.4% for the year.

The combination of cost-cuts and improving prices and volumes helped contribute EPS growth to the tune of about $0.09 for the year, or about 30% of overall EPS growth. That's a significant chunk, but I'd want to see at least another couple quarters of sustained price stabilization before pricing this into the company's value. For its part, Waste Management believes these prices are not sustainable through 2017.

As Fish stated on the earnings call, 2016 was an unmitigated success:

But for all of 2016's successes, the company is tempering expectations for 2017 somewhat. It anticipates volume growth to mitigate, to between 1.2% and 1.6%, and it cautions that it will have tough comps to contend with.

That said, the company is still predicting strong results, particularly in terms of EBITDA and free cash flow. Fish predicts EBITDA growth of between 6.5% and 8%, only slightly down from 2016's 8.1%. Waste Management will still spit out gobs and gobs of cash, with free cash flow anticipated to be about $1.5 billion to $1.6 billion compared to 2016's record $1.6 billion. The shareholder-friendly company bought back about $725 million in shares in 2016 and paid $726 million in dividends. It expects earnings per share to jump from 2016's $2.91 into the $3.14 to $3.16 range.

Those numbers only seem lackluster if you measure them against a record-setting 2016. Its free-cash-flow per share easily trumps Republic Services', and its stock trades at a lower price to earnings ratio, too.

There's a lot to like about Waste Management, and its prospects for the future seem strong. 2016 was a banner year for the company, featuring increased volumes, improved performance of its recycling unit, and record free cash flow and EBITDA. Plus it even pays a 2.3% dividend. Investors should feel secure about making an investment in this company.

There's Nothing Trashy About This Company

Is Waste Management Stock a Buy?