MeetMe's (NASDAQ:MEET) stock has spiked 40% over the past 12 months, and has provided two-year returns of more than 155%. But despite the gains, there are four key things that make me think this stock isn't a good long-term investment.

Investors may want to consider how the company's users are growing, problems with increasing competition, slow revenue per user growth, and the company's checkered past before sticking with this stock. 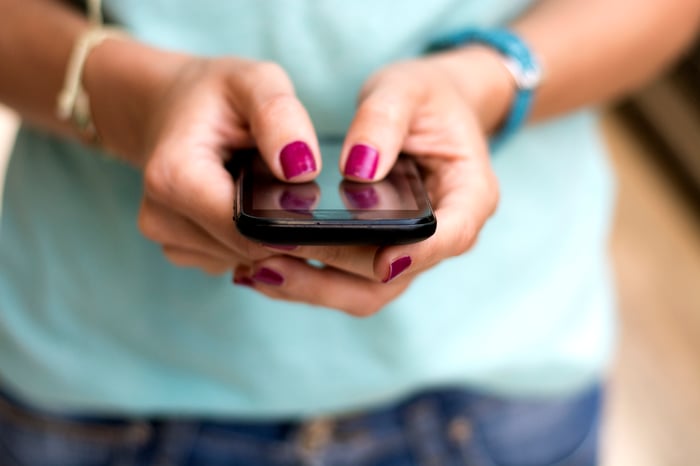 Major source of member growth is through acquisitions

There's nothing wrong with acquiring other companies so that a company can shore up its business or expand services. But MeetMe is a young company that appears to be growing quickly mainly through its acquisitions, and that's problematic.

Back in October, the company purchased one of its rivals, Skout, that helped bump MeetMe's total active users up from about 5 million to 8.5 million -- an instant user increase of about 70%.

But that's not organic growth. Young tech companies like MeetMe should be able to see fast user growth without having to rely on acquisitions. Additionally, the company is keeping the two apps running separately, but allowing users from both platforms to interact with each other. Ideally, the company needs to roll these into one app.

MeetMe markets itself as a way to meet new people, which could be just for friendship, or for dating. The latter puts MeetMe in the same competitive space as Tinder, which is far-and-wide outpacing MeetMe's growth.

Tinder currently has 50 million active users, compared to MeetMe's 8.5 million, and Tinder users check their app 11 times per day and spend 90 minutes on it every single day. Those stats are a huge hurdle that MeetMe isn't likely to overcome any time soon.

The Skout acquisition helped MeetMe's revenue improve in the third quarter by 20% year over year, and pushed up mobile revenue by 39%. But average revenue per user (ARPU) increased just 5% year over year.

Just like with organic user growth, MeeMe needs to see ARPU growing much faster at this stage. The company will live or die by how much revenue it can bring in per user, and right now it's not growing anywhere near as fast as it needs to be.

Back in 2015, MeetMe made a Huffington Post list that it probably wasn't thrilled about: "6 Adult Dating Apps That Teens Are Using Too." Both Skout and MeetMe were on the list, and while it's not terrible news in and of itself, it points to some other problems MeetMe has had.

In 2014, a San Francisco's City Attorney's lawsuit contended that MeetMe enables sexual predators and child stalkers. The suit said, "MeetMe improperly collects personal information from young teens -- including their photos and real-time locations. It then distributes that information in ways that expose children to very serious safety risks." The city attorney, Dennis Herrera, said that dozens of children had been victimized as a result.

The company ended up settling the lawsuit with San Francisco a year later and the city attorney later said, "Company officials thoughtfully and responsibly considered the violations we alleged under California law, and ultimately aspired to remedies even beyond those we sought."

While MeetMe made an effort to fix its problems, it's run into other instances of sexual predators using the app to target minors in New York as well.

MeetMe said last year that it "has a proprietary age bracketing system to prevent adults from communicating with and viewing the profiles of minors (and vice versa)," and that "MeetMe never pinpoints users on a map, or gives their exact locations." The company also said that about 40% of its workforce is devoted to regulating the content on its apps and websites. But after so many problems in recent past -- and my own skepticism about MeetMe's ability to keep the bad guys out -- this simply isn't a stock I'd want to hold onto.

Sure, MeetMe's stock price is up 40% over the past 12 months, and the company has managed to grow revenue and users. But honestly, there just seem to be too many risks associated with MeetMe right now that make it a stock I wouldn't touch -- and one that I'd sell if I owned it.