A common mistake income investors make is chasing high yield stocks. While it's important for a dividend stock to offer a decent yield, it's more important to check if that dividend is supported by healthy earnings and free cash flow growth.

If companies are spending over 100% of either their earnings or free cash flow on dividends, then a dividend cut could occur. Let's take a look at three stocks that fit that profile -- Mattel (NASDAQ:MAT), Abercrombie & Fitch (NYSE:ANF), and Pearson (NYSE:PSO). 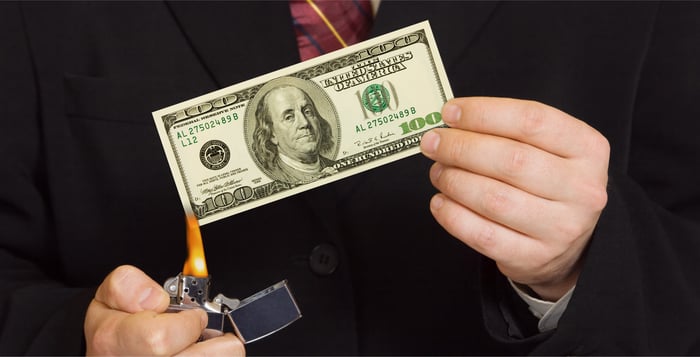 Mattel's forward yield of 5.8% looks tempting, but a closer look indicates that dividend could be cut soon. The toymaker spent 145% of its earnings and 225% of its free cash flow on dividends over the past 12 months -- which isn't sustainable unless those figures rise substantially this year.

Analysts expect Mattel's revenue to rise just 6% this year, due to tough currency headwinds, waning sales of its Monster High dolls, and its loss of the Disney Princess license to Hasbro last year. On the bottom line, earnings are expected to rise 38% this year -- if it successfully launches new higher margin product lines.

Income investors might be attracted to Abercrombie & Fitch's forward yield of 6.6%, but that dividend consumed 470% of the company's earnings over the past year. Abercrombie bulls will note that that figure was distorted by its weak EPS growth, and that the dividend payments only used up 42% of its free cash flow during that period. That means Abercrombie isn't funding its dividends with debt, but its earnings still can't cover its dividends. That's why Abercrombie hasn't raised its dividend since 2013.

Over the past few years, Abercrombie and many of its peers were crushed by the rise of "fast fashion" retailers like H&M and Zara, and the growing importance of e-commerce over brick-and-mortar sales. Abercrombie's slow-moving, higher priced apparel fared poorly against these rivals, and consumers shunned its branded logo apparel. The company also still hasn't hired a full-time CEO to replace Mike Jeffries, who resigned in late 2014.

That's why Abercrombie's comparable store sales have fallen year-over-year for 15 straight quarters. Analysts expect the company's revenue to fall 5% this year and for its bottom line to stay in the red -- which bodes poorly for its future as an income stock.

Times have been tough for Pearson, the largest publishing and education company in the world. The company has struggled with a severe cyclical downturn in higher educational courseware, rising leverage, and weakening cash flows. Pearson initiated three restructuring plans over the past five years to tighten up its business, but those efforts failed to rekindle investor interest in the stock.

Pearson might sell its stake in Penguin Random House in the near future, but it's unclear if the move will provide it with anything more than a short-term cash flow boost. Pearson has a trailing yield of 7.9%, but it announced that it would "rebase" that dividend in fiscal 2017 (which started on Jan. 1) based on its future earnings growth forecasts. Pearson will likely officially cut its dividend when it reports its 2016 full-year earnings on Feb. 24.

That cut shouldn't surprise investors, since Pearson spent well over 300% of its free cash flow on dividends in fiscal 2015. Pearson is also based in London, so the disparity between the weakening pound and the strong dollar will take another bite out of its semi-annual dividend payments for ADR shareholders. Analysts expect Pearson's revenue and earnings to respectively fall 24% and 32% this year -- so investors shouldn't expect the stock to become a stable income play anytime soon.

Investors should remember that companies with wobbly revenue, earnings, and free cash flow growth are also likely to have falling stock prices. Over the past five years, Mattel has declined nearly 20%, Abercrombie has dropped 75%, and Pearson has fallen almost 60%.

Those steep losses would have wiped out any gains from your dividend payments. Therefore, it's important to look beyond a stock's yield to see if it's actually a high-yielding dividend trap.