Please ensure Javascript is enabled for purposes of website accessibility
Log In Help Join The Motley Fool
Free Article Join Over 1 Million Premium Members And Get More In-Depth Stock Guidance and Research
By Andy Gould - Mar 1, 2017 at 9:50AM

The online travel company's shift to direct booking caused growth to grind to a halt -- for now.

The shift from an advertising-based business model to the transaction-based model known as instant booking seemed like a great idea for TripAdvisor (TRIP 3.76%). Instead of shipping customers off to another website to complete their transactions, why not capture a piece of that booking revenue directly on the company's own website? Long-term, this strategic move should help TripAdvisor leverage its most prized asset -- its robust, growing community of users.

But short-term, this move has cost the company dearly. The company's fourth-quarter and full-year financial results, released in mid-February, showed that instant booking continues to create multiple headwinds for the business, with 2016 revenue declining 1% and GAAP (generally accepted accounting principles) net income declining 39%. This is a stunning reversal for a former high-flying growth company -- one that grew the top line by 32% in 2014 and 20% in 2015 -- so it's no surprise that the stock is trading near four-year lows as of this writing. Check out the stock price chart below. 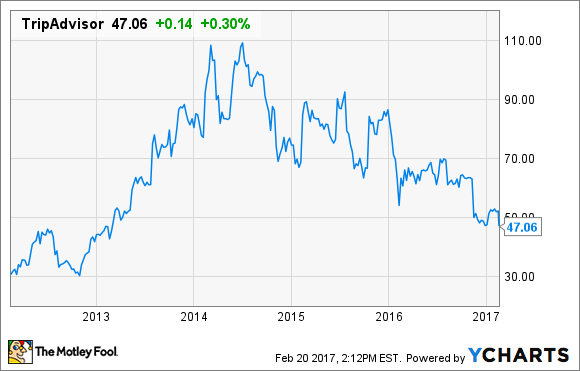 The rollout of instant booking has clearly caused revenue growth to stall out, with TripAdvisor management now admitting they were probably too optimistic about how quickly they expected consumers to adopt the new feature.

In terms of total revenue, after two consecutive quarters of declines in the first half of 2016, TripAdvisor returned to growth of 1% in the third quarter. Investors were hoping to see solid acceleration of top-line growth in the fourth quarter, but had to settle for an increase of just 2%.

With half of the company's monthly unique visits now taking place via phone, the struggles TripAdvisor has had getting mobile users to complete transactions are compounding its problems. In the third quarter, TripAdvisor reported mobile users monetized at just 30% of the rate for desktop users. For Q4, management did not update this figure, and the lack of other commentary around mobile trends suggests to me that there's not a lot of improvement happening here.

While some may argue that the outlook for TripAdvisor is cloudy at best, the fourth-quarter report contained a handful of reasons for optimism.

To start with, TripAdvisor's popularity hasn't waned. In 2016, average monthly unique visitors were up 14%, with user reviews and opinions growing 45% to 465 million.

The non-hotel segment (attractions, restaurants, and vacation rentals) continued its impressive growth, up 31% in the fourth quarter and up 27% for 2016. While it can't yet completely offset the struggling hotel segment, non-hotel revenue is now up to around 20% of total revenue, a number that should only increase over time, providing an additional driver for growth: 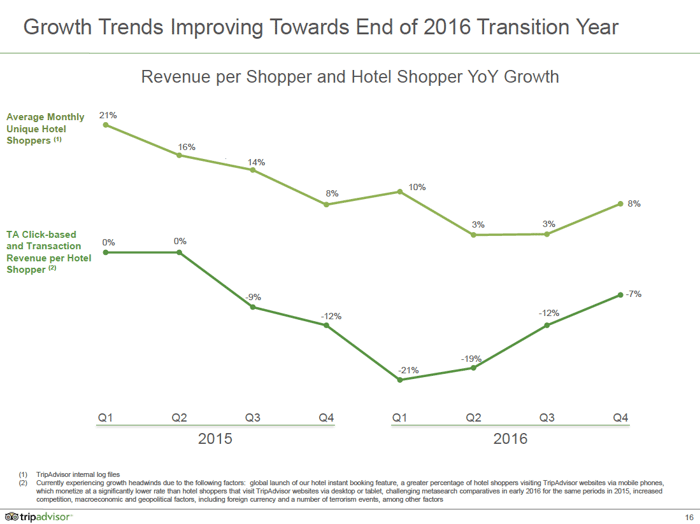 Perhaps most promising, as the chart above shows, growth in average monthly unique hotel shoppers finally showed some acceleration, ticking up 8% in the fourth quarter, after suffering negative or flat growth in five of the previous six quarters. As you can also see, after falling off a cliff in early 2016, click-based and transaction revenue per hotel shopper, while still negative year over year, improved for the third consecutive quarter. With the number of shoppers growing at faster rates again, and revenue per shopper trending back toward positive year-over-year growth, this looks like the light at the end of the tunnel.

TripAdvisor will begin lapping the one-year rollout of instant booking in non-U.S. regions during the first half of 2017, meaning that year-ago comparisons should finally start to get easier.

Based on these trends, TripAdvisor is targeting double-digit revenue growth for 2017, which would be a welcome return to significant top-line expansion. The company also noted that it expects adjusted EBITDA (earnings before interest, taxes, depreciation, and amortization) to be flat to negative year-over-year, mainly due to investments tied to increasing consumer awareness and adoption of instant booking.

For the patient investor, the potential here is still enormous

Management cited comScore studies showing that TripAdvisor influences 40% to 50% of all online hotel reservations globally. And yet the company said it currently benefits from only "a tiny fraction of those transactions." This highlights the disparity between TripAdvisor's ultimate potential and its current performance. Nearly half the world's hotel customers are researching travel on TripAdvisor's site or app, but completing their reservation on another platform. If instant booking can eventually change this dynamic, it's a multibillion-dollar opportunity.

TripAdvisor made a huge bet with instant booking, and shareholders are still waiting for that investment to bear fruit. If the company can get back to growth mode this year, all will be forgiven. But if TripAdvisor doesn't see an uptick in consumer adoption soon, its evolving business model will continue to come under fire.