Please ensure Javascript is enabled for purposes of website accessibility
Log In Help Join The Motley Fool
Free Article Join Over 1 Million Premium Members And Get More In-Depth Stock Guidance and Research
By Brian Stoffel - Mar 1, 2017 at 10:22AM

The growth of Vault has been astounding. And now, it's spreading its tentacles beyond Big Pharma.

Perhaps the most important thing for Veeva Systems is signing on new customers. Once a drug company puts its sales force, research and development (R&D) team, and others on the platform, they are loathe to switch. Not only would making a change be financially prohibitive, but it could create massive headaches and downtime while a company retrains its workforce. That's why there was so much good news in Veeva's release this week. 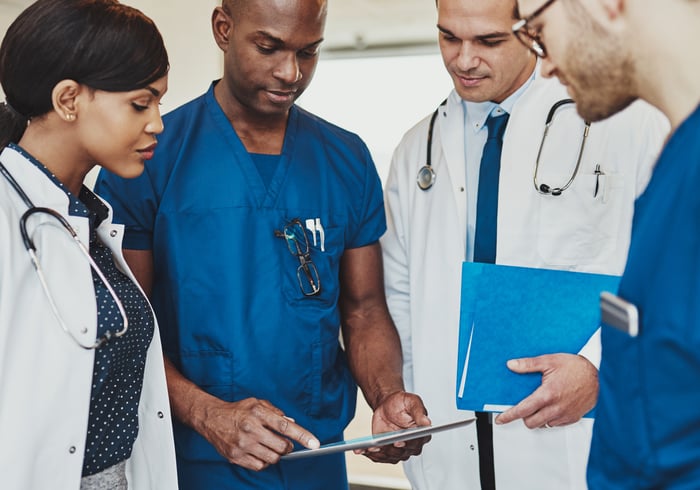 Before getting into the weeds, let's cover the headline numbers.

Both numbers came in ahead of management's own expectations and underscore the company's operating leverage. While revenue grew by 31%, expenses jumped by far less -- just 20%. Of that, R&D spending jumped 30%, sales and marketing expenses were up 21%, and general and administrative (G&A) costs were essentially flat.

This is exactly what investors had hoped for. R&D is crucial for the company's long-term success, and it needs continual reinvestment to ensure that Veeva is doing right by its customers. But the relatively benign jump in sales and marketing expenses shows that Veeva is getting more efficient in winning over customers. This is likely because Veeva is able to upsell its current customers onto more solutions, and because of word of mouth.

The key figures to focus on

While diving through numbers on the financial statements is interesting, that's not where the real story is. As I said at the beginning, if we look at the real-world moat that's being created by Veeva, new customers really matter. Compare where the company stands today versus where it was last March:

The growth of Vault has been simply astounding. Just two years ago, CRM was the bread-and-butter business, while Vault was the up-and-coming growth engine. But in just 24 months' time, Vault has grown an entire line of services that now represent a much larger customer base.

That base grew by 53% last year, a fact that wasn't lost on co-founder/CEO Peter Gassner. "In Q4, we signed our two largest vault deals ever. They are also our first deals with top 20 pharmas standardizing on the Vault RIM [regulatory information management] suite of regulatory products," said Gassner. This RIM suite is extremely important, as it helps pharmaceutical companies navigate the drug-approval process, bring a product to market, and maintain its market.

What investors need to realize is that these aren't one-time deals. They will very likely represent growing subscription revenue streams that (1) allow the company to continue reinvesting in itself, (2) further integrate the software within a drug company's DNA, and (3) give Veeva an informational data edge that will simply be unmatched. Those are powerful forces.

Gassner also highlighted geographical wins, with customers signing on to use Veeva's offerings in both Japan and Europe. But these details aside, the storyline remains the same: this company has clearly got momentum on its side and an ever-widening moat to protect it from competition.

Last year, Gassner announced that, because of popular demand, Veeva would start to offer Vault as a product outside of the pharmaceutical industry. More details were offered on that move in the company's conference call.

The company has started to narrow its focus on chemical, manufacturing, and consumer packaged goods (CPG) companies. As Gassner explained, "What we're looking for is, it's companies that are governed by some types of regulation or they have some type of health and safety concerns." Veeva will be offering a product dubbed Vault QualityOne -- which is a combination of Vault QualityDocs and Vault QualityManagementSystems (QMS).

For the upcoming fiscal year, the midpoint of management's revenue and non-GAAP EPS expectations are $658 million and $0.79. This represents growth of 21% and 7%, respectively.

Part of the reason for the dampened earnings-per-share (EPS) growth is reinvestment in the business. As CFO Timothy Cabral said in the conference call, "[it] represents our plans to invest aggressively across the areas of our business... like our newer Vaults products and our initiative to move outside of life sciences." Given the success that they've had, you can hardly blame them for making the decision.