Detroit's second-largest automaker, Ford Motor Company (NYSE:F), posted another monthly sales decline -- its fourth in the past six months. But February is a difficult month to judge, as sales are typically weak, but a holiday weekend can bring a boost.

"The holiday weekend is likely a contributing factor to strong sales in February, but we're also seeing signs that automakers are starting to be a bit more aggressive to move cars off the lot," Jessica Caldwell, Edmunds executive director for industry analysis, said in a press release.

Despite Ford's February sales decline of 4%, to 208,440 units, slightly below Kelley Blue Book estimates of 204,000 units, here are a few key points within the data that investors also need to consider. There are a couple of interesting takeaways from Ford's overall sales mix. On a positive note, sales of Ford-brand SUVs posted a record February result with more than 68,800 vehicles sold during the month. The SUV segment notched a 6% gain over the same month last year; it was led by the Escape, which posted a record February sales figure of 27,637 units.

On the downside of Ford's February sales mix was the percentage of fleet sales. Ford's total fleet sales generated 35% of total sales, which is higher than what investors are accustomed to, despite being 50 basis points below last year's percentage (due to 2016's fleet sales being front-loaded during the first half of the year). Ford's fleet sales account for a much-higher percentage of overall sales than those of its crosstown competitor, General Motors, which recorded only 20.5% of its total sales from fleet.

Another impressive month for F-Series

Another month and another impressive sales result for America's best-selling truck. Ford's F-Series posted an impressive 9% sales gain to nearly 66,000 units sold during February. It's the best February result for the F-Series line since 2004, and it continues the long-term trend of consistently increasing sales figures, as you can see below. 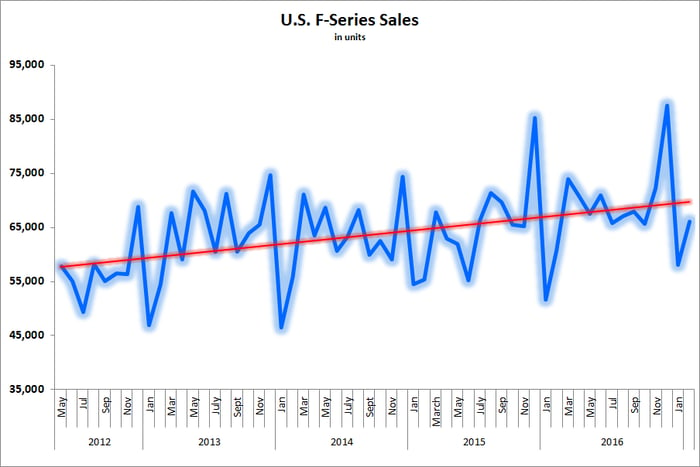 Unlike most of the automotive industry, Ford's inventories are actually tightening rather than increasing. In fact, Ford's gross stock, which includes in-transit vehicles, declined sequentially from 95 days' supply during January down to 79 days' supply at the end of February; the supply was also down from last February's supply of 84 days. Part of the decline in supply is due to SUVs, which have only 65 days' supply as consumers increasingly trade in passenger cars for larger vehicles. It'll be important for Ford to continue balancing its supply with retail demand as auto sales plateau in the U.S., but investors shouldn't be alarmed if gross stock increases in the short term as the company prepares for the upcoming spring selling season.

Ford wasn't the only automaker to have a difficult February. Fiat Chrysler Automobiles posted a 10% decline and Toyota's sales slipped 7%. Despite Ford's 4% decline, however, the company's inventory levels remain in a good spot and its transaction prices remain strong. For the months ahead, investors should focus on two things: incentive levels and fleet sales. Ideally, incentive levels would move slightly lower, and Ford's fleet sales as a percentage of total sales would drop back into the mid-20s.