Please ensure Javascript is enabled for purposes of website accessibility
Log In Help Join The Motley Fool
Free Article Join Over 1 Million Premium Members And Get More In-Depth Stock Guidance and Research
By Brian Stoffel - Mar 2, 2017 at 10:00AM

In this David-vs.-Goliath battle, we have a pretty clear winner.

In today's matchup of health-and-athletics-focused stocks, we have David versus Goliath. Nike (NKE 4.55%) -- King of Athletic Retail -- faces off against our underdog, wearable-fitness company Fitbit (FIT).

Even though there's a little bit of overlap in terms of the targeted demographics, these two companies couldn't be more different. Nike has a solid business that's time-tested and generates tons of free cash flow. Fitbit just endured an embarrassing holiday season that saw inventories swell and demand dip. 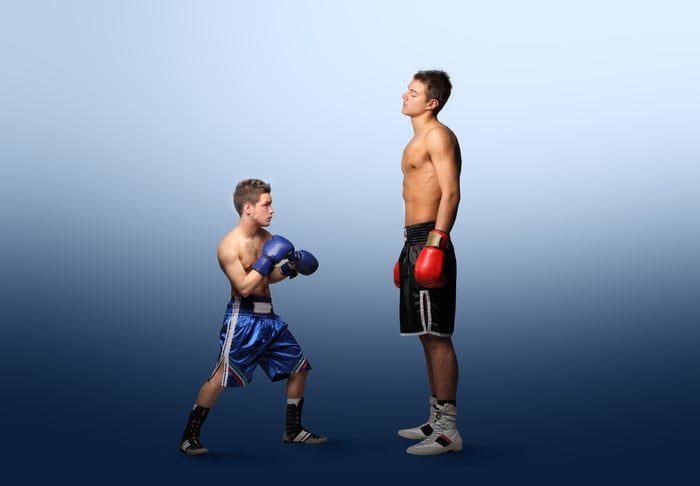 But which is the better stock moving forward? While that's impossible to discern with 100% certainty -- my crystal ball is currently in the shop -- there are three different lenses through which we can evaluate these two. Hopefully, doing so will help you decide which is the best bet for your own hard-earned cash.

This is, by far, the most important thing for investors to focus on. There are now metrics on the financial statements that will tell you how strong a company's sustainable competitive advantage is. But this concept, often referred to as a moat, is paramount. At its core, a sustainable competitive advantage is what keeps customers coming back for more, year after year. It also keeps the competition at bay for decades.

Nike's moat comes almost entirely from its brand. While some might scoff at a simple brand as being the key to one's advantages, let's remember just how powerful that swoosh is. According to a Forbes analysis, Nike's brand is worth a whopping $27.5 billion. That makes it the most valuable apparel brand on the planet, giving it pricing power over the competition -- an advantage that can compound returns for years and years.

Fitbit also relies heavily on its brand. But as a newly minted device company, that brand is nowhere near as strong. In fact, we're already starting to see something truly insidious for investors in the company: commoditization. Garmin, Misfit, Jawbone, and a host of others are joining an already-crowded field in wearable fitness. The company's less-than-stellar results in the holiday quarter show that this situation is starting to have an effect on the company.

Unless Fitbit can figure out a way to create an ecosystem with truly high switching costs, it will continue to struggle with establishing a moat.

Nike investors surely love the company for its dividend. Fitbit investors love it for its growth potential. But what both groups need to realize is that cash on hand is important. That's because every company, at some point or another, is going to face difficult economic times.

Companies that enter such times with cash on hand have options: They can outspend rivals to gain market share, buy back shares on the cheap, or even make acquisitions. Debt-heavy organizations are in the opposite boat -- forced to make ends meet to satisfy their creditors.

Here's how Fitbit and Nike stack up in terms of financial fortitude. Keep in mind that Nike is valued at roughly 65 times the size of Fitbit. And pay close attention to the fact that one's numbers are stated in billions, while the other is in millions.

Fitbit is lucky it entered the past year with no debt. That's helped the company stay afloat. But while a clean balance sheet is a definitely plus, the fact that the company is losing money and just barely free cash flow-positive is not a good sign.

While Nike does have much more debt than Fitbit -- even relative to size -- it also has tons of cash and generates a lot of free cash flow. The winner here is easy to call.

Finally, we get a chance to give Fitbit a little bit of love. While the company isn't technically profitable, it is free cash flow-positive. And the stock trades for just 11 times that free cash flow -- a very fair price. If Fitbit has another blockbuster product, or -- more importantly -- if it can design the aforementioned ecosystem, it could explode in value.

Nike, on the other hand, is much more richly valued. And the dividend it offers, while healthy and sustainable, is somewhat low.

So there you have it, Nike is the safer choice of the two stocks. While the stock might be more richly valued, the company has a stronger moat surrounding the business and a stronger balance sheet. That's enough to give the company the nod for now.