Royal Gold, Inc. (NASDAQ:RGLD) and Newmont Mining (NYSE:NEM) both make their money by selling gold. However, the way they go about getting precious metals is vastly different. And that helps explain why streaming company Royal Gold's slowly growing dividend is my pick here, while mining-industry stalwart Newmont's huge dividend growth potential comes with more risk than I'd be willing to accept.

When Newmont Mining reported third-quarter earnings last year, it also made a big dividend announcement. It increased the rates it pays in its gold-linked dividend policy. The most important change was at the low end, where dividends will double and triple in size at pre-set gold prices. There's no question that this is good news for shareholders, giving them a concrete return for their investment dollars. But Newmont is a miner. It has to find good places to dig for gold, go through the expensive and time-consuming effort of building a mine, eventually start the risky work of running the mine, and then begin the whole process over again when the mine runs short of gold. And all the while, it has no control over the price it receives for the commodity it sells. What could go wrong?

When gold prices were higher, Newmont let its all-in sustaining costs for mining an ounce of gold ballooned to $1,170 an ounce in 2012. It had no choice but to cut back when gold prices fell, eventually reducing its costs to around $900 an ounce last year. Those cost reductions are one reason it was able to adjust its dividend policy, but that just highlights the delicate dance between costs and gold prices. If costs creep up, it might have to change the policy again -- only this time in a less favorable manner.

And that doesn't even take into consideration the gold part of the equation. Gold is a highly volatile commodity whose largest uses are as a store of wealth and, well, jewelry. It's been heading higher lately, but a mood shift among investors is all that's needed to send it lower. 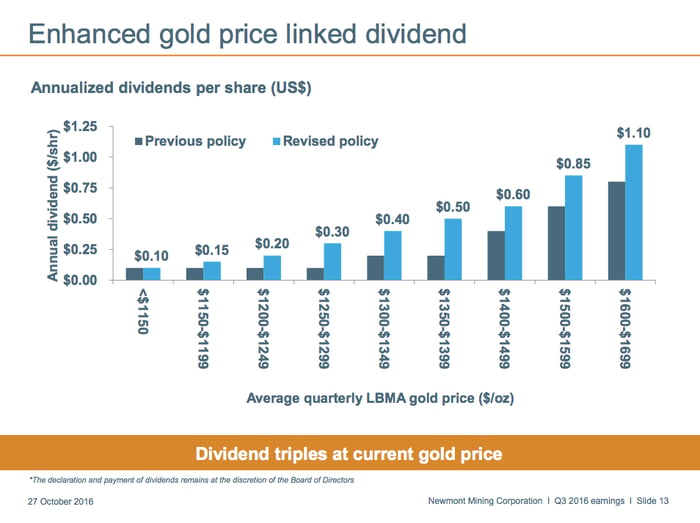 So when you look at Newmont's revised dividend policy, you need to think about the downside. A 3% or 4% decline in Newmont's realized price for gold could cut the dividend by 25% if it was at the $0.40-per-share, per-year level. That's a glass-half-empty view, but that's exactly the way an income investor trying to live off of his or her dividends needs to think here.

A different kind of gold company

That's why I prefer Royal Gold, which is a streaming company. That means it provides up-front cash to precious-metals miners in exchange for the right to buy gold at reduced rates in the future. This locks in low prices and creates a more steady business.

To give you an idea of how it works, in 2015 Royal Gold provided Barrick Gold (NYSE:GOLD) $650 million in cash while that miner was struggling to deal with low commodity prices. In return, Royal Gold will be able to buy gold and silver from the Pueblo Viejo mine at 30% of the spot price up to certain production levels and, thereafter, will pay 60%. It doesn't matter what gold and silver prices are -- even after the price increase, Royal Gold will still be able to lock in a nice profit when it turns around and resells the metals.

This low-cost model is one of the reasons Royal Gold has been able to increase its dividend for 16 consecutive years, even while gold prices were falling. In fact, falling prices are good for Royal Gold's business, because that's when miners are most desperate for cash. For example, the deals inked in 2015 allowed Royal Gold to increase its attributable reserves by a massive 20%. 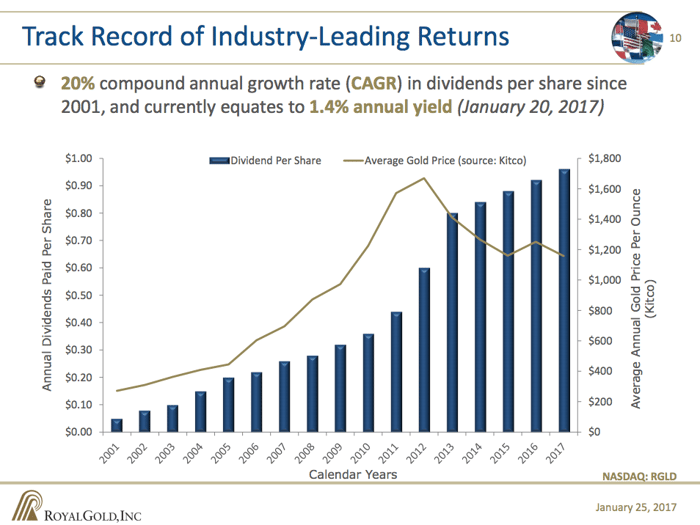 Royal Gold's dividend has gone up even when gold was going down.  Image source: Royal Gold, Inc.

Now, to be fair, Royal Gold's dividend increased only 5% or so in fiscal 2016, with 2017 likely to see a similarly modest jump. Newmont's dividend could double or even triple. But a slow and steady upward climb backed by a differentiated and conservative business model is more enticing than fast and volatile when you need those dividends to pay your bills over the long term.

Streaming company Royal Gold is more like a specialty finance company than a miner, locking in low prices in return for up-front cash. It's a more stable business than mining, capable of supporting a regular and slow-growing dividend: Royal Gold's 16 years of annual dividend hikes is proof. Sure, Newmont's dividend might rocket higher if gold rises, but it could fall equally quickly if gold declines. Gold is a highly volatile commodity, and I couldn't sleep at night knowing that my dividend checks could be eviscerated because of nothing more than a mood shift on Wall Street. Royal Gold is the better dividend stock, in my book.