The performance of Apple's (NASDAQ:AAPL) first smartwatch remains an open question, considering the fact that the company remains insistent on not disclosing Apple Watch's financial results with investors. CEO Tim Cook has long maintained that the decision around reporting "says nothing about our expectations," instead citing competitive reasons. Lacking official figures, investors have little choice but to rely on third-party estimates, for better or for worse.

Market researcher IDC has just put out its preliminary estimates on the wearables market for 2016, and there's a particularly troublesome data point for Apple. 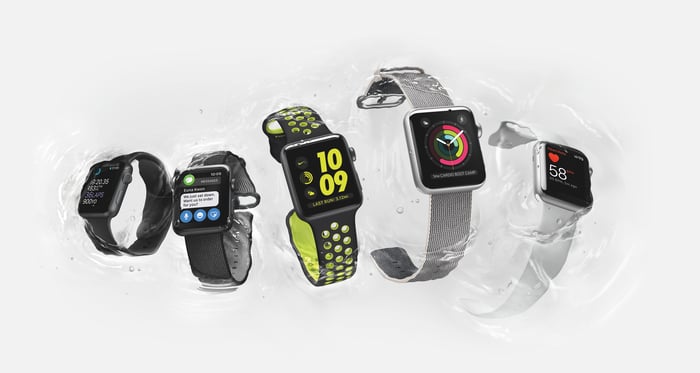 For the full year, Apple shipped an estimated 10.7 million Apple Watches, which was down nearly 8% from the estimated 11.6 million units that the company shipped in 2015. Here are the top five vendors:

It gets worse. The important context missing here is that Apple launched Apple Watch in April 2015, and wasn't able to meaningfully ramp production until June 2016. So the estimated 11.6 million Apple Watches that the company shipped in 2015 only cover two to three quarters out of the year, while the 10.7 million units for 2016 represent both a full year of availability and the second-generation update to Apple Watch Series 2.

There are a few ways you could attempt to justify the year-over-year decline. Perhaps the early adopter wave in 2015 was simply so strong due to years of rumors of a forthcoming Apple wearable feeding pent-up demand that it created a tough comparison for 2016. Maybe the expectations of a second-generation model dampened sales for Series 1.

There are a couple silver linings, chief among them being that Apple sold a record 4.6 million Apple Watches in the fourth quarter, up 13% from Q4 2015. That shows that Apple indeed enjoyed a busy holiday shopping season, and that the Series 2 updates were fairly compelling. Apple previously said that Apple Watch units and revenue were both at record levels last quarter.

It's also encouraging that the broader wearables market is still growing, up 25% to 102 million units for the year. Even if within the wearables market smartwatches are stumbling, the overarching secular trend of wearable technology remains intact. Apple is intent on being at the forefront of wearables (and even considers certain headphone products like AirPods as wearables for some strange reason), and as long as Apple continues to invest in an expanding portfolio of wearable products, it will shape the way.