Please ensure Javascript is enabled for purposes of website accessibility
Free Article Join Over 1 Million Premium Members And Get More In-Depth Stock Guidance and Research
By Evan Niu, CFA - Feb 1, 2017 at 10:00AM

The Mac maker notched a handful of new records in the fourth quarter.

It's been a while since Apple ( AAPL 3.55% ) posted a bona fide blowout quarter, but I think it's safe to say that last quarter qualifies.

The Mac maker set an all-time record high with quarterly revenue, which came in at $78.4 billion. That's a few billion higher than the $75.9 billion in sales that Apple generated a year ago, and above the high end of Apple's own guidance ($78 billion). Naturally, that was driven by strong iPhone sales, another record at 78.3 million. This all comes as the iPhone 7 was arguably the most incremental model update in years, keeping the same overall industrial design with no clear must-have feature. Combined with the perennial supply constraints, it's rather impressive that the company was able to move that many smartphones.

Two cameras are better than one

As usual, the iPhone was the star of the show, comprising nearly 70% of sales. While sales were up 5%, sell-through was up 8% thanks to robust demand. In line with CFO Luca Maestri's prediction in October, average selling prices (ASPs) bounced back sequentially with a vengeance. ASPs were depressed for a few quarters in 2016 following the launch of the $400 iPhone SE, but have now rebounded to $695 -- pretty comparable to last year's $691. 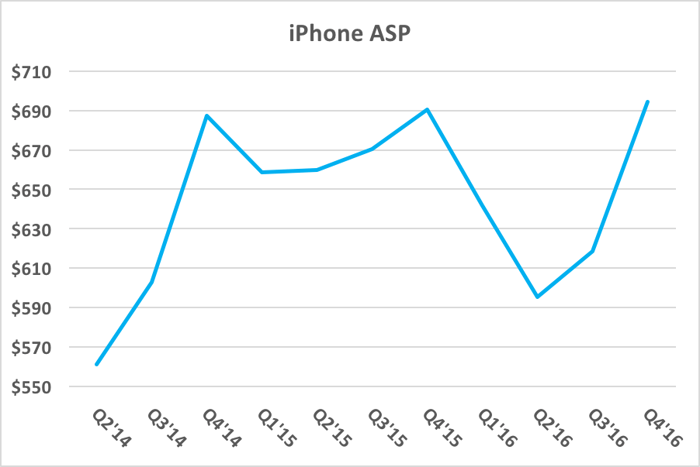 This tells investors a few things, some obvious and others less so. Clearly, the iPhone 7 Plus is a hit, likely due to the dual-camera system that is the most notable differentiating feature. On the earnings call, CEO Tim Cook noted that the mix was skewed toward the Plus models more than in any prior cycle (this is the third year that Apple has had Plus models with 5.5-inch displays). Cook even acknowledged later in the call that Apple did not predict iPhone 7 Plus demand very well, which adversely affected production plans.

Additionally, Apple finally increased the entry-level storage to 32 GB in 2016, at long last addressing an increasingly prominent customer complaint. The financial risk to that move was removing the upsell incentive, and the $100 to $200 that goes with it. If 32 GB of storage is sufficient, a larger proportion of customers may opt for the base model instead of upgrading; 16 GB has long been woefully insufficient, virtually assuring strong upgrade activity. The good news is that Apple has maintained a relatively comparable mix of upgrades, as evidenced by the strong ASP.

The fact that Mac revenue hit a new all-time high shows that Apple still has tricks up its sleeve. We're talking about a business that's over 40 years old, after all. The new MacBook Pros with Touch Bar were significantly constrained during the quarter, but the related price increase appears to have been able to help Mac ASPs by quite a bit. Mac ASPs jumped sequentially from $1,175 to $1,348; this is the first time in nearly three years that this figure was above $1,300.

There wasn't a whole lot of news on the iPad front, in part because Apple didn't update its tablet lineup in the fall. Apple sold 13.1 million units, down 19% from a year ago. iPad revenue fell more than that due to declining ASPs ($423). The more affordable iPads continue to prove rather popular. Cook said the company has some exciting things in the pipeline for iPad, potentially referring to the rumors around other display sizes or the Apple Pencil 2.

Apple's services business has just officially become a $25 billion business on a trailing-12-month basis. Management ambitiously hopes to double this business within the next four years, targeting $50 billion in annual revenue in 2020. That's an aggressive goal, but also in line with the company's efforts to shift investor attention toward recurring revenue sources.

CFO Luca Maestri noted that the App Store continues to be the main driver of growth, thanks to increased buying activity within the installed based as well as new users coming to the platform. The music business, including both downloads and streaming, has started growing again over the past three quarters. iCloud storage upsells are also growing "very quickly," as is AppleCare. Simply put, the plethora of services that Apple offers are all faring well.

Share repurchases came in at $11 billion, which included $5 billion in open market purchases and a $6 billion accelerated share repurchase (ASR) program. That's the ninth ASR for those keeping score at home. The company retired 65.3 million shares during the quarter thanks to these aggressive repurchases, which contributed to the record EPS due to its accretive effects.

That puts cumulative share repurchases at $143.7 billion out of the current $175 billion authorization. Apple updates its capital return program every spring, typically alongside its April earnings release. There's plenty of room to accommodate Apple's typical level of repurchases, and investors can look forward to an update next quarter.

In terms of fundamentals, the results were a blowout. Investor reaction, on the other hand, is another topic. Shares jumped over 4% in extended trading, and Apple hasn't traded around $125 since mid-2015. I still have doubts about Apple enjoying any semblance of multiple expansion, but the business is as strong as ever.