In its early days as a national player in the 1960s and 1970s, McDonald's (NYSE:MCD) had a unique product with local and limited competition. In the 1980s and 1990s, the fast-food market exploded, but the home of the Big Mac still mostly competed with other chains trying to offer cheap meals quickly.

McDonald's was the king of fast food. In the decades when quick, tasty, and cheap ruled, and the idea that patrons in a rush could hope for something better did not yet exist, the company dominated.

Somewhere in the 2000s, though, as chains like Starbucks (NASDAQ:SBUX), Chipotle (NYSE:CMG), Panera Bread (NASDAQ:PNRA), and others emerged, the equation changed. Fast food faced a challenge from fast casual, and McDonald's did not know how to compete.

The chains above offered comparable convenience to McDonald's along with higher-quality food that was, in many cases, better for you. It's a trend the Golden Arches has not handled well. The company has responded to it in numerous ways. These include failed attempts to offer higher-end burgers, and an embarrassing campaign where the chain tried to answer consumer doubts about its food via a question-and-answer program that mostly spread concerns rather than assuaging them.

Now, with sales in the United States sputtering, McDonald's CEO Steve Easterbrook and his senior management team have released their plans to grow the company. It's a plan that touches on some needed changes, but it's one that does not address the company's biggest problem -- its food just isn't that good and people can easily get better for not that much more money at places like Chipotle, Panera, Starbucks, and more. 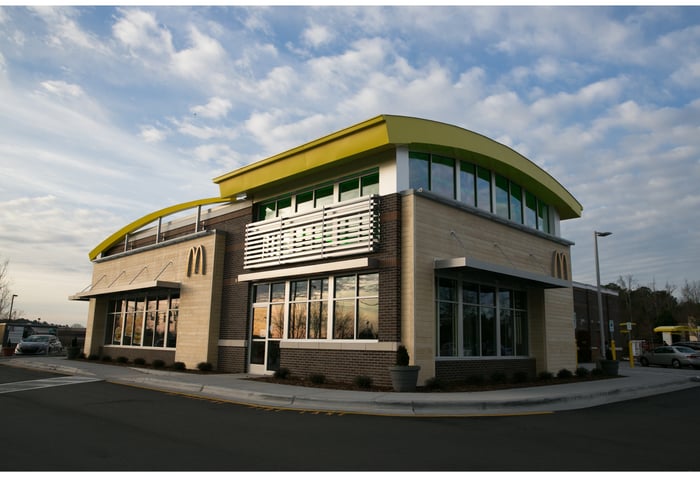 In the future McDonald's will have ordering via kiosks. Image source: McDonald's.

"To deliver sustained growth, we have to attract more customers, more often," Easterbrook said. "Our greatest opportunities reside at the very heart of our brand -- our food, value and the customer experience."

That sounds nice, and it's true -- more customers tends to equal higher sales -- but when you look at the plan the CEO seems to be putting perhaps not all, but most of his eggs in the technology basket. The company laid out the focus points for its growth plan at the top of the document and food is never mentioned.

There's nothing customers like to sink their teeth into more than some delicious financial targets with a side of operating margin. To be fair, later on the plan does mention that McDonald's has fallen behind in quality and it acknowledges the potential to grow McCafe and snacks, but food is never directly addressed.

Instead Easterbrook and his team lay out a program that's heavy on technology. The company has a clear plan to make ordering easier via kiosks, offer delivery, and catch up to chains like Starbucks and Panera which already offer technology-forward experiences.

Technology only solves half the problem

Before Chipotle had its E. coli scandal customers would line up in steadily growing numbers to wait for their hand-built orders, paying more for the privilege. Starbucks and Panera customers, even with mobile order and pay, still wait for their food in many cases.

Consumers have repeatedly shown a willingness to wait in reasonable lines and pay more for better food. That does not mean McDonald's shouldn't improve its technology -- both Starbucks and Panera have grown sales by being innovators in that area -- but it's not the core problem.

In addition, while McDonald's pointed out that in its top five markets (U.S., France, the U.K., Germany and Canada) nearly 75% of the population lives within three miles of one of the company's restaurants, delivery may not be the game changer the company expects it to be. The chain has succeeded with delivery in China, South Korea, and Singapore, but its core markets may be a different story.

First, delivery options in those markets have greatly expanded through third-party services, and second there's a reason pizza has always dominated delivery. Pizza travels well, it's easy to reheat, and it's even good cold. McDonald's food on the other hand tastes best when it's consumed as close to it being cooked as possible.

It's about the food

Most of the things Easterbrook has laid out will probably work in some way, but the company is wrong in thinking that convenience can trump quality. When consumers can go to a McDonald's or a better burger chain like Five Guys or BurgerFi, in many cases speed of service won't be the deciding factor.

Technology has helped Starbucks and Panera, but it's the cherry on top of the sundae. There are certainly cases where speed matters, but if McDonald's really wants to compete it should not merely improve the process, it should rebuild its menu from the ground up. The company has hinted at that by testing fresh beef and changing the chicken in its McNuggets, but this plan shows it's not the focus.

Going forward, if it really wants to change its business rather than just manage it better, McDonald's needs to offer higher-quality versions of its familiar favorites -- food that's recognizably food. That's not easy, and it creates a pricing challenge, but long-term it should be at least an equal focus alongside technology and process improvements.