NVIDIA is positioned to benefit from the growing demand for GPUs across several sectors of the economy to process a vast sea of data. 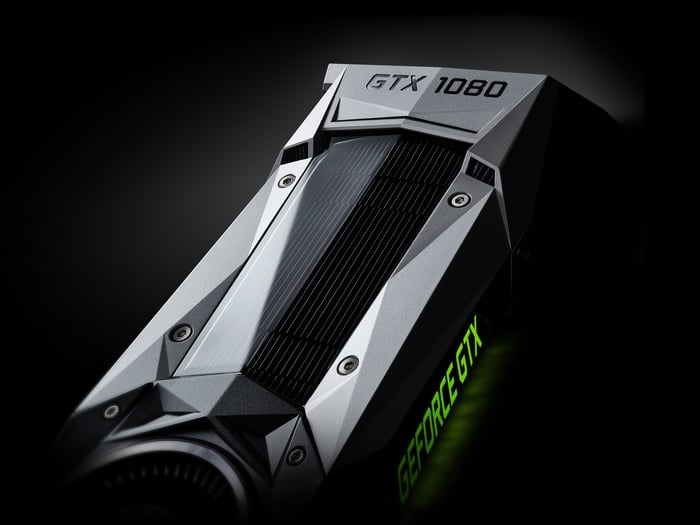 NVIDIA's (NVDA 6.98%) GeForce graphics cards have been its largest driver of growth in the past. Now, the same GPUs that have powered video games are being used by companies to process and analyze data.

Companies are using deep learning and artificial intelligence (AI) to teach computers to learn a task without human aid. It's a process that requires a massive amount of computation in real time, and the powerful GPUs are the only processors up to the task.

The largest tech companies like Amazon.com, Microsoft, Alphabet, and Facebook have used GPUs to process image and voice recognition. Demand for these applications has been the first phase of growth for NVIDIA's data center segment. According to NVIDIA CEO Jen-Hsun Huang, the next phase of growth will come from companies spanning retail, manufacturing, healthcare, and life sciences, among others.

Retailers are processing data with deep learning to better connect shoppers with an item they might want to buy. For example, Houzz -- an online interior design company -- has created a system that can recognize furniture and accessories from a photo and tell the person where to get those items for their home. If retailers can benefit from this technology, imagine what this will do for marketing. It will be harder than ever for consumers to avoid spending money as marketers use deep learning to know what you want before you want it.

In healthcare, researchers running a computer system powered by NVIDIA's GeForce GTX 1080 GPU are processing brain tumor tissue samples to help surgeons reduce the patient's wait time for diagnosis. Typically during surgery, it takes 30 to 40 minutes for the surgeon to send the tissue sample to the lab for processing, but a new system using deep learning is helping to dramatically reduce the wait time to only three minutes. It's still a work in process, but so far the system has a 90% accuracy rate over 30 samples.

Deep learning and AI is also being used for robotics in manufacturing. Berkshire Hathaway's ISCAR metalworking business is a good example of how manufacturers are using robotics and AI to run automated factories. NVIDIA's Jetson TX1 developer board -- a circuit board the size of a credit card -- can process live data from sensors and cameras to make drones and robots smarter.

In transportation, NVIDIA has recently announced partnerships with Volkswagen AG's Audi and Daimler AG's Mercedes-Benz to develop self-driving cars. Automakers will rollout self-driving cars this year that can partially drive by themselves, but will need human assistance. By 2020, more advanced levels of autonomy will be introduced where a car will be able to drive itself in all circumstances except conditions like severe weather.

Autosuppliers such as Bosch and Germany's ZF have also partnered with NVIDIA. ZF is one of the largest suppliers in the auto industry and the leading supplier to Europe's trucking industry. ZF is using its own self-driving system -- called ZF ProAI -- based on the NVIDIA DRIVE PX 2 AI car computer.

The ZF ProAI computer will launch in 2018 and will provide self-driving capability for commercial vehicles, such as forklifts and trucks, in the agriculture and mining industries.

NVIDIA likes to call the current rapid adoption of deep learning and AI a new industrial revolution. More specifically, we are in a GPU revolution. The graphics card is the new CPU as companies are using advanced computer systems and algorithms powered by GPUs to process massive amounts of data in real-time that a CPU cannot handle. As Intel powered the PC revolution of the 1980s and 1990s, NVIDIA is powering the deep learning revolution.

Recently, the NVIDIA segments that are benefiting from enterprise adoption of GPUs -- automotive and data center -- are showing high rates of growth, but these segments are still small as a percentage of NVIDIA's total revenue.  The combined revenue of automotive and datacenter was 19% of NVIDIA's total revenue over the last four quarters. The automotive segment has been growing anywhere from about 30% to 60% year over year, which is parallel to the gaming segment. In contrast, data center growth has been tripling year over year in the last two quarters.

When we consider all the ways businesses are utilizing deep learning and AI across different sectors of the economy, NVIDIA may just be scratching the surface of its market opportunity.