Two words spoken during a White House press conference erased a lot of market cap for marijuana stocks. White House press secretary Sean Spicer recently stated that there will be "greater enforcement" of federal laws concerning the use and sale of marijuana under the Trump administration.

Marijuana stocks tanked on concerns that sales could be hurt. Shares of Medical Marijuana, Inc. (OTC:MJNA), one of the largest marijuana growers in the U.S., dropped more than 20% in the aftermath of the press conference.

Immediate reactions in the market aren't necessarily indicative of long-term potential, though. How big will the "Trump slump" really be for marijuana stocks? 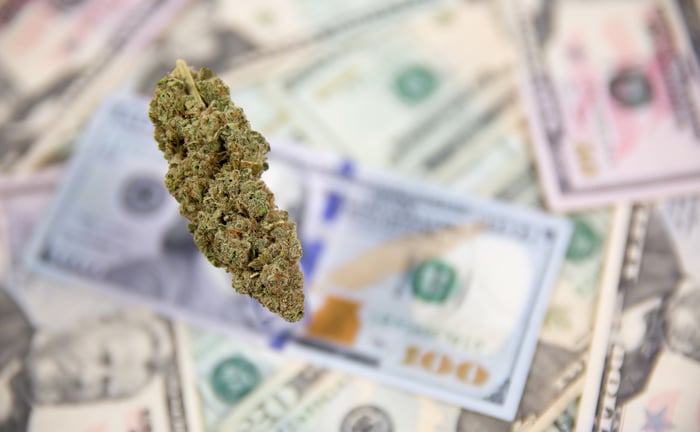 Although two words uttered by Spicer -- "greater enforcement" -- alarmed many investors, three other words mentioned in the press conference shouldn't be overlooked. Spicer stated that President Trump sees "a big difference" between medical and recreational marijuana.

He went on to explain that the president "understands the pain and suffering that many people go through who are facing, especially terminal diseases, and the comfort that some of these drugs, including medical marijuana, can bring to them." This distinction is important for assessing the potential impact of Trump administration policies on marijuana stocks.

The map below shows states that have legalized use of marijuana for either medical or recreational use. Currently, 28 states allow legal use of medical marijuana. Eight states plus the District of Columbia also allow recreational use of the drug. 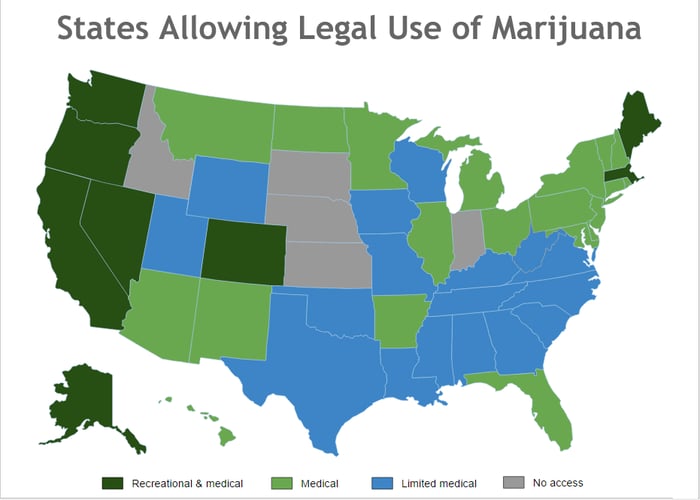 If the Trump administration does as Spicer indicated, the markets in states that have only legalized medical marijuana shouldn't be in jeopardy. The potential problem areas for marijuana stocks will be only in the states that also legalized recreational use of marijuana. Here's how the total U.S. population breaks down by type of marijuana legalization. 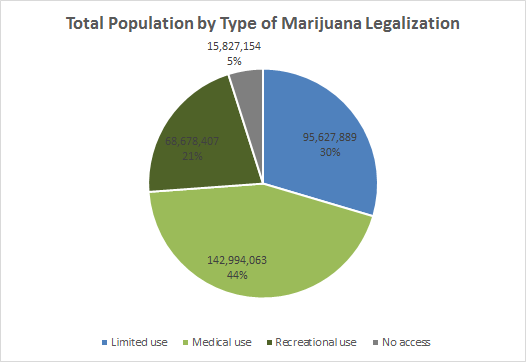 There's good and bad news for marijuana stocks based on this data. The good news is that the total population of Americans in states where medical marijuana is legal is enormous. And remember, the roughly 68.7 million residents of states allowing recreational use of marijuana also allow medical marijuana.

The bad news is that population data doesn't tell the full story. The Marijuana Policy Project estimates that 1.5 million or more patients across the U.S. use medical marijuana. The National Survey on Drug Use and Health (NSDUH) estimated that 19.8 million Americans used marijuana for non-medical purposes in the month prior to responding to the survey. Even though these numbers are only estimates, they show the potential market for recreational use of marijuana is much larger than the medical marijuana market.

So how bad could tighter enforcement of federal laws on recreational use of marijuana be? It's hard to say for sure, but we can do some back-of-the-envelope calculations that could give a hint.

If the Trump administration is successful at clamping down on sale of marijuana for recreational use, these ballpark calculations mean that the market size for marijuana growers could decrease from 6.7 million people to only 1.5 million. That's a much larger negative impact than current stock declines anticipate.

What happens next? There are a couple of big unanswered questions.

The first is how aggressively will the Trump administration actually pursue enforcement of current federal laws against marijuana use and sale. If there are only token actions, marijuana stock prices could rebound.

The second question relates to the effectiveness of efforts to prevent a potential federal crackdown on states that have opted to legalize marijuana. Expect those states to fight back in the court system.

It could be that the statements by Sean Spicer present only a bump in the road for marijuana stocks. However, there now seems to be a much higher likelihood that marijuana stocks are in for a deeper Trump slump than many (including me) expected.

How Big Will the Trump Slump Be for Marijuana Stocks? @themotleyfool #stocks $MJNA Next Article
Current