The handbag maker dipped on another weak earnings report. 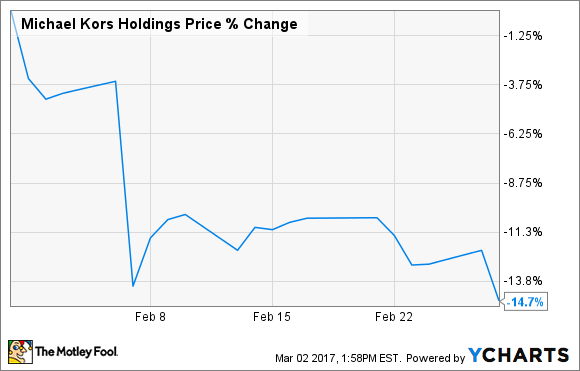 Like the department stores it relies on for sales, Kors has struggled with the rise of e-commerce, and both previous overexpansion and too much discounting may have sullied the brand.

The stock fell 11% on Feb. 7 as comparable sales crumbled, falling 6.9% in the key holiday quarter. Poor traffic at its retail partners also pushed overall sales down 3.2% to $1.35 billion, below expectations at $1.36 billion. Wholesale revenue was down 17.8%, which the company made up for in part by opening 193 stores since the third quarter of 2016.

On the bottom line, the company overcame falling net income with aggressive share buybacks, seeing earnings per share increase from $1.59 to $1.64.

CEO John Idol said he believed that "headwinds will continue throughout the spring season"; these include poor mall traffic and reduced promotions. Still, he was optimistic about long-term growth for the company.

After that prediction for the spring season, the handbag maker's guidance was unsurprisingly weak. For the current quarter, the company expects a drop in comparable sales in the low teens, and sees total revenue of $1.035 billion to $1.055 billion, representing a decline of 10% to 11.5% from a year ago. It also sees earnings per share sliding from $0.98 in the quarter a year ago to between $0.68 and $0.72.

Competitors like Coach have also faced similar setbacks lately, and the retail climate has pushed stocks across the sector down. At a price-to-earnings ratio of 8, the stock could easily recover if the company returns to growth, but problems seem likely to persist for a few more quarters at least.