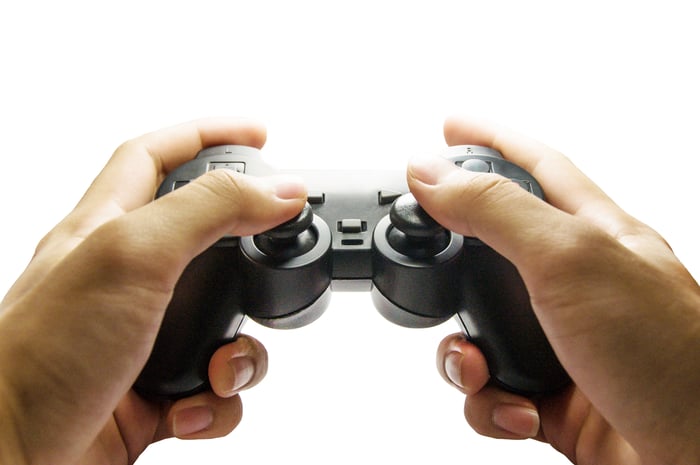 Depending on which research report you read, the size of the e-sports market ranges from about $500 million to nearly $1 billion.  What these reports agree on, though, is that e-sports is growing fast.

According to Newzoo's latest research, e-sports revenue will reach $696 million in 2017, an increase of 41.3% over 2016. These estimates are based on revenue generated from advertising, sponsorship, merchandise, ticket sales, and game publisher fees.

Large audiences at e-sports events around the world are drawing attention from major brands. By 2020, Newzoo expects revenue to double to $1.5 billion driven by brand investment. Coca-Cola sponsors the most popular e-sports tournament -- League of Legends -- which has drawn large audiences numbering in the tens of millions, rivaling the NBA Finals. Coca-Cola also partnered with select cinema partners to allow fans to view live e-sports events across more than 200 theaters around the United States, Europe, and Canada.

Other brands that have made an investment in e-sports as an advertiser or sponsor include Buffalo Wild Wings, Berkshire Hathaway's Geico, and Red Bull.

Buffalo Wild Wings is joining Arby's and Credit Karma as sponsors of ELEAGUE -- an e-sports league based on the console and PC game Counter-Strike: Global Offensive. Buffalo Wild Wings' investment is significant in that its success has been largely built on its involvement with televised sporting events. It's a clear sign that e-sports is emerging as a major sport on the same playing field as traditional leagues.

He added, "We're excited to partner with ELEAGUE as the popularity of eSports grows, and we'll continue to identify new ways for our Guests to enjoy an immersive sports experience in our restaurants."

Also, Walt Disney Co's ESPN recently announced an agreement with Electronic Arts' (EA 0.96%) EA Competitive Gaming Division to broadcast a live e-sports event in the United States. ESPN is already starting to cover e-sports with the same rigor as traditional sports. It has a section of its website devoted to e-sports news coverage.

We're expanding our competitive gaming portfolio to include events that also resonate with traditional sports fans, and EA's FIFA Ultimate Team Championship Series fits perfectly into how we intend to continue to serve eSports fans moving forward...The opportunity to reach this passionate audience globally in multiple languages is exciting, and we are pleased to do so as part of our long-standing relationship with EA.

Right now, e-sports is not a profitable market. Revenues are growing, but everything is reinvested back in to the e-sport economy. Still, game publishers and brands want to invest in e-sports because of the opportunity to reach a massive audience that is growing every year.

With estimates suggesting that the global e-sports audience will reach 385 million in 2017. Out of this audience, 191 million are estimated to be participants and 194 million spectators -- with the number of spectators expected to grow another 50% by 2020.

An important number highlighted in the Newzoo report is average revenue per fan, which is used by traditional sport leagues to measure how well a sport is monetized. This is estimated to be $3.64 in 2017 but is expected to increase to $5.20 by 2020. While this is significantly less than traditional sport leagues, that high rate of growth that is attracting attention from major brands.

Skeptics point out while a major e-sports championship can draw as many as 40 million like League of Legends, there are not many e-sports events like this throughout the year, making the comparison to major sport leagues invalid.

On a revenue basis, e-sports is not on the same level as the $5.9 billion value of all 30 teams in the NBA, for example. However, we're in the baby stages of sector. The NFL and NBA have been around for decades. As more e-sports leagues are started in the future, and the sport begins to form the structure of a major professional league, there is the long-term potential for the value of e-sports to reach into the billions. E-sports has the audience, and game publishers are now starting to test ways of monetizing that audience.

Until now, many e-sports events have been isolated championship tournaments. E-sports hasn't had long regular seasons spread over several months like traditional sports leagues because there hasn't been the financial backing to structure a league with a long regular season and playoff.

But now we are starting to see game publishers step up with that commitment. Two important new leagues to watch are Activision Blizzard's (ATVI 1.90%) Overwatch League and Take-Two Interactive Software's (TTWO 2.75%) NBA 2K eLeague. Activision Blizzard will soon start selling teams for Overwatch League to prospective owners this year, and the NBA and Take-Two just announced the formation of its own professional e-sports league based on the best-selling NBA 2K franchise.

E-sports is a marketing tool to increase engagement

The interest for game publishers is the same as big brands. Publishers see the opportunity to scale up game titles on a global level and expand the audience for a particular franchise. In fact, Activision Blizzard designed Overwatch specifically for the purpose of competitive gaming, and the popularity of Call of Duty is based primarily on the nature of its competitive online multiplayer game mode.

While e-sports may be a long way off from being a significant contributor to the bottom line, it is a great marketing tool for game companies to build a bigger audience for game franchises.