Please ensure Javascript is enabled for purposes of website accessibility
Free Article Join Over 1 Million Premium Members And Get More In-Depth Stock Guidance and Research
By Jim Crumly - Mar 6, 2017 at 9:21AM

Management has been presenting an upbeat picture for the company's prospects...with good reason.

In reporting results for the final quarter of 2016, the management of mid-cap biotech Alkermes plc ( ALKS -0.32% ) made its case that 2017 will bring plenty of good news to investors. With accelerating sales and several drugs in the pipeline approaching commercial status, Alkermes could be on the brink of a major breakout. Here is what management wants investors to focus on. 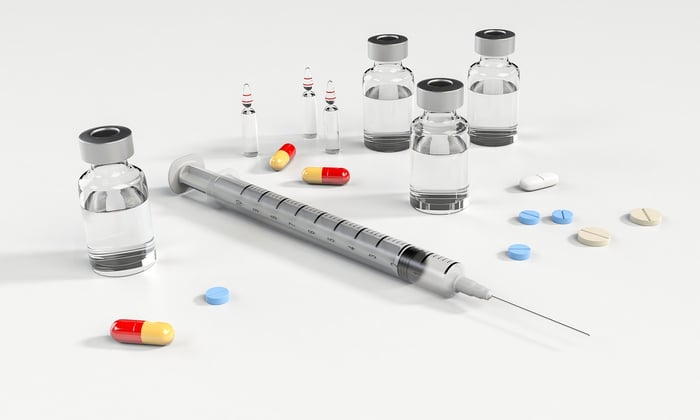 1. The outlook for currently shipping products is getting rosier

Alkermes' Vivitrol and Aristada helped fuel a 19% increase in revenue for 2016. Sales of the two wholly-owned drugs, which management expects to exceed $2 billion in the 2020's, are growing consistently.

Vivitrol is a treatment for addiction to alcohol and opioids that has been on the market for years but is just taking off now after the company realized that selling the drug meant building a unique ecosystem involving the legal system and addiction recovery programs. Production capacity for the drug will support sales of around $600 million annually, but in the Q4 conference call management revealed internal discussions to boost capacity to a range of $1 billion to $1.5 billion beyond 2019.

Aristada is a long-lasting, injectable anti-psychotic that is in its very early stages of growth. Compliance with a treatment regimen can be a big challenge for the drug's target patients, so the Aristada dosing options of once every month or six weeks provide a solid clinical benefit. The market for these drugs in the U.S. is $2 billion and growing at 23%, creating a strong tailwind for the product. Alkermes expects sales in 2017 to double those of 2016, and the company is developing a version that extends the dosing out to two months.

2. The NDA filing for anti-depression drug ALKS 5461 is just ahead

ALKS 5461 is a drug to treat major depressive disorder in patients that don't respond to first line treatments, a population of 7.3 million in the U.S. Investors gave up on it in 2016 after disappointing results from a phase 3 trial, but the company believes it will get FDA approval based on the overall results from over 20 studies involving more than 1,500 patients. The company had a successful meeting with the FDA in February, expects to have the pre-NDA meeting in Q2, and the NDA submission in the second half of the year.

3. The upcoming multiple sclerosis drug should compete well against the $3 billion incumbent

There is a lot of competitive activity in the multiple sclerosis space, but Alkermes' pipeline drug, ALKS 8700, leverages a drug that already sells at a $3 billion rate in the U.S., Tecfidera from Biogen. The Alkermes version metabolizes to the same active molecule that Tecfidera does, with the improvement of better GI tolerability. Alkermes expects to be able to file the NDA in 2018.

4. Pivotal efficacy and metabolic studies for its schizophrenia drug are reading out in 2017

ALKS 3831 addresses the major drawback of the number three schizophrenia drug, olanzapine, by mitigating the side effect of weight gain. 64% of patients on olanzapine experience a weight gain of at least 7% of their body weight, and 12% of patients add a hefty 25% to their body weight. Phase 2 studies of ALKS 3831 showed a significant reduction of weight gain while delivering antipsychotic efficacy equivalent to olanzapine. Investors will see data from a human metabolic study in mid-2017, a pivotal four-week efficacy study by year end, and a six-week weight gain study in mid-2018.

Alkermes has reached a point where sales of its drug portfolio are accelerating and the company expects to break even on a non-GAAP basis this year for the first time. With important data on a pipeline of at least three potential blockbusters reading out in the next few quarters and a stock that is 30% below its peak in late 2015, investors looking for opportunities in the biotech space should take a look at Alkermes.

Why Shares of Alkermes Rose 18% Last Month
Want to Make Money in Biotech? Do This First