Shares of Lumentum Holdings (NASDAQ:LITE) were surging last month after the fiber-optic cable producer delivered strong profit growth in its second-quarter earnings report. As you can see from the chart below, the stock surged on the report, although shares fell off toward the end of the month. 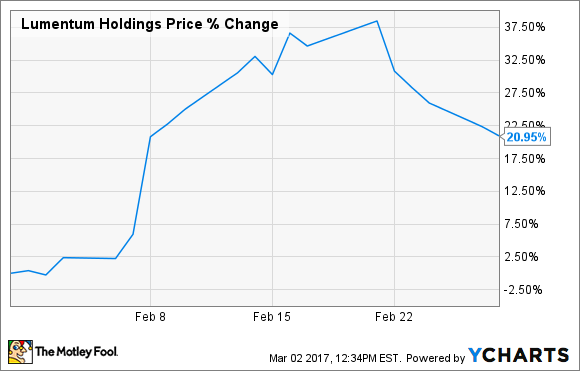 Lumentum shares jumped 14% on February 8 after the company beat earnings estimates in its second-quarter report. Adjusted earnings increased from $0.31 the year before to $0.57, which beat estimates at $0.51. Management credited "strong growth in new product revenue, particularly 100G Datacom, which was up 500% from the year before." Operating margin also reached a record high of 14.7%.

Excitement seemed to be building for Lumentum's role in 3-D sensing technology, as revenue from that segment is expected to grow in the second half of the year.

Overall revenue also increased 21% to $265 million, though that slightly missed expectations at $265.7 million.

Looking ahead, the company forecast earnings per share of $0.46-$0.54 for the current quarter, ahead of the analyst consensus at the time at $0.47, though revenue guidance of $250-$265 million was underwhelming.

On March 2, the company announced an offering of $350 million of convertible notes, which the company said will fund manufacturing capacity expansion and working capital.

Fiber-optic stocks like Lumentum have been big winners in recent years, but the stock should remain volatile, especially if gains continue to be driven by hopes for 3-D sensing technology.