We're getting near the end for hhgregg (NYSE:HGGGQ). The consumer electronics retailer announced last week that it would be shutting down 88 stores and 3 distribution centers. There's speculation that the chain may file for bankruptcy this week.

It's only natural for us -- as investors -- to approach one company's tragedy as a money-making opportunity somewhere else. If one consumer electronics retailer buckles, doesn't that mean that surviving rivals will benefit? Shouldn't Best Buy (NYSE:BBY), as the niche leader, cash in on hhgregg's demise? Well, it's never that easy. Let's look at a few of the reasons why Best Buy may not be able to make the most of hhgregg closing dozens of stores. 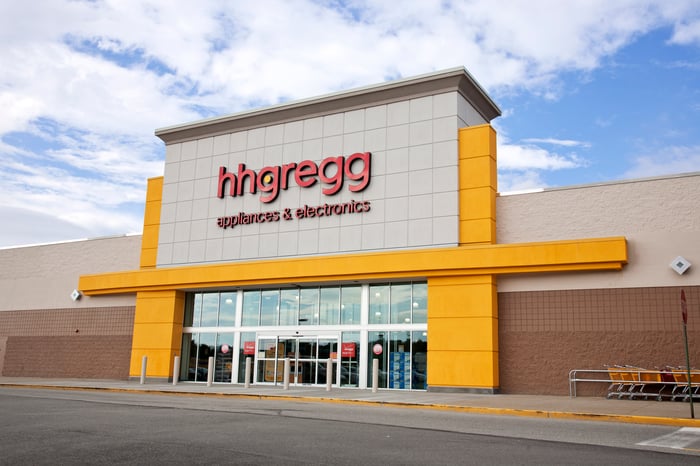 1. Liquidation sales are only good for shoppers

Circuit City announced that it would close its 567 remaining stores in early January 2009. The sale would conclude in March. With Circuit City folding, and its inventory not being replenished, this should've been a dinner bell for Best Buy -- but it wasn't.

Comps at Best Buy for its fiscal quarter that ended on Feb. 28, 2009 fell 4.9%. Comps for the May quarter -- including the final month of Circuit City's liquidation -- plunged 6.2%. That was certainly a dark time for the economy, but Circuit City selling TVs, PCs, and media items at steep markdowns made it less compelling to check out a competitor.

If you're looking at a big-ticket item and there's an hhgregg store closing down near you, you're probably going to go there first to see if you can score a deal. Customer support will be out the window after the purchase, but liquidation prices are low for a reason.

2. Closures are a symptom of Best Buy's ailment, too

Best Buy is holding up surprisingly well in rough seas. Customers are flocking to cheaper online options. The CDs, DVDs, and video games that used to draw repeat low-ticket traffic has whittled away in a digital revolution where folks are downloading and streaming entertainment.

The death of Circuit City didn't validate Best Buy, and the likely demise of hhgregg won't do that, either. Big-box retailers of consumer electronics and appliances are endangered. Every RadioShack that closes doesn't send customers to Best Buy, just as every Hollywood Video store that closed down didn't send video buffs to Blockbuster. The general trend is shifting away from physical retail, and Best Buy can't be the solution when it's still part of the problem.

3.  Big-box superstores are a lose-lose situation

After the locals are done picking the last of the deals off of hhgregg's carcass they will continue to have an appetite for finding great prices on consumer electronics. Best Buy has beefed up its online presence, and e-commerce accounted for 18.6% of its domestic revenue during the holiday quarter. However, the migration to BestBuy.com has its consequences. Those shoppers aren't coming back. They will continue to smoke out the best deals possible, and more often than not, they won't be at Best Buy.

The challenge for Best Buy and BestBuy.com is that it needs to be more competitive on pricing at BestBuy.com, but it can't afford to undersell Best Buy. Unlike pure online retailers that lack the showroom overhead, Best Buy has to make back the costs of staffing pretty stores by beefing up its prices. The end of Circuit City and the fade at hhgregg will inevitably be the Ghost of Christmas Future for Best Buy.

Best Buy shareholders shouldn't cheer the demise of hhgregg. If they look real hard, they may see their own chain in the reflection.