Please ensure Javascript is enabled for purposes of website accessibility
Log In Help Join The Motley Fool
Free Article Join Over 1 Million Premium Members And Get More In-Depth Stock Guidance and Research
By Maxx Chatsko - Mar 7, 2017 at 10:41AM

Collaboration-software leader Atlassian Corporation is growing at an incredible pace -- and generating tons of cash in the process.

One knock against many high-growth software companies is that they often put growth before profits. However, investors have become complacent in this approach to business. User growth is king, and all other metrics are secondary. Without an enormous user base, the thinking goes, the potential for future profits doesn't exist.

There's a precedent for this rationale. After all, investors can simply point to Facebook or Salesforce.com to show that it's the correct approach for finding huge gains. While tech and software companies aren't my core area of expertise, I've always had a problem with this argument. Namely, it can easily be chalked up to survivorship bias, where the high rate of failure among tech start-ups isn't properly factored into the risk profile for this business model because the winners write history.

But if sacrificing profits for growth is par for the course, then investors need to make sure they mitigate those risks with strength in other areas -- and I think I've found a great opportunity: Atlassian Corporation (TEAM -1.44%). Why? The company is growing its user base at an impressive clip and generates a strong (and growing) cash flow. Here's why it's the one stock I'd buy right now in the industry. 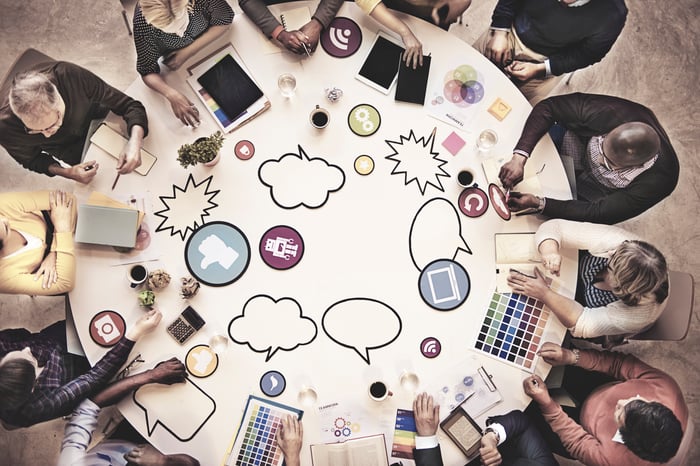 A cash cow and growth machine

The collaboration-software leader provides tools that allow teams to work together more efficiently. In addition to software programming-management solutions and IT service capabilities, that includes three core tools:

I've actually used JIRA before, and it certainly made it easier to tackle projects and hold team members accountable. That small business I completed work for was just one of 68,000 customers -- not to be confused with users -- spread across the globe, including the likes of NASA and Coca-Cola, that use tools provided by Atlassian Corporation. An impressive and growing lineup of customers has made growth easy to come by.

There are quite a few awesome growth statistics for investors to drool over, but the most important, in my opinion, is cash generation. Atlassian Corporation generated $129 million in cash from operating activities in fiscal 2016, which marked a 32% increase from the prior year. Operating cash flow has increased every year since 2013 and has unilaterally supported a growing cash pile without much help from outside financing -- aside, of course, from the IPO bounty.

While Atlassian Corporation has historically squeaked out positive earnings per share (EPS) in the last several years, management has guided for a net loss of $0.30 per share in fiscal 2017. That's not exactly ideal, but the rest of guidance more than makes up for that drawback. Importantly, the cash machine will continue getting stronger.

The latest guidance for revenue and cash generation is significantly higher than the initial expectations of management. That's good, especially considering that Atlassian Corporation just acquired task-tracking competitor Trello for $425 million, comprised of $360 million in cash and the remainder in restricted stock. That will cut the company's cash pile by 40%.

I'm not exactly a big fan of the acquisition, although previous purchases have been successfully integrated into the Atlassian universe. That said, Trello will contribute just $4 million in revenue during fiscal 2017, and will either not have any impact, or a slightly beneficial impact, on income in 2018.

At face value, it appears to be an expensive acquisition, although it has the immediate benefit of swiping away a sizable competitor. In the long run, Trello's 19 million users could provide another source of higher-margin customers if an integration proves successful. I'll give the company the benefit of the doubt for now, which is a lot easier to do when the business is self-sufficient.

The thing that impresses me the most -- and what should stand out to investors -- is that Atlassian Corporation is still in the early stages of its growth trajectory. Not only does it provide the opportunity to piggyback on well above average growth, but it continues to nurture an incredibly solid operating cash flow.

If the company can continue to keep expenses under control and doesn't become complacent with swelling operating losses, then it should easily reward investors with long-term gains. That's why it's the one tech stock I'd buy right now.