The company has been hemorrhaging money for several years and its balance sheet is out of control, but management thinks it has the ability to fix its woes.

If you were to look at Calumet Specialty Products Partners' (CLMT -4.00%) most recent earnings results, you would assume that the new management team has made little to no progress on turning the company around. If you were to ask management, though, you would get a completely different story. Simply put, the critical changes it needed to make haven't quite shown up in its earnings results yet.

Here's a quick snapshot of what management at Calumet is thinking based on several quotes from the company's most recent earnings conference call. These quotes help to show some of the things that aren't in the income statement and what may eventually prove to be the turnaround of Calumet's business. 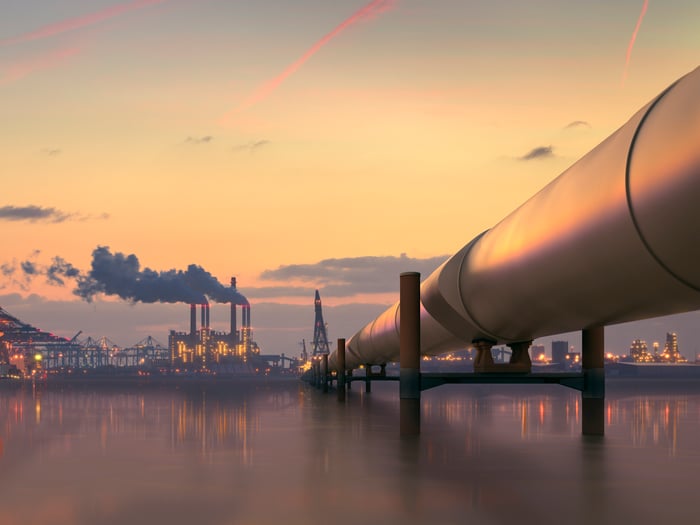 Starting off on the right foot

Calumet CEO Timothy Go has been on the job for a little over a year and a half. When he took over, the company had some interesting assets, but was a mess both operationally and financially speaking. His time in office has been a Herculean effort to change the company's culture and turn the company into a profitable venture again. While the company certainly isn't there yet on the profit side of things, Go did explain that the initial steps to get there have been made:

In 2016, we set the foundation for our recovery and we believe we are turning the corner. Our sales volumes are up and our inventory is down. SG&A expense is down as we eliminated waste, while simultaneously increasing our efficiencies in all facets of the business.

We've changed our culture and significantly upgraded our leadership team. And the bottom line is, our strategy is working and we're ready to enter the second phase of our strategic plan as we look to drive several new growth opportunities in 2017.

An aspect that has made Calumet unprofitable for so long was that its assets haven't been optimized or ran at a high rate for various reasons. This makes it close to impossible to turn profits when you are a refiner or petrochemical manufacturer. Margins are notoriously thin and there are high fixed costs at the refinery, so the inability to run at a very high rate pretty much guarantees that the company won't make money from its operations.

It would seem, though, that poor operating metrics are becoming less of an issue for the company under Go. From purely an operations standpoint, this was one of the better years on record for Calumet.

We operated well and we set numerous records across the organization, based on both the hard work of our employees and the collective execution of all of our teams against our strategic plan. Some of these records include: Record annual production; throughput in fuels products sales volume, driven primarily by the Great Falls refinery expansion that we completed in February of 2016. We had record sales volumes for diesel, asphalt, esters, lubricating oils and branded and packaged products. And we saw record profit contribution from several of our Specialty business lines, like our branded and packaged products, which saw strong growth throughout 2016.

Keep in mind, too, that these records for production include the fact that it sold its interest in a diesel refinery in North Dakota in the second half of the year. Even without this asset in tow, Calumet's operations still produced record results.

Complete reshuffling at the top

When a new CEO comes in, it's pretty normal for them to bring in a new team with them. Go is no different. Over the past 18 months, he has more or less done a complete reshuffling of the upper crust at the company. As part of his opening statement, he gave a shout out to all the new people he has brought on board for the following positions:

Considering the disarray that Calumet was in before Go arrived, it would seem that an entire corporate board shakeup was needed. Now it's up to this team to put the several years of experience that Go highlighted as this new team's strengths to work turning this company around.

One of the first things that Go did when he took the reigns of the company back in the middle of 2015 was to look at how the company could cut some of its operational expenses. As was mentioned on the call, much of the company's systems and back-office functions weren't completely integrated; a hangover from the Calumet's previous acquisition binge without prudent cost management.

On the call, Go was able to highlight some of the effiencies he and his team were able to wring out of the business last year and the steps it can make to improve again in 2017

[T]argeted cost-reductions delivered $54 million of self-help in 2016. We are creating the culture of cost discipline. Our SG&A was down 21% in 2016, and we saw a 70% reduction in our capital spending as we completed previous growth projects and placed them in service. In fact, our capital spending was the lowest it's been since 2012. As we look toward 2017, we remain fully committed to eliminating further waste. Along those lines, we've already implemented new initiatives earlier this year to further reduce headcount and control costs, which we expect will drive an additional $10 million to $20 million in annual SG&A savings by the end of 2017.

For a rather small company, Calumet has a pretty diverse set of assets from specialty petroleum products to oilfield services. This diversity has always been a little questionable, especially when some of those business segments continue to struggle with profitability. The assumption among many analysts was that Calumet would sell some of these assets to raise some cash and to focus on its core suite of specialty products. According to Go, though, management isn't rushing to sell these assets right now.

Go did mention that longer term, asset sales are very much on the table. Those will come after management has squeezed as many efficiences out of it as possible, though, to determine its longer term profitability and to make it a more attractive asset to sell.

It may not look like much on paper, but these are steps in the right direction. It is still going to take a lot more to get this company back on the track it needs to fufill the value proposition Calumet is supposed to be: a master limited partnership that returns high rates of cash flow back to its investors. If the company can meet these stated goals for 2017 and start to lower its debt load, then we may need to start taking this company seriously again.