Please ensure Javascript is enabled for purposes of website accessibility
Log In Help Join The Motley Fool
Free Article Join Over 1 Million Premium Members And Get More In-Depth Stock Guidance and Research
By Bradley Seth McNew - Mar 8, 2017 at 11:06AM

The company has a point to prove, and yesterday's launch looks like an important step in getting that point across. Here's why the launch of this shoe is something to get excited about.

Nike (NKE -1.02%) could really benefit from proving that it's still an innovative brand, and that it has much more to offer the world than just increasingly expensive, trendy sportswear. The company has picked a formidable goal to try to prove that point, seeking to help a runner break a two-hour marathon, something that would have seemed impossible a few years back.

On Tuesday, the company revealed new shoes that are the ones expected to be worn for what the company is calling Breaking2. Here's a look at the wild new shoes, and why this could be such a big deal for Nike now.

The shoes are officially called "Nike Zoom Vaporfly Elite with Nike ZoomX midsole," a name that looks complicated, but the shoe seems to have plenty of innovation to live up to that high tech-sounding name. Without getting too deep into the technicalities, the design bucks current trends for long-distance racing shoes to be low to the ground, instead adding more "Nike ZoomX" midsole cushioning. The shoes also feature an advanced carbon fiber plate, the company's distinct Flyknit upper, and a heel that flares up at the back for increased aerodynamics. 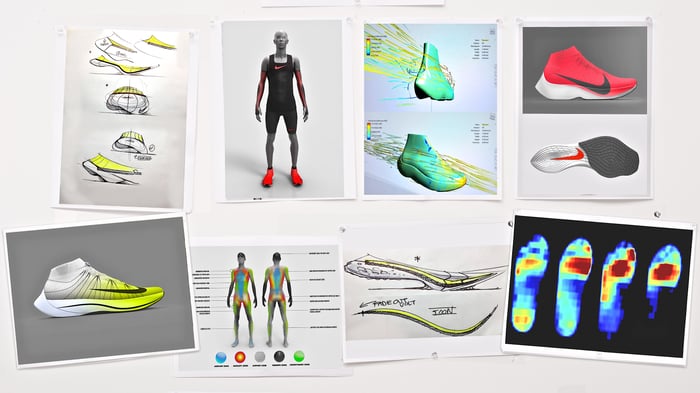 The shoe is still a "concept" shoe and is being individually crafted to the needs of each of the runners. Additionally, Nike is working on the rest of the running wardrobe that will be worn for this project, such as a singlet with advanced ventilation that will be tailored fit to each athlete with body-scanning technology, as well as Nike's Aeroblade tape technology-- featured at the 2016 Summer Olympics -- that uses tiny blades across patches that runners add to their arms and legs to reduce drag.

The team has even been incredibly technical in selecting a track. The runners will use the gear at the Autodromo Nazionale Monza complex near Monza, Italy, which has been selected for its altitude, average temperature, vapor pressure, typical overcast skies, and even air currents. Three runners -- Eliud Kipchoge, who won gold at the 2016 Olympic marathon; Zersenay Tadese, who holds the world record for the half-marathon; and Lelisa Desisa, who has twice won the Boston Marathon -- have been chosen to make the attempt, though a date hasn't been set. Nike has picked a very public way to try and prove that it hasn't gotten away from its innovative roots, but the public chest-beating might be warranted. The company has faced some serious competition from rivals such as a resurging Adidas (ADDYY 0.10%), which is reportedly working on a similar goal, and Under Armour (UAA -5.12%) (UA -2.94%), which has made its own impressive gains with tech-heavy footwear.

Nike suffered in 2016 as analysts questioned its long-term prospects in the face of such fierce competition, and its stock fell around 18% during the year, making it one of the worst-performing large-cap stocks in the market for the year. However, things are starting to turn around as the company fixes its overstuffed inventory challenges and continues to execute in key categories and regions in a way that looks promising for sales and earnings in the coming quarters. Shares of Nike are up 11% so far in 2017.

If Nike finishes this wild marathon challenge, it could help increase sales of the company's performance gear in general as these same kinds of technologies are implemented in more mainstream-looking shoes. The company has already shown that possibility with the rest of the Nike Zoom Vaporfly collection, also announced Tuesday, that will be available in June.

However, much more important is that Nike is even taking on a challenge like this and using it as a chance to plant a flag in the ground -- that Nike's dominance when it comes to innovative performance sports gear is very much intact regardless of what Adidas and Under Armour are doing to chip away at its market share. For that, the launch of these shoes looks like something to get excited about.