Please ensure Javascript is enabled for purposes of website accessibility
Log In Help Join The Motley Fool
Free Article Join Over 1 Million Premium Members And Get More In-Depth Stock Guidance and Research
By Brian Stoffel - Mar 9, 2017 at 11:00AM

In a battle of childhood favorites, one is head and shoulders above the other.

Who doesn't have fond memories of watching their favorite Disney (DIS 3.69%) movies while growing up, or playing with the newest Barbie doll or Hot Wheels car during the summer downtimes? The emotional connection that we form with these brands is powerful; that's why investing in the industry can be so lucrative.

Today, we'll have two well-known names from children's entertainment facing off against one another. In one corner, there's the 800-pound gorilla: Disney. In the other corner, we have the parent company to the aforementioned brands, as well as American Girl dolls and Polly Pocket: Mattel (MAT 4.40%). 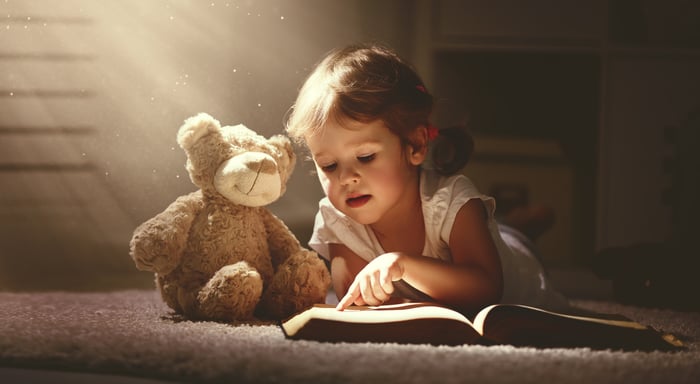 While it's impossible to say with 100% certainty which of these stocks will perform better over the next five years, there are three different ways we can approach the situation. Hopefully by doing so, it will be clear which is the better buy at today's prices.

When it comes to my own investing experience, no factor has been more influential in my overall returns than the sustainable competitive advantages of the underlying companies that I invest in. While profits, cash flow, dividends, and valuation are all important, this has been the lynch pin. Often referred to as a "moat," this represents the special something that makes a company unique -- keeping customers coming back year after year, while the competition is held at bay.

Both of these companies benefit primarily from the strength of their brands.

Disney has a host of divisions within the company: its parks (Disney World, Disney Land, etc.), studio ventures (movies like Star Wars or Zootopia), networks (ABC, The Disney Channel, ESPN), and consumer products (toys). It also has some of the most timeless characters known to the world: Mickey Mouse, Star Wars, The Lion King, Cinderella, Nemo, and many more that I don't have space to list here.

Mattel also benefits from brand strength -- namely in the company's marquee line of Barbie dolls, but also in Hot Wheels, Polly Pocket, and American Girl. There's one huge difference: Disney has remained on the cutting edge of these brands, continually introducing new and popular brands via its studio segment, and it controls large swaths of its distribution. Mattel's brands haven't aged nearly as well, and don't hold the same sway over today's youth that it once did.

The winner here is clear.

Both of these companies provide dividends, which is an obvious benefit to owning shares. But not all cash that comes in should be devoted to shareholders. It's important for companies to keep a sizable cash stash on hand.

That's because every company -- at one point or another -- will face difficult economic times. Those that enter such periods with lots of cash on hand have options: they can outspend rivals to gain market share, buy back stock on the cheap, and even make acquisitions.

Companies that are debt-heavy are in the opposite boat: forced to cut back on spending and potentially lose long-term market share in an effort just to stay solvent.

Here's how Disney and Mattel stack up in terms of financial fortitude, keeping in mind that Disney is valued at twenty times the size of Mattel.

If another economic crisis were to hit, both of these companies would be hurting, but I think it's fair to say that Mattel is more economically fragile.

Data source: Yahoo! Finance, E*Trade. P/E represents figures from non-GAAP earnings. Disney's dividend for the most recent quarter was not included in free cash flow statements because its timing pushed it into Q1 of 2017. It was assumed to be included in Q4 for this chart's purposes.

In this category, it's much more difficult to declare a winner. Mattel is cheaper on most metrics, notably trading at a 45% discount to Disney when considering the potential for future growth (PEG Ratio). It also offers a very tempting 6% dividend yield.

But that payout isn't so safe: the company had to use 156% of its free cash flow to pay its dividend. That is not a recipe for sustainability. Taking that into consideration, and factoring in that Disney is only marginally more expensive on a P/E and P/FCF basis, I'm calling this one a tie.

So there you have it, Disney is pretty clearly the better buy at today's prices. That's not too surprising, given the strength of the company's brands, the popularity of its parks, and the potential for growth continually provided by the company's studio division.