Please ensure Javascript is enabled for purposes of website accessibility
Log In Help Join The Motley Fool
Free Article Join Over 1 Million Premium Members And Get More In-Depth Stock Guidance and Research
By Rick Munarriz - Updated Mar 9, 2017 at 8:15AM

There's going to be a whole lot of Pandora -- The World of Avatar on Disney's (DIS 1.84%) ABC. The media giant is promoting the Avatar-themed expansion that opens at Disney's Animal Kingdom on May 27 with a few content hits across ABC's programming today.

Good Morning America is kicking things off with a segment detailing Avatar Flight of Passage, Disney World's upcoming thrill ride where guests will simulate a ride on a flying banshee from the original Avatar movie.

The View -- already broadcasting from Disney World this week -- will have Avatar creator and director James Cameron take Whoopi Goldberg on a tour of the new land. Cameron's tour will conclude with a glimpse at the Na'vi River Journey, the tame yet high-tech boat ride through the lush bioluminescent foliage that makes up the second of the two new rides opening in two months.

The Chew will then cover the culinary delicacies that will be served at the new land's two restaurants and kiosks. The feature will take a look at Lumpia, Pandora's signature snack.

We then whisk all the way to the end of the ABC programming day, when Nightline will have an in-depth look at Avatar -- The World of Pandora. 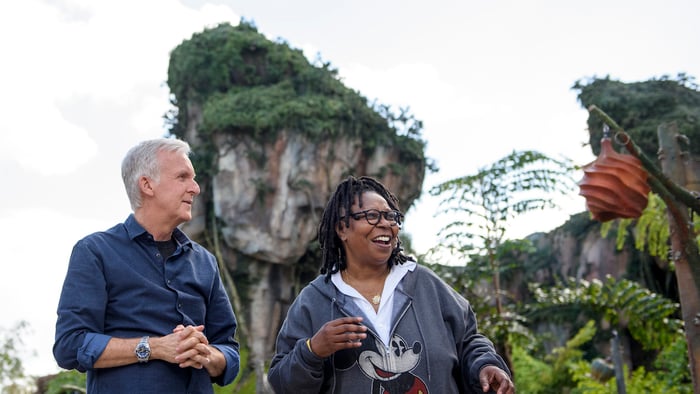 Media is the message

It may seem odd for ABC to promote a theme-park land that won't open for another two months, but keep in mind that Disney owns ABC. This is a visual advertorial, and a brilliant strategy at that. The new land doesn't open until May, but it's also an expansion based on a franchise that's lost its relevance since its box-office success in 2009. There's at least one Avatar and two Pandoras that most consumers think of when they hear either name.

A sequel isn't rolling out until the end of next year at the earliest, so it's Disney that has to do a lot of heavy lifting to get folks excited about what some are dismissively calling "Avatar Land." Disney has created a VisitPandora.com website and a related Twitter feed, but with a little more than 6,000 followers on that social-media push, it needs to strike big on ABC and its other media properties.

There's a lot riding on the success of this expansion at Disney World's third busiest theme park. Its nearest rival keeps closing the attendance gap, and Disney World itself has experienced year-over-year declines in attendance in three of the past four quarters. This is Disney World's most aggressive expansion since late 2012. It can't get this wrong, and that's why it's making sure it's reaching four different audiences tuning in to ABC today -- just in time for families to shore up their summer vacation plans. I hear Pandora is nice this time of year.