There wasn't anything out of the ordinary in Fairmount Santrol's fourth-quarter report. Revenue was $140.5 million, which was up 4% both sequentially and year over year. Meanwhile, the company's net loss of $19.9 million, or $0.09 per share, matched analysts' expectations. However, that apparently wasn't good enough for the market, which seemed to have its hopes set on the company's rising volumes translating into improving profitability. 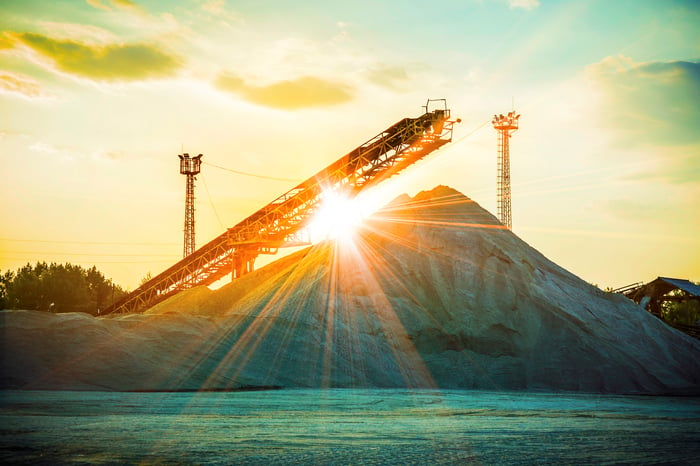 The problem with that expectation is that it was far from realistic, because all of Fairmount Santrol's peers reported the very same thing. Volumes were up, but profits were under pressure because pricing remains muted. In fact, just a few weeks ago, U.S. Silica reported a narrower loss than expected due to a 34% increase in volumes. However, the entire sector sold off on the news because the market was expecting that the company's growing volumes would cause pricing to increase, leading to even higher profits. But that's not possible at the moment, because producers are facing several headwinds including the roll-off of higher priced contracts, rising costs from the restart of idled facilities, and intense competition.

Furthermore, rivals were clear that pricing didn't begin to improve until the end of last quarter; that's when Emerge Energy Services noted that "small price increases started to take effect." The company would not feel the full impact of rising prices until the first quarter, assuming frack-sand demand remained robust.

Therein lies the other concern, which is that frack-sand demand might start to decline now that oil prices have turned lower. In fact, crude recently settled under $50 per barrel, which is its lowest price since November. That $50 a barrel level is a key psychological mark for the industry, because many shale wells need crude over $50 to earn lucrative drilling returns. However, with crude sliding below that level, it could cause drillers to rethink their growth strategies, which might mute demand for frack sand.

On the one hand, today's sell-off among frack sand producers is a bit of a head-scratcher because there was nothing unexpected in Fairmount Santrol's results. Instead, the market seemed to have unrealistic expectations that did not materialize.

However, on the other hand, the recent sell-off in the oil market is a reason for caution because it could cause volumes to fall, which would likely reverse the price increases that started to emerge in recent weeks. That's why I wouldn't view today's sell-off as a buying opportunity: If crude continues to slide, it will likely continue to take frack-sand stocks down with it. That would probably cause an even longer delay before higher volumes translate into rising prices, which are needed to drive profitability.