Shares of Fairmount Santrol Holdings (NYSE: FMSA) are down 15% as of 11:15 a.m. EST today after the company released fourth-quarter earnings. Fairmount's earnings were similar to those of almost every other frac sand producer this past quarter: big gains in volumes but little change to the bottom line. 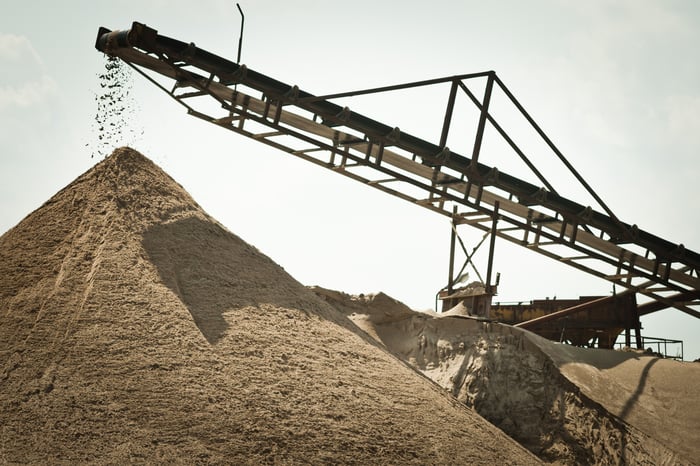 The company also noted that costs of goods sold were higher in the prior quarter, but that has been a pretty common theme among Fairmount's peers, too, as all of these companies restart idle sand mines to meet rapid growth in demand. As those mines get back to full capacity, the fixed costs for running mines will be spread out among a larger revenue base, which will likely lead to higher margins.

Based on the performance of Fairmount's peers, it's hard to see why this earnings report came as a surprise. The results were pretty much par for the course in the frac sand industry today, and there was plenty of heads-up from other producers that we were likely going to see higher volumes with stagnant sales prices and continued losses at the bottom line.

In the longer term, though, things are looking up for the company. It used an equity issuance in the fourth quarter to pay down some debt and clean up its balance sheet, it has plenty of room to add production capacity by starting up idle mines, and frac sand demand per well is growing so fast that the total number of wells drilled doesn't need to come anywhere near pre-crash levels for the overall demand for sand to get back to strong levels. Fairmount still has some work to do, but getting rid of shares after this earnings report seems a bit shortsighted.