Restaurant chains have a new idea to tackle the "restaurant recession" that's seen customer traffic across the industry decline in recent quarters.

In the last few months, a number of chains have announced initiatives in delivery and mobile ordering, hoping to meet customers where they are as e-commerce has reduced the number of people visiting malls and shopping centers -- foot traffic that restaurants rely on. Eyeing the successes that companies like Domino's Pizza (NYSE:DPZ), Papa John's (NASDAQ:PZZA), and Starbucks (NASDAQ:SBUX) have had, their competitors have decided that they want a piece of the action. 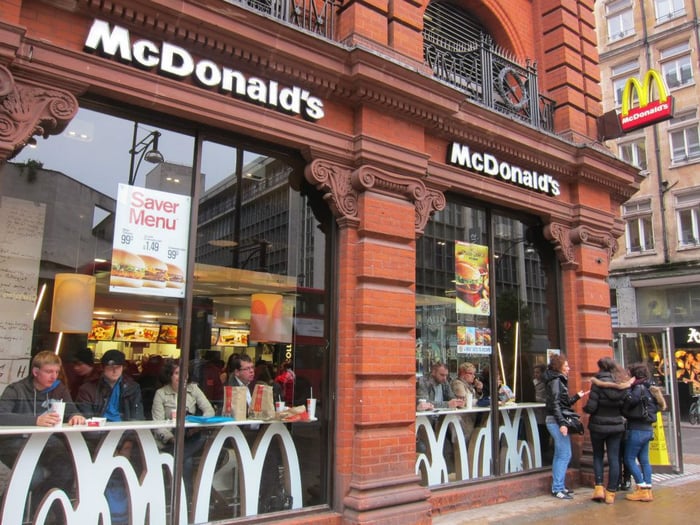 Among the restaurant chains that announced such moves recently are BJ's Restaurants (NASDAQ:BJRI), Brinker-owned(NYSE:EAT) Chili's, and Shake Shack (NYSE:SHAK), but the biggest move came from McDonald's (NYSE:MCD), which announced it would roll out its own mobile order-and-pay program, similar to the one implemented by Starbucks. As the country's biggest restaurant chain by sales, McDonald's decision is likely to push the industry further in that direction.

In a recent press release, McDonald's said it would focus on delivery, calling its rapid increase "one of the most significant disruptions in the restaurant business today."

Management sees delivery as an important opportunity because 75% of the population in its five biggest markets (U.S., France, the U.K., Germany and Canada) lives within three miles of a McDonald's. As an example, the company said that its China delivery business tripled since it launched in 2008, and grew by 30% in 2016 alone. Here are a few reasons why restaurant delivery suddenly has gotten so popular.

1. The rise of third-party apps

Technology has made delivery even easier for restaurants. They no longer have to rely on taking orders over the phone, and, even better, they can simply outsource the delivery to third-party providers. In recent years, a number of such startups and entrenched businesses have taken a run at this opportunity, including Postmates, UberEats, Instacart, Amazon, and others.

GrubHub (NYSE:GRUB), which owns a number of delivery apps, including Seamless, has built a steady business around the concept, with $50 million in profits in the last year and revenue growth around 40%. McDonald's tested home delivery in the 1990s, but the concept never really took off, and the chain pulled the plug. However, with today's customers conditioned to whip out their smartphones at the impulse to buy something, it will likely do better this time around.

These days, consumers can get almost anything they want without leaving the home. Amazon sells millions of items you used to have to visit stores to buy. Over-the-top online video streaming services obviated the need to hit the video store for nightly entertainment, and even meal-kit delivery services like Blue Apron and Plated have arrived to complement traditional restaurant delivery.

The success of pizza chains like Domino's and Papa John's rests in no small part due to consumers' desire for convenience and the companies' ability to harness technology to meet those customers where they are. Similarly, Starbucks' Mobile Order & Pay program has been so popular that it has caused bottlenecks in many of the coffee chain's locations.

Other restaurant chains have taken notice. At a time when retail traffic is declining, and consumer expectations for convenience have increased, offering delivery through a mobile app is increasingly becoming table stakes in the industry.

3. Necessity is the mother of invention

Restaurant traffic has been declining for more than a year, and it's not clear why. There seem to be a number of contributing factors, though. Food deflation has meant that prices have fallen at grocery stores, which are more sensitive to commodity fluctuations than restaurants. In response to that change, consumers may be choosing the local supermarket more often over picking up some fast food.

Restaurant chains have also been expanding rapidly; it's worth noting that overall restaurant and bar sales are increasing faster than retail sales. However their traffic numbers, which are based on comparable-store figures, continue to decline.

Finally, the secular decline in retail traffic that malls and department stores are seeing may be starting to have an effect on restaurants.

Many of the chains that have rolled out delivery have seen traffic fall in recent months. While delivery only makes up a small percentage of overall restaurant sales, adding it may be enough to fill in the revenue gaps for these chains.