After years of hard work, Kinder Morgan (NYSE:KMI) finally won approval to move forward with its controversial Trans Mountain Pipeline expansion project last fall. However, getting the green light from the government of Canada was just one of the many steps needed before the company starts construction on that project. One of the crucial remaining steps was to complete a cost estimate review to ensure that the project was still economically viable.

The company announced the completion of that critical step this week. While the price tag of the project did move higher, which caused some shippers to back away from supporting it due to an associated increase in tolls, an overwhelming majority of shippers remain committed to the project. Because of that, the pipeline expansion still looks excellent from an economic standpoint for the company. One result of the lengthy regulatory process was that the company would need to make changes to the scope of the project. Overall, the National Energy Board added 157 conditions and plan changes such as a thicker pipe wall, additional drilled crossings in environmentally sensitive areas, and the Burnaby Mountain tunnel. Those extra costs pushed the project's final cost estimate to 7.4 billion Canadian dollars ($5.5 billion), up from its most recent estimate of CA$6.8 billion.

To offset the added costs, the company increased the tolls on the project to ensure that it will earn a high enough economic return on that investment. Because of that increase, shippers had the option to keep their volume commitments or turn them back in and pay for their share of the development costs thus far. Shippers, however, turned back only 22,000 barrels per day of the 708,000 barrels per day of capacity they committed to in 2012. This means 97% of the available volumes remain fully committed. The company is now openly marketing that last 3%, which it shouldn't have any problem filling.

Given the updated price tag and tolls, an analyst at RBC Capital Markets believes that the project will earn a return of 6.5 times enterprise value to EBITDA (earnings before interest, taxes, depreciation, and amortization), which is higher than expectations. In fact, that multiple is slightly better than the average of the company's high-graded backlog, which stood at 6.7 times EV/EBITDA earlier this year, an improvement from 7.4 times at the beginning of 2016 after the company jettisoned low-return projects to improve returns. 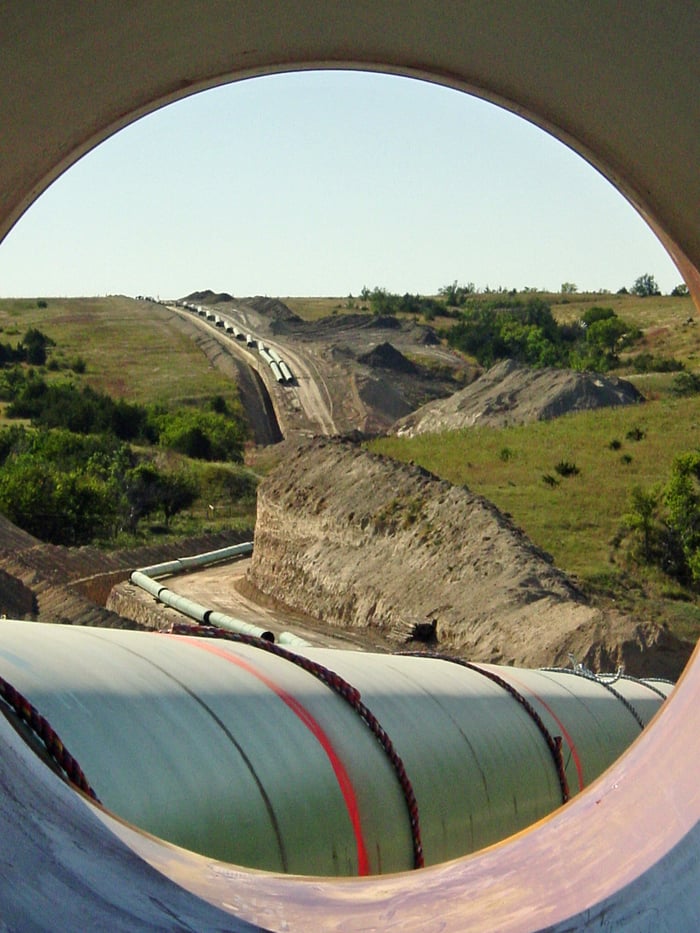 What's the next step?

With the final costs nailed down, Kinder Morgan has the economic incentive and shipper commitments to move forward with the project, which it hopes to start constructing later this year. The company's next step is to find the right financing for the project, which is a process that's already well underway. The company is running a dual-track process for funding, including exploring an IPO, as well as looking for joint venture partners to finance a portion of the project.

According to a report by Reuters last month, the company is looking at a variety of alternatives as it seeks the best option for all stakeholders. If it goes the IPO route, the company would probably look to raise 20% to 40% of the targeted budget, which could be as much as CA$3 billion given the recently increased cost estimate. That would make it one of the biggest IPOs in Canadian history. Kinder Morgan also has a number of options in how to structure that company, including spinning off just its Trans Mountain Pipeline or forming an entity around its entire Canadian asset base, which also includes terminal assets in Alberta.

Meanwhile, if the company went the joint venture route, it could seek to sell up to 50% of the project to pension or sovereign wealth funds. This strategy is one the company has used in the past, with it recently securing private equity joint venture partners for two large infrastructure projects. What the company likes about these ventures is that the partners paid it an up-front fee to both reimburse a portion of capital expenditures spent to date, as well as an additional amount to recognize the value Kinder Morgan created on the project. That's in addition to agreeing to finance a portion of the project's capex through completion.

Kinder Morgan could also look for a funding partner among other Canadian energy infrastructure companies like Enbridge (NYSE:ENB) or TransCanada (NYSE:TRP). While both companies currently have no shortage of projects to finance, both have been aggressively adding to their backlog over the past year via acquisitions. Enbridge would make the most sense of the two. While it won approval to move forward with the Line 3 Replacement, the company's Northern Gateway project was rejected by the Canadian government. That pipeline would have competed with the Trans Mountain Pipeline to move oil to the West Coast. Because of that, the company might be interested in joining Kinder Morgan's project. Meanwhile, TransCanada currently has two export pipelines in limbo, Keystone XL and Energy East. However, the company did recently resubmit for approval to build Keystone XL, which makes it less likely that it would be interested in joining Kinder Morgan.

Once financing is in place, Kinder Morgan will be able to make a final investment decision on the project. If all goes according to plan, the company should be able to begin construction this September and complete it by December of 2019. The project's lucrative economics suggest the company's cash flow should move meaningfully higher starting in 2020.