Shares of Popeyes Louisiana Kitchen Inc. (NASDAQ:PLKI) skyrocketed 25% in the month of February, according to data provided by S&P Global Market Intelligence, after the chickencentric fast-food chain announced it will be acquired by Burger King and Tim Hortons parent company, Restaurant Brands International (NYSE:QSR).

Popeyes' climb last month actually came in two chunks. First, shares briefly spiked as much as 14% on February 13, 2017, after Reuters reported that Restaurant Brands International had approached the smaller company about striking a deal. But Popeyes stock gave up most of those gains as the market digested the caveat from Reuters' sources that the two companies had yet to agree on a price, as well as the fact "there [was] no certainty that negotiations [would] continue." 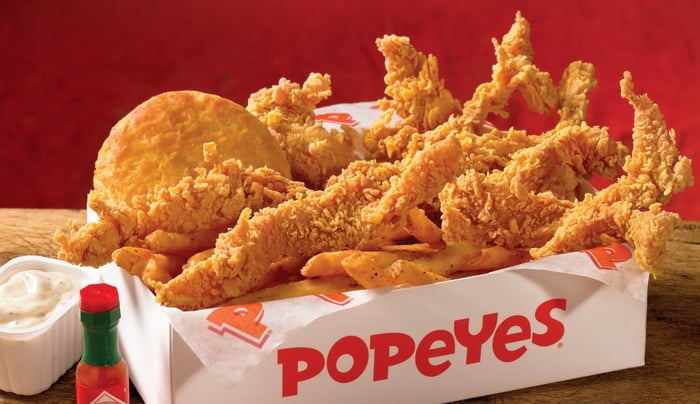 Just over a week later, however, Popeyes stock popped more than 19% as the acquisition was formally announced. When all was said and done, Restaurant Brands International had agreed to pay $79.00 per share in cash for Popeyes, or roughly $1.8 billion, representing a healthy premium of 27% over Popeyes' unaffected 30-day average trading price.

Let it suffice to say, then, that Restaurant Brands International is gobbling up a promising brand capable of generating growth both organically and through steady location expansion.

As for Popeyes investors, note the acquisition is slated to close early next month. So with shares now trading just pennies below the agreed acquisition price -- and unless waiting longer to sell would result in more favorable long-term capital gains tax treatment -- I think Popeyes shareholders would be wise to take their profits and put them to work in another compelling stock.