Tesla (NASDAQ:TSLA) is, arguably, the quintessential story stock. I know, I know...that's not exactly a revelation at this point. Elon Musk set out to create a world powered by renewable energy and filled with electric vehicles, told us about how great it would be, made it sexy, and now we can't get enough of the vision. But it has its drawbacks -- such as having an impossible-to-justify valuation.

When confronted with Tesla's ridiculous valuation, bullish investors counter that there's no comparison to what Musk is building with the brand. That's true, but I find the argument to be dangerous, not because I don't appreciate what the company is attempting to accomplish, but because analysts and investors aren't appreciating that the company could fail to accomplish what it's attempting.

A gaudy (and simply ridiculous) valuation is the simple reason I won't buy Tesla, and I think other investors may feel the same way.

The just-released full-year 2016 earnings showed impressive year-over-year growth and promised even more in the first-half of 2017. The Model 3 launch in July and subsequent production ramp-up in the fourth quarter of this year have the potential to really push growth to the next level.

Throw in a simultaneous ramp-up of energy storage products from Gigafactory 1, and it's easy to see why investors are excited. But is all of this worth $40 billion of excitement?

Tesla is now worth nearly as much as Ford Motor Company and General Motors -- established automakers that sell more cars in less than one month than the company did in all of 2016. 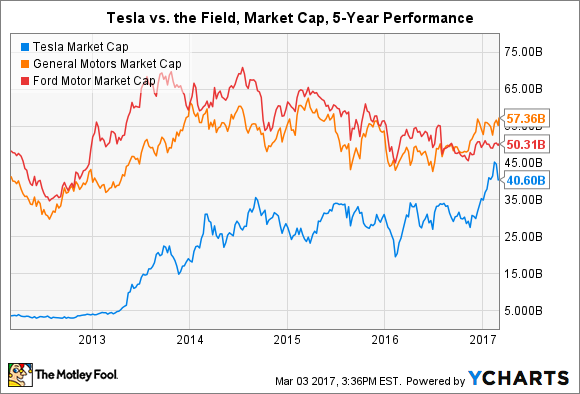 For instance, the Chevy Bolt, which has a starting price of $37,495 and offers a 238-mile range, promises to give the Model 3 a run for its money. It became available in two states last December and will increase its footprint this year.

Meanwhile, Ford has an "electrification" strategy that will gradually transition the automaker to hybrid and fully electric vehicles over the next decade. The Ford Fusion Energi was the fourth best-selling electric vehicle in the United States through the first 10 months of last year.

In addition to direct competition, electric vehicles sold by companies other than Tesla will eat away at the company's revenue stream provided by Zero Emission Vehicle (ZEV) credits, which are sold to comply with regulatory obligations in certain states. In 2016, these accounted for $302 million in revenue. It may not seem like much, but given the revenue is essentially cost free, ZEV credit sales accounted for 19% of the company's gross profit last year.

What about non-transportation growth?

What it didn't show is that the company appears to be abandoning plans to manufacture Silveo modules, and will instead purchase "custom made modules" from Panasonic, according to an agreement signed in December 2016. That could result in a significant writedown of the acquisition costs and technology development.

The update letter also doesn't mention that Tesla's energy-storage ambitions aren't realistic from a technical standpoint. In addition to thermodynamic obstacles from specific lithium-ion chemistries, researchers who have crunched all of the detailed numbers don't think there will be much -- if any -- battery cost-reduction benefit from building larger battery factories. That should make investors a little uncomfortable, especially considering cost reductions were a crucial argument defending billions of dollars in expenses for building Gigafactory 1.

Why Tesla isn't for me

Tesla's reliance on storytelling is offputting to me, doubly so when it results in a $40 billion market cap that is impossible to really justify. Investors continue to overvalue the potential of imaginative solar roofs and uneconomical residential energy storage. However, the real drivers for the company's renewable energy strategy are more likely to be riding the continued growth in traditional residential solar and selling energy storage products into niche markets, such as peak demand stop gaps for utility companies. Even then, the market opportunity is less -- and the competition more -- than investors properly gauge.

Shareholders today may benefit from the Musk Halo Effect -- which attaches a premium valuation to, or boosts, public goodwill of companies and projects he's involved with -- but that doesn't mean investors should bank on it lasting indefinitely. It's the simple reason why I won't be buying Tesla.