Please ensure Javascript is enabled for purposes of website accessibility
Log In Help Join The Motley Fool
Free Article Join Over 1 Million Premium Members And Get More In-Depth Stock Guidance and Research
By Daniel B. Kline - Mar 12, 2017 at 10:00AM

The company's CEO shared details on how he expects to save the company.

Sears Holdings (SHLDQ) has been in freefall, closing stores, losing customers, and seeing sales plummet. Many think the company won't be able to reverse that trend, but the market responded well when CEO Eddie Lampert laid out the next steps in his turnaround plan for the company in mid-February.

Even though Sears has had quarter after quarter of losses, Lampert, thinks the chain has made progress. In a letter to investors, he went over the moves the company has made, including the closing of 108 Kmart and 42 Sears stores throughout 2017, as well as the sales of the Craftsman brand. 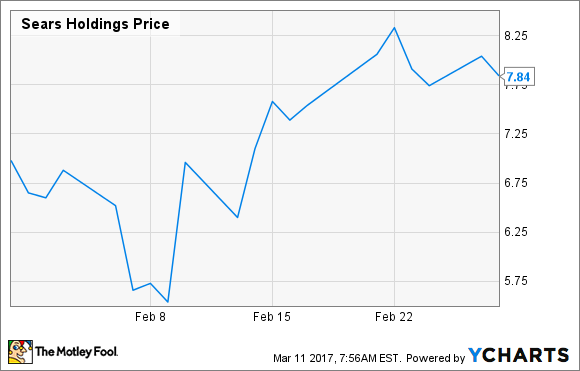 "To build on our positive momentum, today we are initiating a fundamental restructuring of our operations that targets at least $1 billion in cost savings on annualized basis, as well as improves our operating performance," he said. "To capture these savings, we plan to reduce our corporate overhead, more closely integrate our Sears and Kmart operations, and improve our merchandising, supply chain, and inventory management."

Lampert laid out more specifics -- such as plans to sell the company's other house brands -- but nothing he said was new. Investors didn't seem to care, and after his letter was released, shares spiked. After closing January at $6.98, the company's stock price jumped to $7.84 to close February, according to data from S&P Global Market Intelligence.

People seem to desperately want Sears to have a path to survival, but the numbers look lousy. The company lost $607 million in Q4 and saw revenue drop $1.2 million during the quarter and $3 billion for the year. The chain has restructured some its debt to buy itself more time, and it does have assets to sell, but the company still has $4.2 billion in long-term debt.

Lampert has shown an ability to make financial moves that forestall Sears' end, but he has shown no ability to stabilize sales or make money. The company has been shrinking, and its remaining stores keep losing money. There's no reason to believe that will change, given the ongoing market conditions and the fact that consumers must have at least some doubts as to whether buying something at Sears is worth the risk that the chain will go out business.

This stock bounce has people believing what Lampert said but not really looking at the business reality. Sears has more runway, but selling off assets to keep your creditors at bay is not the same as making money, something the company hasn't done in a very long time.