Please ensure Javascript is enabled for purposes of website accessibility
Log In Help Join The Motley Fool
Free Article Join Over 1 Million Premium Members And Get More In-Depth Stock Guidance and Research
By Beth McKenna - Updated Mar 13, 2017 at 8:08AM

A new material that can replace metal in many applications, a transitioning strategy, and solid recurring revenue growth were among key topics the 3D printing company's management discussed.

Stratasys (SSYS -0.32%) reported its fourth-quarter and full-year 2016 results on March 7. The diversified 3D printing company's year-over-year quarterly revenue increased 1.1% and adjusted earnings per share improved to $0.15, from negative $0.01 in the year-ago period.

Shares of Stratasys closed more than 9% down on the day earnings were released. While the company's quarterly results blew by Wall Street's estimates, the market was no doubt disappointed that 2017 revenue and adjusted earnings guidance came in lighter than analysts were expecting.

Earnings releases generally don't provide much information beyond the numbers, but a wealth of color about a company's performance and future prospects is often shared during the analyst conference calls following these releases. Here are four key things that you should know about from Stratasys' Q4 call. 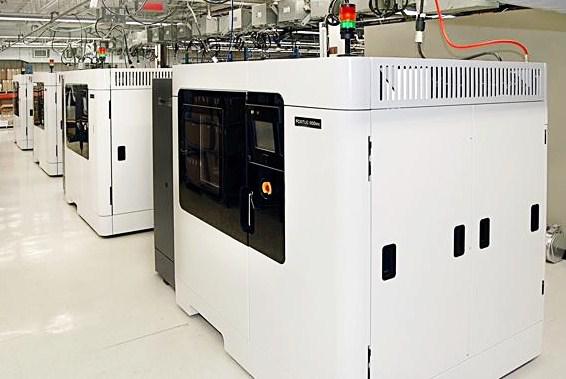 Stratasys' Fortus 3D printers. The company has developed a new material, Nylon 12CF, for its Fortus line that can replace metal in many applications.

1. New Nylon 12CF material can replace metal in many applications

[W]e recently announced our new Nylon 12CF material for our FDM [fused deposition modeling] platforms. Nylon 12CF is a new carbon-fiber-filled thermoplastic that is strong enough to replace metal in many applications. We believe the new material will be valuable to users within the automotive, aerospace, recreational goods, and industrial manufacturing sectors...

Stratasys introduced Nylon 12CF on the same day it released earnings, and said that it expects this new material to be available in the second quarter of this year. Nylon 12CF "contain[s] 35% percent chopped carbon-fiber by weight [and] offers the best stiffness-to-weight ratio among Stratasys' FDM thermoplastics."

Unlike rival 3D Systems, Stratasys doesn't have a metal 3D printing technology, so it's a particularly big plus that it has developed a material that can replace metal in many 3D printing applications.

2. Transitioning to a more customer-centric company

We are also making significant progress in transforming our business into a more customer-centric organization that emphasizes leveraging our extensive technology and application knowledge into value-added solutions for users within key vertical markets. This renewed focus is being supported by an increasing number of high-profile collaborations we have recently announced with industry-leading manufacturing companies such as Siemens, Airbus, McLaren Racing and Team Penske.

Stratasys has been shifting its strategy from developing one-size-fits-all products to working more closely with companies within key vertical markets (aerospace, auto, and healthcare) to develop solutions to meet their specific 3D-printing application needs. These applications could include advanced prototyping, tooling production, and/or parts manufacturing.

Such a strategy should build closer customer relationships, and enable Stratasys to leverage the knowledge learned by collaborating with a specific customer to other potential customers within the same industry.

Levin added that such a strategy lengthens sales cycles, which makes providing forward guidance more challenging. I think investors can infer from his comments that Stratasys' 2017 guidance is quite conservative.

3. Recurring revenue continues to roll in

[W]e observed favorable trends around system utilization as well as strong demand for our premium materials, which contributed to consumables revenue increasing by 11% as compared to the same period last year. The growth in our premium materials supports our focus on specific value-added solutions with target industry markets. ... Within service revenue, customer support revenue, which includes revenue generated mainly by maintenance contracts on our systems, increased by 8% compared to the same period last year, driven primarily by growth in our installed base of systems.

While Stratasys' quarterly results were considerably improved versus the year-ago period, they still reflect a challenging market. Nonetheless, the company's recurring revenue stream was solid, thanks to the power of its razor-and-blade-like business model. Such a model results in revenue from the "blades" (consumables/print materials and 3D printer service contracts) continuing to roll in as more "razors" (3D printers) are sold. Consumables (print materials) have a higher profit margin than the company's average, which makes growth in this category particularly desirable.

The following is from Levin's response to an analyst whose basic question was whether Stratasys' main focus was on more deeply developing its FDM and PolyJet technologies or on expanding the number of its technologies to include such things as a metal technology. (Stratasys has three techs: FDM and PolyJet, which are both polymer-based techs, plus wax deposition modeling, or WDM, which is used for dental applications.)

[W]hen we engage our customers increasingly, specifically on tooling or on manufacturing opportunities, we see a very strong pull based on the FDM and PolyJet technologies. So there's no reason for us to feel that we don't have a very bright future and a lot of good things to do within those two technologies. ...

[I] think the two demonstrators, as an example, that we exhibited back in September at IMTS [the International Manufacturing Technology Show] on the Robotic Composite and Infinite-Build are good examples of where we can continue to take our current, well proven, stable technologies...

While the company's focus seems to be on more deeply developing its existing polymer techs, I don't think Levin's response should rule out that Stratasys will eventually acquire or develop other technologies, such as one for metals.

Infinite-Build and Robotic Composite are FDM-based, next-generation technologies targeted at manufacturing applications, though they could also be used in advanced prototyping applications. Infinite-Build, which is being developed with Boeing and Ford, is designed for low-volume production of large thermoplastic parts, and the Robotic Composite, which is being developed with Siemens, is designed for the automated production of composite material structures.