Autonomous vehicle technology is all the rage right now, and that's being reflected in the valuations that both start-ups and established companies are fetching. The latest move in the space is today's announcement that Intel (NASDAQ:INTC) is acquiring Israel-based Mobileye (NYSE:MBLY) in a blockbuster $15.3 billion deal that will immediately and dramatically expand Intel's position in the market for autonomous vehicle technology while giving the chip giant relationships with over a dozen of the most prominent automakers in the world. The two companies, along with BMW, partnered last year with the goal of bringing fully autonomous vehicles to market by 2021. Apparently, Intel liked what it saw.

Last year saw two prominent self-driving car start-up acquisitions: GM picked up Cruise Automation for nearly $690 million, followed shortly by Uber scooping up Otto for $680 million (which is now the subject of litigation). Both of those target companies were comprised of small teams, and neither company was generating revenue. 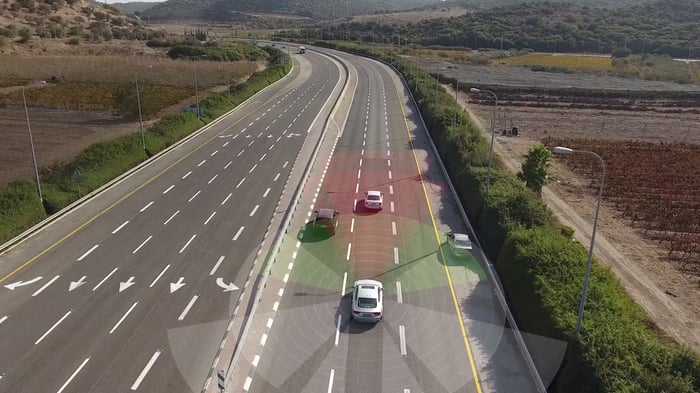 Mobileye generated $358 million in revenue last year and $108 million in net income, meaning it's getting taken out at 42.7 times sales and 141.7 times earnings. That context also helps explain NVIDIA's lofty valuation, as well as its share gains today, given its own burgeoning autonomous vehicle ambitions.

Intel estimates that the total addressable market for automated driving systems, data, and services will reach $70 billion by 2030, and believes it will be the best positioned to capitalize after combining Mobileye's computer vision strengths with Intel's computing and data center expertise. Mobileye's EyeQ chips are installed in roughly 16 million vehicles worldwide as of 2016.

The deal is expected to be immediately accretive to non-GAAP earnings and free cash flow, and the combined company hopes to generate $175 million in annual cost synergies by 2019. That's an incredibly optimistic estimate for synergies, given the fact that Mobileye's total operating expenses were $150 million last year, but part of that total is expected to come from tax-related synergies around intellectual property sharing as well. Intel is funding the deal with offshore cash ($13.6 billion out of Intel's $17.1 billion in cash was located outside of the U.S. at the end of 2016).

After famously missing out on mobile, which has been one of the most significant shifts in personal computing, Intel is determined not to let that happen again. Considering the high price tag, the onus will be on Intel to justify the premium and follow through with execution.