McDonald's (NYSE:MCD) and Burger King, now owned by Restaurant Brands International (NYSE:QSR), have defined the fast-food space for over a generation.

The two burger mavens have battled for decades in ad campaigns, price wars, and menu items, defining the fast-food industry along the way. Each chain has its trademark burger -- McDonald's with the Big Mac and Burger King with the Whopper -- and its own signature characters. Globally, McDonald's is the much larger of the two with about 35,000 locations, compared to Burger King with about 15,000 locations. Though both stocks have been on the upswing lately, Restaurant Brands International (RBI) has outperformed the Golden Arches since its 2014 IPO. As the chart below shows, both companies have handily beaten the S&P 500 in that time. 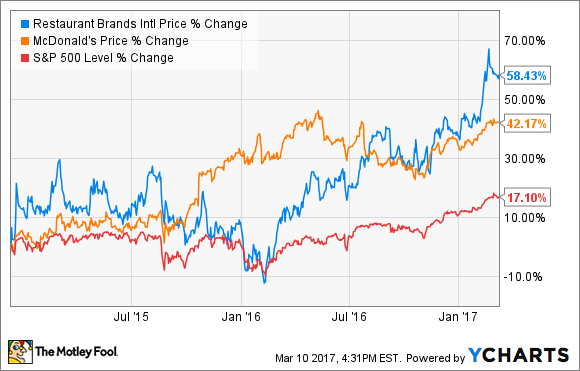 Though RBI has been the better stock so far, that's no guarantee of its success in the future. Below, we'll examine where each company stands today to see which is the Better Buy of the two.

Mickey D's looks to the future

Steve Easterbrook took over as CEO of McDonald's in March 2015, around the time Restaurant Brands had its IPO, and he deserves much of the credit for the stock's success since then.

The CEO took several steps to revamp McDonald's menus, including eliminating unpopular, healthier items like salads that didn't fit with the overall brand. He also committed to better animal welfare in the food supply as the company stopped serving chicken treated with human antibiotics and said it would eventually switch to cage-free eggs.

But Easterbrook's most important decision has been introducing all-day breakfast to domestic locations, which answered a long-standing customer demand and drove same-store sales more than 5% higher in the first six months following the decision. A year after that, however, McDonald's domestic comparable sales have turned negative again, following a wider trend in the industry that some have called a "restaurant recession."

In response, Easterbrook unveiled the latest step in McDonald's growth plan earlier this month, which included initiatives in delivery, digital capabilities like in-store kiosks, and allowing customers to place orders and pay for them on a mobile app like Starbucks does. The company also plans to modernize U.S. real estate and return $22-$24 billion in cash to shareholders. Easterbrook has also been dedicated to refranchising restaurants, borrowing a page from Burger King, and plans to have 93% of global stores franchised by the end of the year.

Finally, Easterbrook projected systemwide sales growth of 3-5% and high-single digit EPS growth in 2019 and beyond, a promise to investors of steady, long-term growth. For years, Burger King was getting left behind by McDonald's. But the company revamped under CEO Daniel Schwartz, who stripped down costs, beefed up the menu with low-price items, and aggressively refranchised restaurants. In 2014, Burger King combined with Canadian coffee chain Tim Horton's, and went public under the name Restaurant Brands International. Schwartz has followed a similar playbook with Tim Horton's, finding success as comparable sales have grown along with profits and store counts.

In 2016, comparable sales rose 2.5% at Tim Horton's and 2.3% at Burger King, a solid performance considering the recent headwinds in the industry. Meanwhile, store count increased by close to 5% at both locations as the company continues to expand aggressively, and adjusted earnings per share jumped 45% to $1.58 due to cost controls, refranchising, new stores and comparable sales.

Restaurant Brands International, which has the backing of hedge fund titans like Warren Buffett, 3G Capital, and Bill Ackman, doubled down on its growth strategy when it acquired Popeye's Louisiana Kitchen (NASDAQ:PLKI) a week after the earnings report.

The popular fried chicken brand will give RBI another lever to pull abroad as it seeks to expand the brand and refranchise stores. RBI paid $1.8 billion, or $79 a share for Popeye's, a 19.5% premium over the stock's previous closing price. Popeye's already has 2,600 stores in 25 countries, proof of its brand strength, but it's still smaller than RBI's two other chains, meaning the parent will likely ramp up its expansion as it's promised to do. The deal is expected to close in April.

Who's the tastier play today?

Both McDonald's and RBI seem to have promising futures ahead of them. Under the stewardship of Easterbrook, McDonald's has shown it can adapt to changing customer expectations and become a "modern, progressive burger company," as he's said he wants the company to be.

RBI's formula of ramping up expansion, spending on marketing, and cutting other costs has proven hard to beat for traditional fast-food chains.

McDonald's offers the better dividend at 2.9% vs. RBI's 1.3%, and is also cheaper at a P/E of 23.5 against RBI's 37.6. However, RBI's stronger earnings growth and expansion strategy, especially with Popeye's now under its earnings belt, means it's more likely to deliver higher returns in the future. Though there are arguments for both stocks, RBI is the better one for investors looking for growth. Dividend investors, however, may prefer McDonald's as a value play.