An analysis of the company's suitability for long-term investors looking for income from dividends.

3M Co. (MMM -1.67%) has increased its dividend for 59 years in a row and is one of the most highly regarded stocks in the industrial sector. That said, any investment analysis of a stock's value must be forward-thinking, as well as mindful of the company's history. The key question is whether 3M can be relied upon to deliver for income investors in the future or not. Let's take a look at what it means to invest in 3M stock.

In order to judge whether 3M is worth buying for income investors, it's a good idea to start by looking at its 10-year trends. As you can see in the table below, net income only grew at a 2.4% average rate in the last decade. It's a rate similar to that of peer Illinois Tool Works (ITW -2.93%), but note that Illinois Tool Works' revenue declined slightly -- partly due to the jettisoning of lower-margin businesses.

In other words, Illinois Tool Works is doing a better job of expanding margin, and has a lower payout ratio (dividends as a proportion of earnings), meaning it has greater capacity to increase its dividend.

Time to look closer at 3M and what it can do to increase its growth rate. 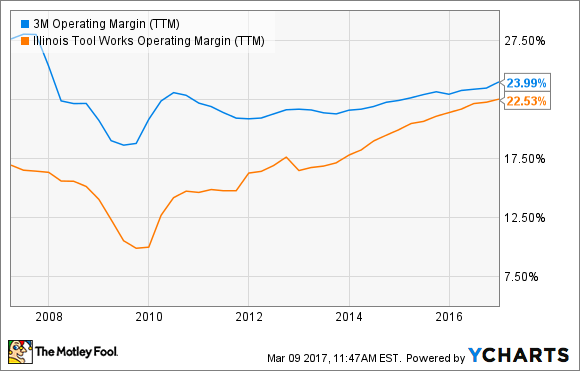 You can see from the breakout of its revenue in 2016 in the chart below that the company is broadly diversified. As the chart demonstrates, 3M makes money from a range of industries, so the stock can be seen as a play on industrial production growth. 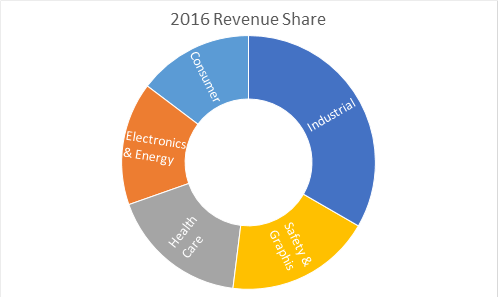 However, that's not the full story. In reality, 3M's ability to grow its earnings over the long term -- and let's recall that CFO Nick Gangestad believes 3M's dividend should grow in line with earnings over time -- also depends on three key factors:

Deeper analysis of the three drivers

Frankly, there are doubts concerning all three.

Management's argument is simple with regard to GDP-per-capita increases. As countries and their middle classes expand, they should start spending more money on things like infrastructure, healthcare, home improvement, and construction safety solutions. All of the categories play to 3M's core product strengths, and with international sales making up 59% of 3M's sales in 2016, the company is very much poised to benefit from global trends.

However, at the end of 2012, international sales made up a larger portion of total sales, at 64.8%. In other words, the evidence is that 3M isn't quite expanding internationally as it may have hoped.

As fas as margin expansion is concerned, as you can see in the first chart above, 3M has been expanding operating margin in recent years, but it's increasingly relying on share buybacks and building up debt in order to grow earnings per share (EPS). Meanwhile, its payout ratio has gone up from 34.3% a decade ago to 54.9% in 2016.

It doesn't appear that 3M is finding it easy to grow EPS significantly more than revenue without the help of buybacks and debt.

Finally, the following graph shows how R&D expenses have increased in recent years. In fact, management plans for R&D as a share of revenue to increase again in 2017, to 6%. It's an indication that 3M is finding it harder to drive sales growth through production innovation. Ultimately, if R&D expenses keep creeping up, it will constrain margin growth -- and in turn earnings, cash flow, and dividends. 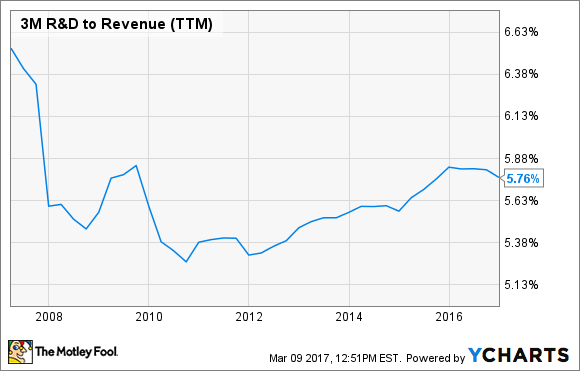 Is 3M a buy for income investors?

You could do a lot worse than buy 3M, but given the doubts over its ability to significantly expand revenue and margin over time, I believe there are better ways for income investors to invest. Sure, stronger economic growth would undoubtedly help the company, but you could say that about a lot of industrial stocks -- and there are plenty of other stocks available that aren't using buybacks and debt in order to boost EPS.