Please ensure Javascript is enabled for purposes of website accessibility
Log In Help Join The Motley Fool
Free Article Join Over 1 Million Premium Members And Get More In-Depth Stock Guidance and Research
By Daniel B. Kline - Mar 14, 2017 at 9:06AM

The company had a good quarter, but that was not its biggest news.

At a time when many restaurant companies are struggling, Restaurant Brands International (QSR -0.14%), or RBI, the parent company of Burger King and Tim Hortons, has found a recipe that works. Investors are betting that the company can use what it's learned from its two existing brands to help it find the same success with its latest purchase. 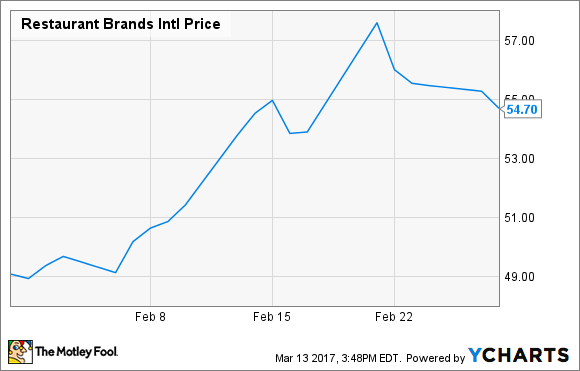 RBI stock, as you can see above, climbed steadily for most of the month. That was partly fueled by a strong earnings report, but the numbers really spiked when it became public that the chain planned to buy Popeyes Louisiana Kitchen (PLKI). The deal, which was announced Feb. 21, will pay shareholders in the fast-food fried-chicken chain $79 a share in cash, or $1.8 billion, a 27% premium over where shares had been trading. 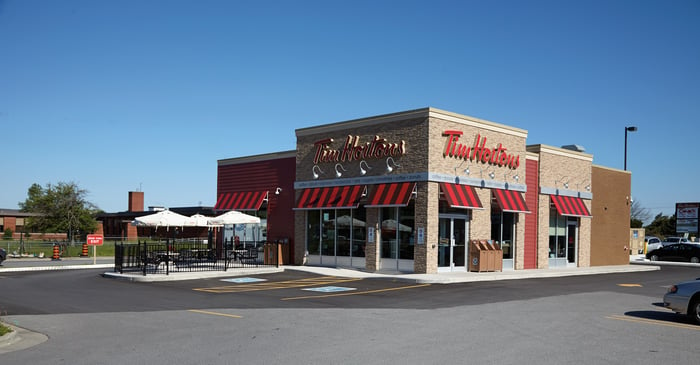 Tim Hortons has been growing its store count under RBI. Image source: RBI.

Investors like the move because RBI has done well with its two existing chains, and many clearly expect it can raise sales and profits at Popeyes. The pending deal helped shares in the company build on momentum that began when it reported earlier in the month. After closing January at $49.08, RBI shares rose to $54.70 at the end of February, an 11% gain, according to data provided by S&P Global Market Intelligence.

When it comes to a franchise-based business, RBI has its model down. The company has minimal risk, as franchisees own most of its restaurants, and Popeyes fits that business model, as well. Adding another brand should make RBI more efficient, as it should be able to cut overhead for the chicken chain on the corporate level.

Popeyes has over 2,600 stores -- making it a little more than a 10% addition to RBI's previous global total of over 20,000 restaurants in more than 100 countries. The chain will retain some independence in management, like Burger King and Tim Hortons, while taking advantage of the RBI infrastructure.

"With this transaction, RBI is adding a brand that has a distinctive position within a compelling segment and strong U.S. and international prospects for growth," CEO Daniel Schwartz said in the press release. "As Popeyes becomes part of the RBI family we believe we can deliver growth and opportunities for all of our stakeholders including our valued employees and franchisees."

That's the model the company followed with Burger King and Tim Hortons. Investors are confident it can repeat that model, and there's little reason to doubt that it will.