Please ensure Javascript is enabled for purposes of website accessibility
Log In Help Join The Motley Fool
Free Article Join Over 1 Million Premium Members And Get More In-Depth Stock Guidance and Research
By Brian Stoffel - Mar 15, 2017 at 9:00AM

This is an epic battle between two up-and-coming stocks.

One of the most important terms for forward-looking investors to understand is SaaS. This four-letter term stands for Software-as-a-Service. And companies that have mastered SaaS are becoming very lucrative investments.

Perhaps the easiest way to envision this is to remember what it was like -- and still is for some -- to install Microsoft's Office Suite onto their computer. And really, 15 years ago, who could afford to go without the bare minimum of Microsoft Word on their computer?

The installation process -- using a CD -- was time consuming, and only applied to one device at a time. But now, Microsoft Office 365 allows paying members to access the software via the cloud from any connected device. Another way of thinking of it is on-demand software that you subscribe for. 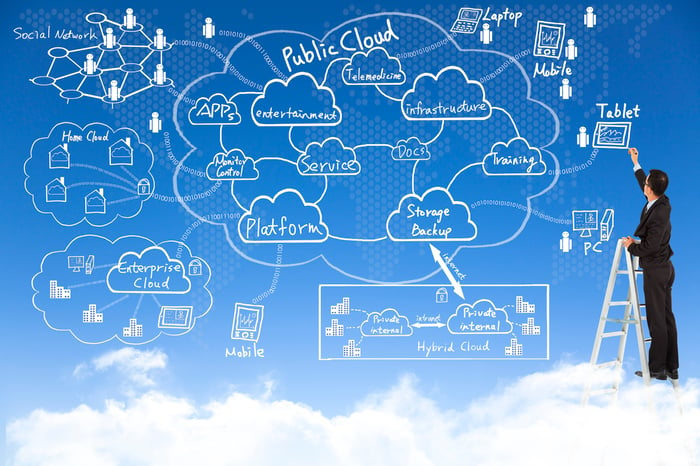 But there are lots of other examples of such technology, and they are gaining popularity at a breakneck pace. Veeva Systems (VEEV 3.56%) provides cloud solutions that help drug companies do everything from manage their sales force to keep track of FDA clinical tests for the drug approval process. Shopify (SHOP 5.88%), on the other hand, is an SaaS company that provides a one-stop shop for any entrepreneur or medium-sized business to establish an e-commerce presence.

Both stocks have been very successful as of late, but which is the better buy today? That's impossible to answer with 100% certainty, but there are different lenses through which we can examine the question. Here are three of the most relevant and how Shopify and Veeva compare.

I wish I could go back in time and explain to my beginning-investor self just how important sustainable competitive advantages are. Often referred to as a "moat" by professional investors, this represents the special something that keeps customers coming back month after month, while keeping competitors at bay for decades.

The moat for Shopify and Veeva can be described in three short words: high switching costs.

Let's put ourselves in the shoes of a typical Veeva customer for a second. You're a medium-sized biotechnology firm. You use Veeva CRM to manage your sales force -- which includes everything from a customer database, to secured email communications.

You also use Veeva Vault to capture electronic data that's crucial for your FDA approval, and to make sure that you're abiding by all of the relevant government regulations. It took you weeks to train all of your employees to use and communicate on Veeva's platform. But now that they are familiar with the platform, your company's efficiency has skyrocketed.

How much of a headache would it be -- both from an operational and financial standpoint -- to switch to another provider for all of these mission-critical functions? As long as Veeva doesn't start jacking up prices to the point where they are prohibitively expensive, you'd much rather focus your time and energy on your core business mission.

The same can be said for Shopify. The company has three different tiers of subscriptions to help you start and maintain your e-commerce presence. Once you reach the highest level, Shopify can help you not only manage your website, but it also offers payment processing and shipping services.

Those are big deals, and if your company grew up with Shopify as the platform of choice, you would be equally loathe to switch to a different provider after years of familiarity, data, and training using its products.

Both of these companies have very strong moats, but in the end, this is a draw.

One important thing to note is that financial fortitude is especially important for young SaaS companies. It takes enormous up-front investments to set up the infrastructure necessary to become successful in the field. If a company doesn't have a reliable cash stash to act as a safety net, the smallest bit of chaos could wipe the balance sheet clean.

Here's how these two companies stack up in terms of financial fortitude.

I cannot stress enough how important it is that neither Shopify nor Veeva has any long-term debt to speak of. That makes them infinitely healthy.

It's worth mentioning that because these companies operate using a subscription-model, there's often a lag between large contracts being signed, and revenue actually being collected.

It's also important to point out that while Shopify has yet to be profitable, it should have no problem running its business. With a loss of only $10 million in cash flow over the past year, there's more than enough cash on hand for the business to aggressively reinvest in growth opportunities.

But if we're forced to choose a winner here, Veeva has the edge by a nose. Being able to produce free cash flow is a definite bonus, and one that we shouldn't ignore.

Because of the aforementioned cash flow and income situation at Shopify, this is a relatively easy category to pick a winner in. Even on the one metric where we do have some apples-to-apples comparison, Shopify appears to be trading at a 25% premium.

Though Veeva isn't cheap by any stretch of the imagination, it's profitable -- and thus, easier to measure its relative value.

So there you have it: Veeva would appear to be the better bet today. The company's profitability gives it a slight edge over Shopify. But to be honest, I think these are two of the most exciting mid-cap stocks to invest in today.

Right now, Shopify is purposely spending a little more than it brings in via sales -- so analysts just have to accept that it won't be profitable for a while. But in the process, it is capturing massive market share. Combine that market share with high switching costs and all the company would have to do to be profitable is turn off its spending spigot a little bit and income would boom.

That's why I own both of these stocks in my personal portfolio, and they combine to make up over 5% of my real-life holdings. I think you'd do your future self a huge favor to take a look at both for your own retirement portfolio.