Amazon (NASDAQ:AMZN) had a surprise hit on its hand with the Echo smart speaker. After releasing it exclusively to Prime members in late 2014, the device proved so popular that Amazon was able to quickly open orders to everyone in the U.S. by the following summer. On Christmas Eve of 2015, the Echo was one of the top five items ordered, according to Amazon's annual holiday press release. Last year, Echo device sales climbed nine times compared to 2015's holiday season.

However, Mahaney is changing his tune after conducting a more in-depth survey. "Home's awareness and installed base could be much closer to Alexa -- with a brand awareness in the U.S. 80% that of Alexa and an installed base that may be close to a third that of Alexa," he recently wrote in a note.

It looks like Google Home is quickly catching up to Amazon's Echo. 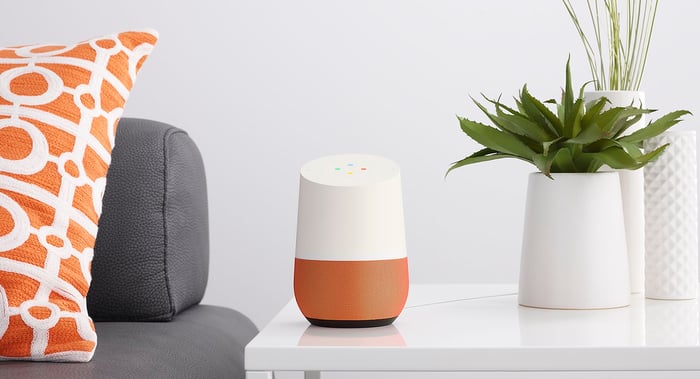 Google plans to keep making Google Home a better device by improving its search capabilities and functionality. "We are going to invest a lot in it over 2017," Google CEO Sundar Pichai told investors on Alphabet's fourth-quarter earnings call. "I think there is a lot of work ahead to make all of this work well for users. And this is the core area where we've invested in for the very long term," he added.

Google intends to leverage its massive Android platform to continue improving Google Assistant, the artificial intelligence (AI) behind Google Home. At least 200 million devices will have access to the voice assistant, which will provide Google with a lot more opportunities to learn exactly what people are looking for when they say, "OK, Google."

Google will also have to improve Google Home's capabilities. The device currently has around 80 Actions, which is nothing compared to the 10,000-plus functionalities available with Alexa. To that end, Google launched the Actions on Google developer kit in December.

While Google Home sales are improving relative to Amazon Echo, it's not clear device sales will follow a similar path. Google Home lacks one of the key functionalities of Amazon's devices: the ability to easily shop on Amazon.

Seventeen percent of Echo owners use Alexa to place orders on Amazon, according to Mahaney's survey. As the number of devices in use grows, Mahaney expects the amount of shopping done via Alexa on Amazon to grow as well. By 2020, sales through the voice assistant could reach $5 billion, according to the analyst's estimate.

Google doesn't even have a business model for monetizing Google Home beyond hardware sales. Search and display ads don't work very well on a device with no display.

Moreover, Google doesn't offer a compelling differentiating factor for consumers to pick its device over another smart speaker. Comparatively, Amazon Prime members, of which there's a rapidly growing number, have lots of reasons to pick the Echo, like easy access to ordering things on Amazon or inexpensive use of Amazon Music Unlimited.

As such, Amazon is poised to win the long-term competition even if Google Home is catching up in the short term.