The action-camera maker refocuses on its niche core customer base.

GoPro (GPRO 0.54%) CEO Nick Woodman once said that most GoPro customers use their action cameras to film "everyday activities." That statement stretched credulity, since it's hard to imagine an average consumer buying a $400 action camera in order to share their lunch on social media. This idea clearly didn't pass the sniff test. Woodman said that on an earnings call in February 2016 as he was attempting to give his company a new identity and break out of the action-camera niche.

Action implies something kind of risky and dangerous that you're doing, but in truth the majority of our customers use a GoPro to film themselves having fantastic weekends with their families and perusing sort of more everyday activities and unlike a smartphone or a traditional camera where you need a third person to hold the camera to photograph or film you doing whatever it is that you love to do in life, with a GoPro you can film yourself.

Except "everyday" use cases are precisely what smartphones are good for, among a million other things. Smartphones have replaced numerous stand-alone product categories like point-and-shoot cameras, to name a few. There are also things called tripods. Woodman is finally realizing this. 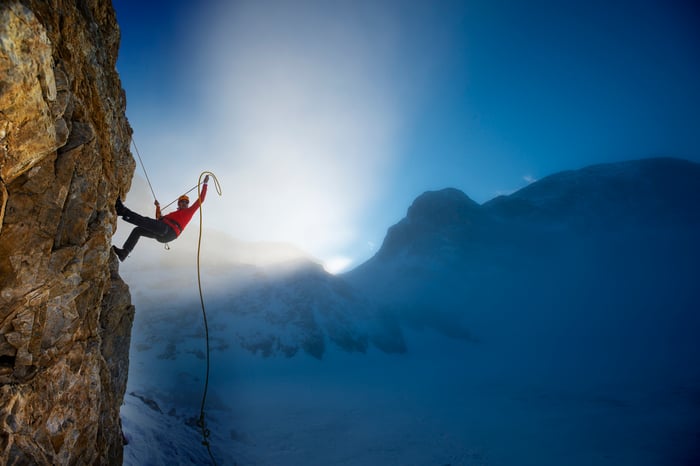 GoPro has just announced the third restructuring in recent months -- following two separate ones in 2016 -- that will see 270 positions eliminated as the company refocuses on its core customer base. At the end of 2016, GoPro had 1,552 employees, according to its 10-K. The company will incur restructuring charges of approximately $10 million, which will be recognized this quarter. This should bring full-year non-GAAP operating expenses down below $495 million.

The good news is that first-quarter revenue should come in at the high end of GoPro's guidance, which it had previously forecast at $190 million to $210 million. Thanks in part to that operating expense reduction, GoPro now hopes to achieve full-year non-GAAP profitability for 2017, which is quite a bit better than the consensus estimate of a $0.72 net loss per share.

"failed to align GoPro with the smartphone movement"

In an interview with CNBC, Woodman acknowledged that GoPro's approach in recent years has missed the mark:

Where we fell out a little bit in our post-IPO years was that we failed to make GoPro contemporary and failed to align GoPro with the smartphone movement. A smartphone has set a new bar for convenience, and a new bar for how much work a consumer is willing to put in to sharing themselves. With our new software solutions, we are much better aligning GoPro with consumers' use of a smartphone.

The fact that smartphones, and the cameras embedded in them, make sharing incredibly convenient is nothing new. What's more surprising is that it took GoPro this long to realize it, and that it ever thought mainstream consumers would purchase action cameras in meaningful volumes to capture everyday activities. The vast majority of the videos that GoPro shares across social media platforms entail action sports, like unicycling down the side of a mountain in Chile or speedflying in Canada.

Woodman acknowledges that GoPro spread itself too thin and tried too hard to bet in other areas, and the restructuring will allow it to refocus on its core customer base. In other words, GoPro is pulling back and embracing the niche that made it so successful in the first place. The problem has always been pursuing growth in other areas -- rather expensive pursuits -- where its value proposition was incredibly weak. GoPro can be a successful and profitable, if niche, business, and this announcement implicitly acknowledges that. The company just needs to accept that it was never meant for the mainstream.