Please ensure Javascript is enabled for purposes of website accessibility
Log In Help Join The Motley Fool
Free Article Join Over 1 Million Premium Members And Get More In-Depth Stock Guidance and Research
By Brian Feroldi - Updated Mar 17, 2017 at 8:08AM

Looking to put money to work in this $322 billion market? Here are three stocks for you to consider.

Nearly 30 million Americans have diabetes -- a condition where the body fails to properly metabolize sugar. Left untreated, that sugar builds up in the bloodstream and the body, which can lead to a number of serious additional health problems such as cardiovascular disease, kidney disease and eye disease.

Treating diabetes is expensive, costing America alone some $322 billion each year. Naturally, a market that big has attracted plenty of companies to focus on the disease state. Novo Nordisk (NVO 0.19%), Insulet (PODD 3.91%), and DexCom (DXCM 4.16%) are three such businesses, and I think that they all could be great choices for investors. 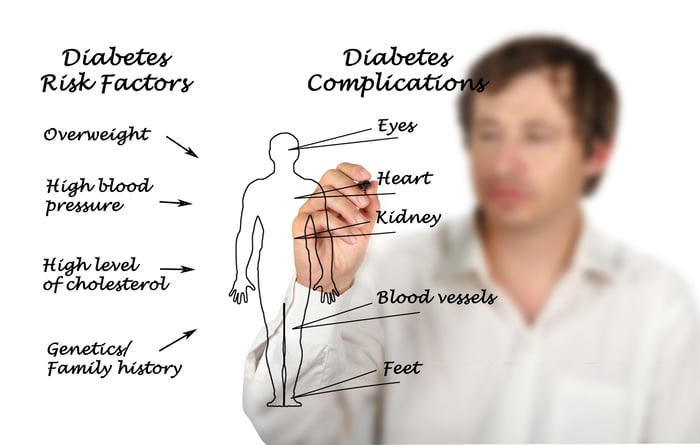 Many people who have diabetes take drugs to help keep their blood sugar levels in check. One of the long-term leaders in the industry is Novo Nordisk, a Danish drugmaker that has been selling insulin for nearly a century.

Novo's top line has charged upward for years as it brought new treatments to market. Recent hits include Tresiba, a long-acting insulin that has been taking share from Sanofi's megahit Lantus, and Victoza, a GLP-1 inhibitor that lowers blood sugar levels and tends to help some patients lose weight. Novo also boasts a number of new drugs that should be coming to market soon, such as the recently FDA-approved Xultophy, which combines Victoza and Tresiba, and Fiasp, an ultra-fast rapid-acting mealtime insulin.

And yet, despite its long history of successful drug development and its leadership position in treating an increasingly common disease, Novo's share price and valuation have been crushed over the past year. 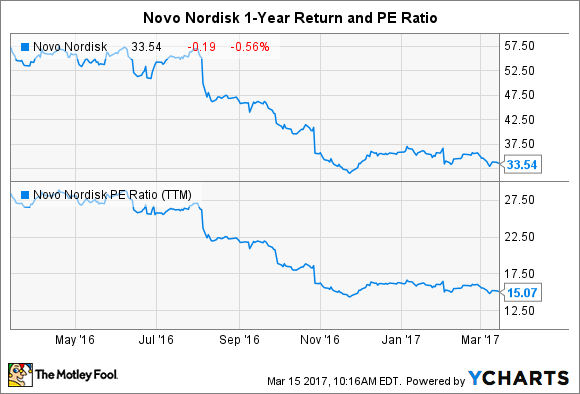 What gives? You can blame the decline on increasing pricing pressure from insurers on the company's legacy products. To maintain its market share, Novo has been offering discounts. As a result, management dropped its long-term profit growth target from 10% to 5%.

While the waning profit growth is disappointing, I can't help but think that the markets have overreacted. Novo's still cranking out profits, and it has a huge tailwind at its back, so I can't help but like its long-term prospects. With shares trading at a discount and offering up a dividend yield approaching 4%, I think this is a top stock for conservative investors to consider.

No tubes for you

Not every person who has diabetes requires insulin injections to stay healthy, but millions of them do. Those daily injections can be a pain, and dosing with precision can be difficult, which is why many insulin-dependent patients prefer instead to use an insulin pump.

However, wearing a pump presents its own issues. Traditional insulin pumps require tubing, which can easily get snagged or tangled during everyday living. To solve that problem, Insulet launched a patch pump called the OmniPod that is worn directly on the body and disposed of after three days of use. The device is also waterproof and features automatic cannula insertion, which makes it far easier for patients to place it in tough to reach spots.

Insulet's unique tube-free system has allowed it to gobble up market share over the last decade. Better yet, the company's "razor-and-blade" business model creates a lot of recurring revenue. When combined, the company's top-line -- and share price -- have soared. 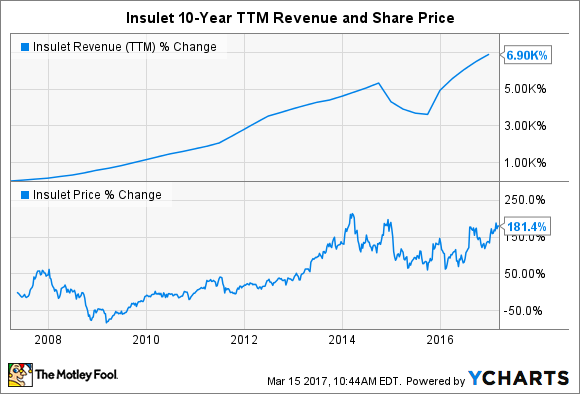 While Insulet is still losing money, there's reason to believe that profits could finally be on the horizon. Revenue from the company's core OmniPod business is still growing by double-digit percentages both stateside and abroad. Meanwhile, the other drug delivery business is growing nicely, powered mostly by the company's partnership with Amgen. Margins are also on the rise and are expected to continue to push higher. Longer term, CEO Patrick Sullivan expects the company to pump out more than $1 billion in revenue. If the company can hit that ambitious target, its top line would nearly triple.

Of course, Wall Street is aware of the company's potential and has priced shares at more than seven times sales. While that's a pricey valuation, if the company can deliver on its growth targets, I could easily see shares continuing to outperform from here.

I sense a good opportunity

Many people with diabetes are required to measure their blood sugar levels at various times during the day in order to ensure it is within a healthy range. For most, this requires a finger prick to obtain a small blood sample that is tested on a monitor. As you may guess, this isn't a process that many people like.

In an effort to ease this burden, Dexcom launched a small medical device a decade ago that is worn on the body for up to seven days and continuously measures blood glucose levels. This information is then uploaded directly to a smartphone or other receiver, making it far easier for users to track their blood sugar, and allowing them to do it in real time.

This product -- now called the Dexcom G5 Mobile Continuous Glucose Monitoring System -- has been wildly successful. Like Insulet, Dexcom also benefits from a razor-and-blade business model, which has allowed the company's revenue to soar. In turn, long-term shareholders have been extremely well rewarded. 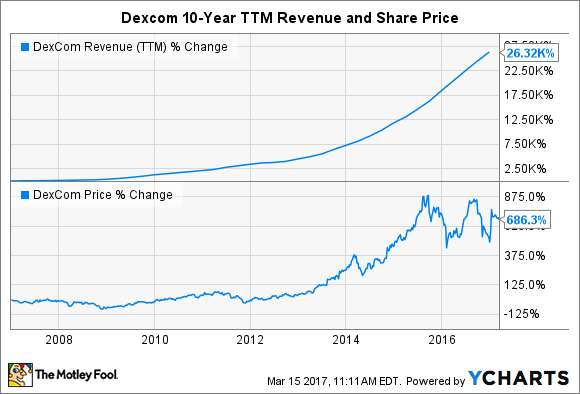 Despite its history of success, there's reason to believe that DexCom's growth engine is just getting warmed up. The company only counts 200,000 patients as active users, just a small fraction of the 415 million people with diabetes worldwide.

While Dexcom is still losing money, that's expected to change in 2017. However, Wall Street has caught on to this growth story and is valuing the company at 11 times sales. Despite that nose-bleed valuation, I still think shares could be worth owning since the company is closing in on profitability and staring down a massive growth opportunity. Share prices are likely to remain volatile for the foreseeable future, but if you are a growth investor at heart, I think that DexCom is certainly worthy of a closer look.