Follow @7investingSteve
Follow @7investingSteve
Adobe Systems Incorporated (NASDAQ:ADBE) announced its best-ever fiscal first-quarter results Thursday after the market closed, including record revenue, profits, and cash flow driven by strong adoption and retention for its Creative Cloud and Document Cloud products.
Let's zoom in on the driving forces behind its impressive start to the new fiscal year. 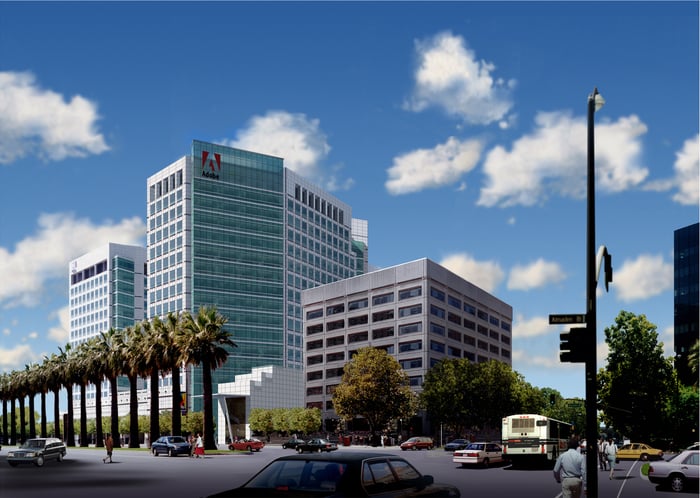 "Whether you're a designer, student, enterprise, or government agency, reimagining your customer experience has become a critical part of every digital transformation strategy," said Adobe CEO Shantanu Narayen. "Adobe's mission to help our customers design and deliver great experiences has never been more relevant, as is reflected in our outstanding Q1 results."

"Our solid execution and business momentum combined with strong market tailwinds give us confidence in our ability to continue to deliver strong financial results," Adobe CFO Mark Garrett added. "We remain bullish about our prospects for the rest of 2017 and beyond."

Narayen also touched on Adobe's $540 million acquisition of video-ad specialist TubeMogul last quarter, noting that the deal closed as expected in late December. As it stands, Adobe is working to complete the integration of TubeMogul with its current Adobe Media Optimizer solution, the combination of which will help Adobe customers optimize video, search, and display-ad investments across multiple ad mediums, from mobile to desktop, streaming devices, and television.

Finally, during the subsequent conference call, Adobe management revealed that it's targeting fiscal second-quarter 2017 revenue of $1.73 billion, including 24% year-over-year growth in Digital Media segment revenue, and 26% growth in Adobe Marketing Cloud revenue. On the bottom line, that should translate to GAAP earnings of $0.66 per share and adjusted earnings of $0.94 per share. By comparison -- and though we don't typically pay close attention to Wall Street's demands -- consensus estimates predicted slightly lower fiscal Q2 revenue of $1.72 billion, and lower adjusted earnings of $0.91 per share.

In the end, there was nothing not to like about this solid performance from Adobe. Given the continued outperformance and traction of its digital and recurring revenue initiatives, and its stronger-than-expected guidance, it's no surprise that shares rose in after-hours trading following the release of the earnings report.