When iRobot Corporation (NASDAQ:IRBT) launched its first Roomba 900-series robotic vacuum in late 2015, I mused that the advanced new bot was obviously its smartest yet. From visual navigation to its tangle-free AeroForce cleaning system, a Carpet Boost mode that automatically detects floor types, a Dirt Detect mode to identify areas with higher concentrations of dirt and debris, and cloud connectivity through its easy-to-use HOME app, it's no wonder the Roomba 900 series has has thrived despite -- as company co-founder and CEO Colin Angle put it last quarter -- "having the highest number of competitors we've ever seen."

But earlier this week, iRobot unveiled new cloud-based technology that not only improves Roomba's user-friendliness, but also marks a huge step in its initiatives to advance connected homes and the Internet of Things -- that is, the concept of adding internet-based functionality to everyday items. 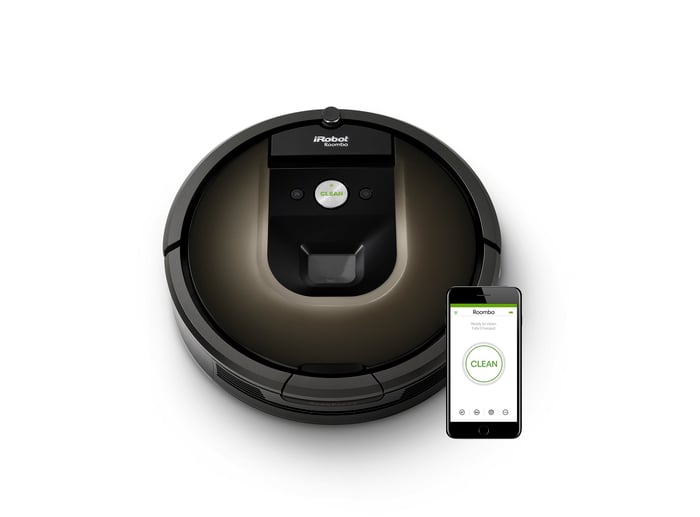 First, iRobot launched a new version of the HOME App that includes "Clean Map reports." These reports most notably provide visual post-cleaning maps created by the Roomba as it cleans, as well as useful information about the robot's cleaning performance such as the total square footage cleaned, the number and location of Dirt Detect events triggered, cleaning length, charging time, and any other errors or notifications the Roomba throws (for example, if the bin is full or the unit is stuck somewhere). The new app is already available for download.

What's more, iRobot is integrating Amazon.com's Alexa voice-activated control with all connected Roombas, which will let users start, stop, or pause Roomba cleaning jobs with simple voice commands like "Alexa, ask Roomba to begin cleaning." The Alexa skill for Roomba will be launched for U.S. customers in the second quarter and will be compatible with all connected Roomba vacuums. "Exciting next steps toward our vision..."

To be fair, these might seem like small improvements to iRobot's connected Roomba platform. But note that in its press release, iRobot tellingly refers to the moves as their "next step in the connected home."

iRobot is aggressively pursuing opportunities within the connected home to improve our customers' experience with our cleaning robots. The latest updates for the iRobot HOME App make cleaning with an iRobot Roomba vacuuming robot even more user-friendly, with voice-activated commands, enhanced mapping features, and useful post-cleaning reports. These are exciting next steps toward our vision of an ecosystem of home robots that work collaboratively and further enable the smart home. [Emphasis mine.]

To be sure, iRobot could easily segue this technology to allow households with larger floor plans to accommodate multiple Roombas working together. And while Roomba may generate the majority of iRobot's revenue as it stands, the company offers a number of other connected home robots. Those include its floor-mopping Braava jet model, which quickly became iRobot's No. 1-selling SKU in Japan following its introduction there last year. And based on recent FCC filings, we also know that iRobot is in the early stages of building a robotic lawn mower that would communicate and set its boundaries using a convenient wireless beacon system.

What's more, iRobot executives have spoken at length in recent years about using the cloud to allow their robots to learn more about their surroundings, which extends to both navigation and -- over the longer term -- even recognizing the best way to manipulate certain objects.

"For example," offered former iRobot CTO Paolo Pirjanian during a 2014 interview, "this object is a cup, and so I have to grab it like this; it looks like it's a glass, so I need to grip it tight enough so it doesn't slip, but not too hard so it breaks."

In short, this is only the tip of the iceberg regarding iRobot's connectivity and Internet of Things efforts. And as a longtime shareholder, I can't wait to see what's next.